His Excellency Björn Lyrvall
Ambassador of Sweden to the United States 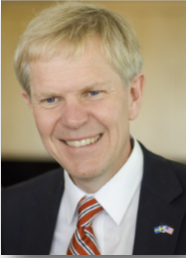 The University of Virginia Center for Politics and International Residential College in partnership with the University of Virginia Office of the President will host a public event featuring His Excellency Björn Lyrvall, Ambassador of Sweden to the United States. Ambassador Lyrvall will speak on current international issues related to Sweden, the Swedish social system, and the country’s relationship with the United States.

From 2007 until taking up his current position in September 2013, Ambassador Lyrvall was Director General for Political Affairs at Sweden’s Ministry for Foreign Affairs in Stockholm.

From 2002 to 2007, Ambassador Lyrvall was posted at Sweden’s Permanent Representation to the European Union in Brussels, first as Sweden’s delegate to the enlargement negotiations (2002-2003), and then as Sweden’s Ambassador to the EU Political and Security Committee (2003-2007).

Ambassador Lyrvall has also been working as Special Advisor to Sweden’s Minister for Foreign Affairs, Carl Bildt, in his role as EU negotiator and International High Representative in Bosnia and Hercegovina (1995-1997), as well as United Nations Special Envoy on the Balkans in 1999.

Born in Hofors, Sweden, in 1960, Björn Lyrvall graduated from Stockholm University with a degree in Political Science, Eastern European Affairs and Russian.

Björn Lyrvall is married and has three children.