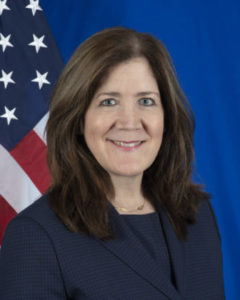 The Honorable Dorothy C. Shea, U.S. Ambassador to Lebanon, will speak as a part of the UVA Center for Politics’ Ambassador Series on topics such as the U.S. government’s relationship with the Lebanese government, the U.S. humanitarian response to the Beirut explosion, efforts to emerge with a greater level of cooperation between the countries, and how to advance a peaceful and prosperous Lebanon. Ambassador Shea will be introduced by Professor Larry J. Sabato, Director of the UVA Center for Politics, and Q&A will be conducted by Ambassador Stephen Mull, UVA Vice Provost for Global Affairs. Following Ambassador Shea, Daman Irby, UVA Center for Politics Director of Global Initiatives, will moderate a panel of three alumni from the U.S. Department of State’s Leaders for Democracy Fellowship which the Center for Politics hosted in 2016 and 2017. Michel Daccache, Yasmine Masri, and Mike Safadi will speak about their experiences in Beirut at the time of the explosion , the activities of themselves and their organizations during the recovery, and conclude with Q&A.