— Farmers and manufacturers account for a particularly large share of the economy in key battleground states, including ones that President Donald Trump won in 2016 and would need to win again in 2020 to secure a second term.

— However, the farm and factory sectors are facing economic strains from Trump’s trade policies. Agricultural output declined between 2017 and 2018 in all but one battleground state, and while manufacturing output increased in these states across the board between 2017 and 2018, it showed signs of slowing in most states during the first quarter of 2019.

— That said, anecdotal evidence suggests that cultural issues are outweighing economic factors, with these solidly Republican demographic groups sticking with the GOP, at least for now.

President Donald Trump has taken a hard line on trade. He’s imposed tariffs on steel, aluminum, and on a wide variety of Chinese products. In response, China has slapped tariffs on American products.

If Trump’s trade strategy poses risks for the economy, it also poses risks for his reelection strategy. That’s because farmers and manufacturers in battleground states are facing retaliatory tariffs on their products.

To measure Trump’s degree of risk, we analyzed 14 battleground states — 10 of them won by Trump in 2016 and four won by Hillary Clinton. (We ignored Nebraska’s competitive 2nd congressional district, and we looked only at Maine’s statewide electoral votes, not its competitive 2nd district. Both states allocate a portion of their electoral votes by congressional district.)

We began by measuring how dependent these battleground states’ economies are on two particularly trade-sensitive sectors: manufacturing and agriculture. Both sectors are at risk from retaliatory tariffs prompted by Trump’s confrontational approach to foreign trade.

We turned to data from the Bureau of Economic Analysis, calculating the percentage of each state’s gross domestic product coming from manufacturing and agriculture. We then added those percentages together and ranked the states from most dependent to least dependent.

Eight of the battleground states we studied are reliant on manufacturing and agriculture to a greater degree than the nation as a whole. In descending order, these eight states are Iowa, Wisconsin, Michigan, North Carolina, Ohio, Minnesota, Texas, and Pennsylvania.

Notice anything about these states? Trump won seven of them in 2016, making the core of his Electoral College majority at special risk from fallout from tariffs. Especially notable is the inclusion on this list of the three narrowly divided states that made his victory possible: Michigan, Pennsylvania, and Wisconsin. 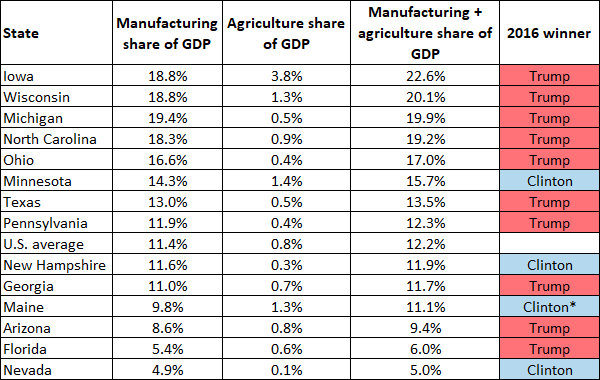 Next, we looked at how well each of these states is faring these days in agriculture and manufacturing.

As it happens, only one state saw agricultural production grow between 2017 and 2018 — Georgia. The other 13 states saw declines in the agricultural sector during that period.

And the worst-performing agricultural states? Six of the seven worst-faring farm states were won by Trump in 2016 — those same three cornerstone states (Michigan, Pennsylvania, and Wisconsin) plus Arizona, Florida, and North Carolina (see Table 2). Two other Trump states, Iowa and Ohio, also fared worse than the national average. 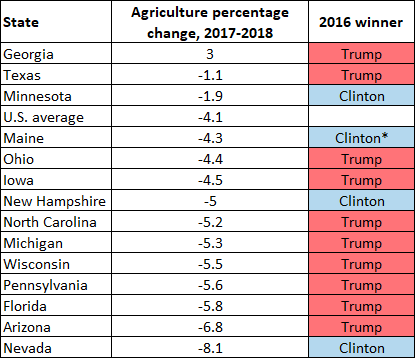 Trump can take some comfort in manufacturing performance (Table 3): All 14 battleground states saw growth in the manufacturing sector between 2017 and 2018. In particular, Michigan experienced growth well above the U.S. average, while Wisconsin narrowly beat the national average. 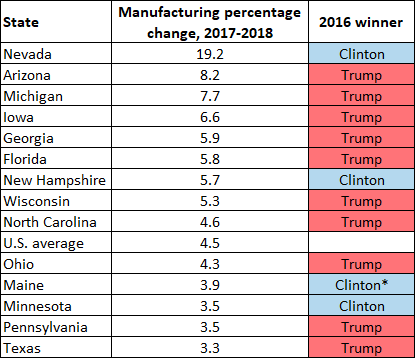 However, the most recent data available — the annualized change between the fourth quarter of 2018 and the first quarter of 2019 — shows a broad manufacturing slowdown.

Ten battleground states saw lower annualized manufacturing growth in the first quarter of the year than they saw during the previous full year. These included seven Trump-won states, three of which were the pivotal ones — Michigan, Pennsylvania, and Wisconsin (see Table 4). 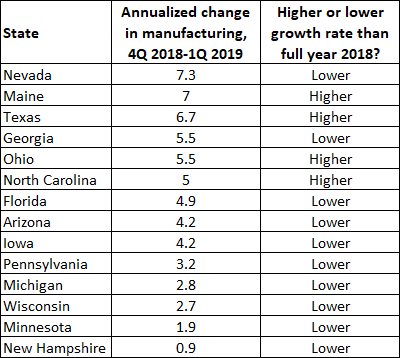 A key question, though, is whether any of this will matter electorally. When we checked with political observers in these states, they said that losses among farm and factory families pose a risk to Trump’s electoral prospects, but they added that there’s little hard evidence of that happening yet.

University of Northern Iowa political scientist Christopher Larimer — who calls this “the fundamental question heading into the 2020 election” — said he has “yet to see anything” that would suggest these voters are going to abandon the GOP in significant numbers. That could change as more polls are fielded as the election approaches.

In Texas, a Democratic nominee too far to the left could doom the party even as it consolidates its gains during the Trump era, said Rice University political scientist Mark P. Jones. Progressive policies targeted against the traditional energy sector would be enough, to say nothing of policies on social issues or guns, he said.

This would be “more than enough to keep Texas in the Trump column, even amidst some grumbling about the negative impact of Trump’s trade policies on economic prosperity in Texas,” Jones said.

Indeed, Trump allies aren’t without a case to make. They are essentially arguing no pain, no gain, said Bill Ballenger, publisher of the Ballenger Report, a politics newsletter in Michigan.

Trump backers argue that “after repeated backsliding by the Clinton, Bush and Obama administrations, Trump is finally making good on U.S. resolve to achieve real change in our trade policy,” Ballenger said. “It’s painful and it takes time, they say, but give Trump a chance to succeed.”

One unknown is whether Democrats make a play for these demographic groups, said Terry Madonna, director of the Franklin and Marshall College poll in Pennsylvania.

“The Democrats still have not been regularly courting the working class, except for an occasional foray into places they predominate,” he said. In Pennsylvania, he said, Democratic gains seem more likely to come from Republicans in suburban areas turning against the president.

Depressed turnout among disaffected farm and factory voters might be more likely than actually switching rural and blue-collar Republicans to support whoever the Democratic nominee is.

“The Trump promise has not hit home, but that does not mean they will not support him — the question is whether they will show up on Election Day,” said Philadelphia-based Democratic consultant Larry Ceisler.

Especially in the three pivotal states of Michigan, Pennsylvania, and Wisconsin, it wouldn’t take much to shift the balance.

Craig Gilbert, a political journalist for the Milwaukee Journal Sentinel, has reported extensively from the swing rural areas of western and southwestern Wisconsin. He said he hasn’t encountered any sign of mass defections from the historically strong levels of Trump support in 2016, but he added that it remains an open question whether more modest shifts could occur.

Trump “could still lose some folks on the margins, especially in those more purple or swingy rural places where he made big gains in 2016 but aren’t unambiguously trending Republican,” Gilbert said.

Bottom line: Trump’s trade policy could weaken his support in key states, but for now at least, there’s little evidence of widespread damage to Trump’s standing among the farm and factory demographics. Until further notice, cultural issues appear to be taking prominence over economic ones.