— Of eight the Crystal Ball rates as competitive, Republicans are defending all but one.

— Open seats, along with pending redistricting in North Carolina, give Democrats a small buffer as they defend their majority.

The open seats so far

The 2018 House election cycle was defined by an unusually large number of open seats. The 2020 cycle almost certainly won’t feature as many, but there are still more than two dozen so far. And just like in 2018, the open seats that cover competitive turf provide more opportunities for Democrats than Republicans.

The start of the holiday season is a good time to take stock of these open seats, because the number of retirements often increases as members consider their own futures with their families and as filing deadlines loom. Impeachment adds an additional wrinkle to the retirement calculus: Depending on the timing, it could cut into holiday family time, and — whatever one thinks of it — we doubt the process is making the House a more pleasant place to work.

Whoever decides to not seek reelection to the House will add to the retirements we’ve already seen this year. So far, 28 House seats are going to be open in next year’s elections, meaning that there will not be an incumbent on either the primary or general election ballot. Additionally, there are four vacancies in the House right now. We’re not counting these as true open seats, because presumably new incumbents in these seats will be seeking full terms in their own right after winning forthcoming special elections.

The postwar average, according to data compiled by Vital Statistics on Congress, is for 397 House members to seek reelection each cycle. That means that, on average, there are 38 open seats per cycle. There are 28 so far, but there’s still plenty of time for this cycle’s tally to match or perhaps even exceed the postwar average.

The open seats have a decidedly Republican lean: Of the 28 open seats, more than two-thirds (20) are currently held by Republicans, while just eight are held by Democrats.

Most of these open seats will be easy holds for the incumbent party: 20 of the 28 are rated as Safe Republican or Safe Democratic.

However, eight of the open seats are competitive to at least some degree in our ratings, and all but one of those are currently held by Republicans. This gives Democrats more of an opportunity to net seats from the list of open seats, at least so far.

While the incumbency advantage historically observed for House members may be eroding, open seats still tend to be harder for the incumbent’s party to defend than if the incumbent him or herself was running. In 2018, 12 of the Democrats’ 43 pickups came in seats where the incumbent didn’t run again. So while the bulk of the Democratic pickups came by beating incumbents — they beat 30 last year, and also flipped an additional seat (SC-1) where the GOP incumbent, Mark Sanford, ran for reelection but lost his primary — Democrats won 12 of 39 GOP-held open seats. In other words, Democrats converted about 30% of their possible open-seat opportunities. Meanwhile, Democrats won about 15% of the GOP-held seats where incumbents ran again. So the Democrats’ batting average was significantly higher among the open seats than among the ones defended by Republican incumbents.

Meanwhile, Republicans did not defeat a single Democratic incumbent in 2018 — but they did flip three Democratic open seats.

This is a long way of saying that open seats are still often more vulnerable for the incumbent party than ones held by incumbents.

Let’s take a look at these districts so far by splitting them into three groups. The first group, shown in Table 1, includes the eight open seats that we rate as at least somewhat competitive. The second features the 20 open seats where, realistically, the only competition will be in the primary. The third group features the four vacant seats, where there will be special elections later this cycle.

The seat that stands out here is TX-23, which runs from the outskirts of El Paso to the San Antonio area and has been competitive throughout the decade. Rep. Will Hurd (R) is retiring after three terms; this is just one of three districts held by Republicans that Hillary Clinton carried in the 2016 election, and it’s also the only seat in the country where we make the incumbent party an underdog. There are many candidates on both sides, but veteran Gina Ortiz Jones (D), who came within half a point of beating Hurd last year, is running again and is sitting on a $1.4 million warchest. Meanwhile, the leading GOP candidate appears to be veteran Tony Gonzales (R), who Hurd recently endorsed. He only has a little over $100,000 in the bank. Money isn’t everything, but Ortiz Jones’ big financial edge, residual name ID from her near-miss last time, and the likelihood (although not certainty) that the Democratic presidential nominee will once again carry the district combine to make the Democrats the favorite in this district.

The one Democratic-held open seat, IA-2, gives the GOP a Toss-up target in a Trump-won district. Democrats have rallied around Rita Hart, a former state senator who was the party’s lieutenant gubernatorial nominee last year, while Republicans have state Sen. Mariannette Miller-Meeks (R) and former Rep. Bobby Schilling (R), who represented IL-17 from 2011-2013. Miller-Meeks unsuccessfully challenged retiring Rep. Dave Loebsack (D, IA-2) in 2008, 2010, and 2014, coming within striking distance of him in those latter two elections, while Schilling’s old Illinois district is separated from IA-2 by the Mississippi River.

Otherwise, these open seats largely will test the GOP’s ability to defend suburban turf in places like Long Island, Dallas-Ft. Worth, Houston, and Atlanta.

All told, the Republicans would be very fortunate to avoid a net loss among the seats listed here. But there’s always the possibility that future retirements could endanger Democratic seats and change the overall calculus. For instance, Rep. Collin Peterson (D, MN-7) holds a seat Trump won by 31 points and often flirts with retirement. If he retired, his district would move from a Toss-up to an easy Republican pickup. 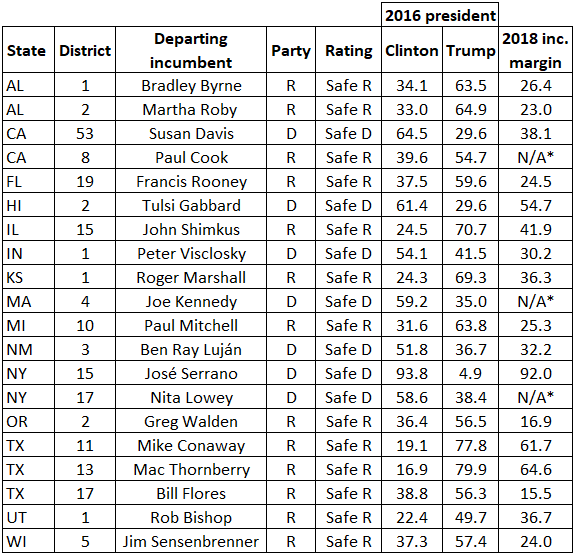 Notes: * N/A means that the district did not feature two-party competition in 2018; Cook faced a fellow Republican in the general election, while Kennedy and Lowey did not face Republican opponents.

Table 2 shows the open seats rated as safe. This group includes a mix of long-serving members on both sides — although there are clearly more Republicans heading for the exits than Democrats — as well as some more recently-elected members who are seeking greener pastures: Reps. Bradley Byrne (R, AL-1), Joe Kennedy (D, MA-4), Roger Marshall (R, KS-1), and Ben Ray Luján (D, NM-3) are seeking Senate seats, and Rep. Paul Cook (R, CA-8) is running for a county supervisor position, which may actually be a greener pasture depending on one’s perspective (there have been a handful of other sitting U.S. House members from California who have attempted to make such a switch in recent years). Rep. Tulsi Gabbard (D, HI-2) is pursuing, rather quixotically, the Democratic presidential nomination.

Some of these seats could hypothetically be competitive in really bad political environments for the incumbent party. For instance, retiring Rep. Peter Visclosky’s (D, IN-1) post-industrial northwest Indiana district fell from voting for Barack Obama by 24 points in 2012 to Hillary Clinton by 13 in 2016, although it should remain Democratic in 2020. If Indiana Republicans wanted to aggressively gerrymander the state after 2020 to add to their 7-2 statewide U.S. House delegation edge, though, this district might be an attractive target to break up.

Note that there are several open Republican seats in Texas, listed both in Tables 1 and 2. For newly-elected members from these seats, redistricting could scramble things next cycle as the Republicans who probably will retain line-drawing power redesign the current districts and add a few new ones to account both for the state’s exploding population growth and for the growing Democratic strength in the state.

Finally, Table 3 shows the vacant seats that will hold special elections later this cycle. Of these forthcoming special elections, only CA-25, from which Katie Hill (D) recently resigned, seems truly competitive. Gov. Gavin Newsom (D-CA) just set the all-party primary for March 3, concurrent with the state’s presidential primary. A big, Democratic-leaning first-round turnout could allow state Assemblywoman Christy Smith (D) to win the vote majority required to win the special election outright, but she may not have the Democratic field entirely to herself: Cenk Uygur, a progressive commentator, also is apparently running, but he is taking flak for past controversial comments. Former Rep. Steve Knight (R) is running to reclaim the seat he lost to Hill by nearly nine points last year, among other Republicans.

Last cycle, only Pennsylvania drew new lines, as the state’s Democratic-controlled Supreme Court threw out a Republican gerrymander and replaced it with a more balanced but arguably Democratic-leaning map. Democrats converted a 13-5 GOP delegation into one that was split 9-9, with three of those four Democratic flips coming in open seats and the fourth coming when Rep. Conor Lamb (D) beat Rep. Keith Rothfus (R) in a redrawn Pittsburgh-area seat (Lamb had won a special election under the old district lines before winning the incumbent vs. incumbent bout).

A similar situation is playing out in North Carolina, where a state court just threw out a Republican gerrymander. The state currently features a 10-3 Republican-dominated U.S. House delegation. North Carolina’s GOP-controlled state legislature passed a replacement map that likely would result in an 8-5 GOP delegation, netting Democrats two seats. It’s unclear whether this map will ultimately be adopted: It may be that the Democrats can get an even better map. Rep. George Holding (R, NC-2), whose district likely would become unwinnable for him under a new map, is already telegraphing his retirement. Rep. Mark Walker (R, NC-6) might also find himself in a Democratic district, although he may challenge a sitting GOP colleague elsewhere. In any event, the North Carolina remap may very well contribute to the open seat total, too. We will issue new ratings in North Carolina once the new map is finalized.

However, since the 2018 election, a few developments have effectively risen the bar for needed GOP gains. As noted above, Democrats seem likely to net at least a couple of seats because of the North Carolina remap. Also, Republicans are at least a small underdog in one of their current open seats — TX-23 — and Rep. Justin Amash (I, MI-3) left the party. So instead of Republicans having to win at least 18 currently-Democratic seats to win the House, the real number may be more like 21, and that doesn’t even include whatever effort they will need to exert in Amash’s seat.

Republicans do have a path to win the House, which largely goes through flipping a significant number of the 31 Trump-won districts held by Democrats. Such a result cannot be ruled out in an age where ticket-splitting is on the decline.

But so far this cycle, Democrats stand to benefit more from retirements than Republicans. Also, significant one-off events, like Amash’s defection and the North Carolina redistricting, are making life harder for the Republicans.

That’s why the Democrats continue to be favorites to hold the House of Representatives majority.