— Republicans in several states have canceled primaries and caucuses in 2020 as President Trump seeks renomination.

— To be sure, the Trump campaign and various state GOP organizations are working to smooth the president’s path to renomination and attempting to reduce any divisiveness within the Republican primary electorate and ultimately the Republican general election coalition.

— However, the cancellation of primaries and caucuses is not unprecedented, as a review of the two most recent nomination cycles involving incumbent presidents (George W. Bush in 2004 and Barack Obama in 2012) reveals.

Why primaries and caucuses get canceled

Much has been made of late about the recent wave of cancellations of Republican primaries and caucuses ahead of primary season in 2020. With three challengers having thrown their hats in the ring to oppose President Donald Trump for the Republican nomination, there have been at least a few quiet declarations about the fairness (or necessity) of such maneuvers on the state level. Fairness or necessity aside, however, these sorts of moves are not uncommon throughout the post-reform era of the presidential nomination process. States and state parties routinely hold off on conducting both primaries and caucuses for a variety of reasons: as a means not of protecting an incumbent president, but of instead saving valuable resources a state government could use for other more pressing projects, or that state parties could use elsewhere in party building.

But the question that has lingered amid all the state-level maneuvering on the Republican side is whether this 2020 cycle is any different than other cycles involving incumbent presidents seeking renomination? And beyond that consideration, are there any differences across the two major parties?

Coming on the heels of President Trump’s victory in the 2016 general election, the Republican Party did what incumbent parties occupying the White House tend to do: They largely stuck with the overarching national party delegate selection rules that got the president nominated in the first place. The only change that took place within the RNC rules was to eliminate a debates commission within the RNC charged with sanctioning presidential primary debates. And that decision was made and finalized in 2017-18 in the context of a constant drumbeat of just how vulnerable the president was to a challenge from within his own party. In other words, despite the potential for threat, the national party made no significant moves within the rules to insulate the president from those possible challenges.

While that may be viewed in retrospect as a missed opportunity, in a typical four-year presidential nomination cycle, it often is not the only opportunity for a party to exercise some control over the process. Instead of working through the national party rules to end the proportional allocation requirement for early calendar contests, for example, the national party and the presidential reelection campaign can work with state parties to change rules at that level. That is exactly what the Trump campaign set out to do in early 2019. Changes have been made to increase delegate qualification thresholds (see Michigan), to add winner-take-all triggers (see Massachusetts), to end the direct election of delegates (see West Virginia), and to cancel primaries and caucuses. All had some variation of the same goal: to smooth the president’s path to renomination and attempt to reduce any divisiveness within the Republican primary electorate and ultimately the Republican general election coalition.

Obviously, primary rules changes have a clearer, more direct impact on the former, but parties tend not to forget the latter. That is why one sees parties trying to get back to the White House make changes to their rules. But that does not mean that the party in the White House sits idly by waiting for the general election. Much of what guides the two major parties in the United States on these questions is based on the general philosophies of both. The Democratic National Committee has increasingly taken a more top-down approach to rules and rules changes, defining, for example, when states can hold delegate selection events, the method of delegate allocation, and any threshold to qualify for delegates. National Republicans, on the other hand, have tended to take a more hands-off approach. This has changed some in recent cycles, but the RNC has for most of the post-reform era left it up to the state parties to decide how to handle their own delegate selection processes.

That philosophical difference has implications for how both parties tackle rules changes in a cycle when they are defending the incumbent in the White House. In the wake of the 2008 election, Democrats still reexamined their rules based on the Democratic Change Commission chartered at the 2008 convention in Denver. There was an effort to reduce the number of superdelegates that came out of that commission and a new bonus incentivizing states to form regional and subregional clusters of contests on the primary calendar. That all happened at the national party level, and states responded by making very limited changes to their delegate selection plans for 2012.

Alternatively, the Republican process — the Republican philosophy — empowers state parties. That is not to say that the national party did not make any changes, but it is noteworthy that in cycles prior to 2012, the Republican National Committee could not make changes to the national party rules unless they came out of the quadrennial convention. To the extent, then, that changes were made to the rules, in incumbent cycles or not, they tended to come from the state parties. Cancellations, as a result, have been state party decisions often focused on a financial bottom line rather than out of some perceived need to come to the aid of a potentially embattled Republican president.

But those past cancellations, and those occurring on the Republican side for 2020 come in a variety of forms, something that has been lost in the coverage of the recent spate of Republican state party decisions. The focus there — or perhaps the frame — has been on state parties opting out of primaries or caucuses. There is, however, more nuance to this than mere opt outs. Table 1 demonstrates this by filtering these state-level cancellation decisions into more refined categories. Sure, Republican state parties in five states in 2019 have exercised opt outs. And another, Arizona, did the same, but only after the state legislature created that power through their budget negotiations during the 2019 legislative session. 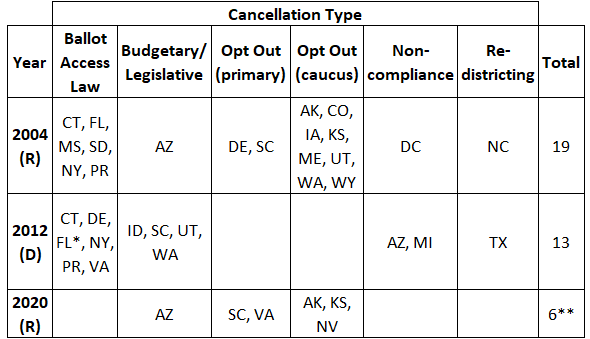 Notes: *Florida had not only a law in place to cancel the primary if only one candidate was on the ballot, but also had a noncompliant January primary, forcing Sunshine State Democrats to use a later caucus instead.

**The 2020 total remains in flux as Republican state parties continue to finalize their 2020 rules ahead of an Oct. 1 RNC deadline.

Ballot Access Law: States with laws in statute to cancel primaries if just one candidate makes the primary ballot.

Budgetary/Legislative: State legislatures either decided not to fund a presidential primary or outright canceled the primary.

Opt Out (primary): State party opts out of a primary election.

Opt Out (caucus): State party opts out of a caucus and/or holds no presidential preference vote.

Noncompliance: States with a primary noncompliant under national party rules on timing (too early).

Redistricting: States with ongoing redistricting battles that kept the delegate selection process unresolved, forcing states to use a caucus.

Over the years, state parties have also made the decision to opt out of a primary because the timing of the contest was noncompliant under national party rules. Take Arizona, Florida, and Michigan in 2012. Democrats in those states did not willingly opt out of those primaries. Instead, Republican state legislators made decisions to schedule those primaries early to impact the course of the Republican nomination race. That left Democrats in those states in the lurch. The Democratic state parties could apply for waivers from the DNC Rules and Bylaws Committee, but given the Florida and Michigan kerfuffle from the 2008 cycle — when those states scheduled their nominating contests earlier than national Democrats allowed — those waivers may not have been forthcoming. Given the choice, Democrats in all three states chose later calendar caucuses in lieu of a primary that would have penalized them absent a waiver.

Lingering redistricting concerns can also derail a primary. Unresolved congressional district boundaries affects the allocation of congressional district delegates in both parties. Both Texas in 2012 and North Carolina in 2004 had unsettled redistricting processes stretching into the presidential election year that forced state parties into alternate means of delegate allocation.

Finally, one large collection of states contributing to this cancellation trend in years in which an incumbent is seeking renomination is based on state law. In a number of states, there are laws on the books that automatically cancel a primary election if only one candidate appears on the ballot. That was a significant contributor to the total number of cancellations in both of the 21st century cycles when an incumbent was seeking renomination. They accounted for a third of the cancellations on the Republican side in 2004 and almost half of them in the Democratic process in 2012. This is an area that may bump up the total number of 2020 Republican cancellations after the Oct. 1 RNC deadline as Trump’s challengers attempt to make the ballot in those states. Should Mark Sanford, Joe Walsh, and Bill Weld fall short of making the ballot, then Trump being the sole qualifier may automatically end Republican primaries in a number of states.

The one thing that stands out in the comparison between parties is the number of opt outs during this century. It is much more prevalent among Republicans, especially in caucus states. Note that in 2004, when George W. Bush was up for renomination, eight state parties held caucuses but had no presidential preference vote tethered to the process. Delegates were selected in that caucus/convention process, but those delegates were either bound to only Bush or remained unbound but committed to the president. Another avenue for Republican state parties in this vein is that under Rule 16(d)(1)(iii) of the Rules of the Republican Party, state committees can select, allocate, and bind delegates to the national convention. In fact, this is what Nevada Republicans have done for 2020. This is not as clearly an option on the Democratic side under DNC rules. That also helps to explain some of the differences across parties. It also suggests that there is room for growth in the number of caucus cancellations on the Republican side as the deadline for state parties to finalize plans for 2020 approaches.