— Among states that are finished voting this year, 5 chose candidates of different parties between their Senate and gubernatorial elections. This number is roughly in line with recent midterms.

— Georgia is headed to a runoff, but Sen. Raphael Warnock (D-GA) and Brian Kemp (R-GA) placed first in their respective races this month.

— Arizona came close to splitting its ticket, but ultimately voted for 2 Democrats. There were a few other states where there was a significant delta between the Senate and gubernatorial races.

2022 Ticket-splitting: In line with recent history

In late August, as the election season was heading into its final stretch, the Crystal Ball surveyed the landscape and identified several states that seemed likely to split their tickets in this month’s election — defined here as voting for one party for Senate and the other party for governor. Although the trend of split-ticket voting has generally fallen off in the last decade or so, a few promising prospects emerged among the 25 states holding elections for both Senate and governor.

The 2 most recent midterms, 2014 and 2018, each saw 6 split-ticket states. With most everything counted, 2022 fits that historical pattern exactly… sort of. Nevada, New Hampshire, and Vermont all sent Democrats to the Senate while electing Republican governors. Kansas and Wisconsin, meanwhile, reelected their Republican senators alongside their Democratic governors.

Ok, so that’s 5 states — wouldn’t we need 6 for 2022 to match the previous couple of midterms? For now, we are putting Georgia in the “sort of” category. Though the race for Senate is going to a runoff next week, which we will likely have more to say on later, Sen. Raphael Warnock (D) finished ahead of his Republican opponent, former football player Herschel Walker. Gov. Brian Kemp (R), though, was reelected comfortably. So we’ll include Georgia in the crossover category for now as we wait and see what happens next week.

With that, we’ll take a closer look at the half dozen states that split their tickets between this year’s Senate and gubernatorial races.

In August, we identified Vermont as the state most likely to split its ticket this year, and that was certainly the case: there was an 87 percentage point gap between the results of its 2 biggest races. In the open-seat contest for Senate, Rep. Peter Welch (D, VT-AL) won his bid for a promotion by just over 40 points — Welch will become only the second Democrat Vermont has ever sent to the Senate. The first was retiring Sen. Patrick Leahy (fellow Sen. Bernie Sanders caucuses with Democrats but was elected as an independent). Meanwhile, popular moderate Republican Gov. Phil Scott won a fourth term by 47 points. Map 1 gives a town-level breakdown of Vermont and New Hampshire’s (the other ticket-splitting New England state) vote. In 2020, Scott had a similarly comfortable 68%-27% win, and he carried all but a few towns — this year, Scott took everything. 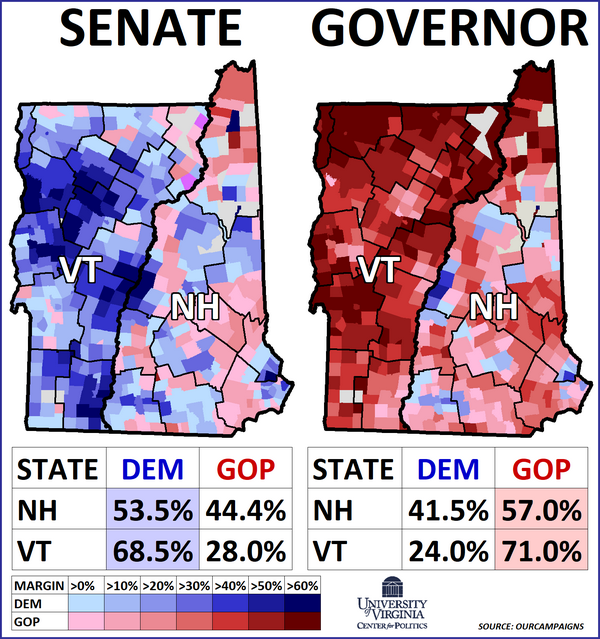 One state over, several late pre-election polls suggested that an upset was brewing in the Granite State, but Democratic Sen. Maggie Hassan defeated her Trump-aligned challenger, veteran Don Bolduc (R), by 9 points. In fact, Hassan’s margin represented a slight improvement on Joe Biden’s 53%-46% showing. On Election Night, Hassan’s strength was an early sign that Democrats would beat expectations. Gov. Chris Sununu’s (R-NH) result was down from the lopsided 65%-33% he scored in 2020, but he won by a still-decisive 15 points.

As with other places around the map, there were ample signs of realignment in New Hampshire. Bedford, which sits just west of Manchester, was one of Mitt Romney’s best towns in 2012 — it is also one of the most college-educated towns in the state. Hassan carried Bedford by 4 points while Sununu did a little better than Romney’s 62% there — although, keep in mind that Sununu won the state by 15 while Romney lost it by 6. Both Sununu and Hassan’s wins have some historical significance: Sununu is a rare 4-term governor and next year will mark the first time in the popular vote era that 2 non-freshmen Democrats will represent New Hampshire in the Senate.

In Wisconsin, as in New Hampshire, voters favored incumbents, although its results were both considerably closer. The Crystal Ball rated the Senate in Wisconsin as Leans Republican all cycle — Sen. Ron Johnson (R) held on, but only by 1 percentage point. Marquette University Law School pollster Charles Franklin has several maps breaking down the result. Compared to 2016, when he won by 3 points, Johnson’s margins dropped in most of the state’s more populous counties — on Franklin’s map, a string of counties running up from Racine north to Green Bay is obvious. But Johnson made double-digit gains in several western and northern counties that are, by composition, rural and more elderly.

In the Wisconsin gubernatorial race, Gov. Tony Evers (D) won reelection by about 3.5 points (a comfy margin by state standards) against Republican businessman Tim Michels, who ran as a conservative populist. Michels underperformed Johnson in all 72 of the state’s counties, generally running furthest behind in the western half of the state, an area that has some lingering down-ballot tendencies — Republicans picked up the open 3rd District there, but the result was closer than expected. While educational polarization has tarnished the bellwether status of some Wisconsin counties, Door County, which juts out into Lake Michigan, has maintained a decent record in recent elections: as Johnson carried it by less than 100 votes, Evers won it 52%-48%.

After a hard-fought campaign where his side came out on the losing end, Louisiana Republican Eddie Rispone’s campaign manager lamented that, “It’s hard to ask the voters to fire someone that they approve of.” Despite Louisiana’s red hue, it reelected Gov. John Bel Edwards (D) in 2019, who usually kept positive approval ratings during his first term. That seems like it may have been the case in Kansas this year. In a Trump +15 state, Republicans reportedly had trouble finding an effective line of attack against Gov. Laura Kelly (D). As with Edwards, Kelly was initially elected to succeed an unpopular Republican administration, something she reminded voters of in her messaging. The Senate race there, which was on no one’s radar, brought better news for Republicans: GOP Sen. Jerry Moran won a third term by over 20 points, although the state’s most populous county, Johnson, flipped against him.

Despite being a fairly straight-party state in recent election cycles, Nevada reelected Sen. Catherine Cortez Masto (D) while narrowly ousting Gov. Steve Sisolak (D) — if Sen. Warnock prevails next week, Sisolak will be the only incumbent Senator or governor to lose reelection this year. In his (strikingly accurate) pre-election prediction, state political analyst Jon Ralston cited candidate quality as a guiding factor when putting together his final calls. Sisolak’s opponent, Clark County Sheriff Joe Lombardo (R), had a base in the state’s most populous county, while former state Attorney General Adam Laxalt (R), Cortez Masto’s opponent, was not as strong of a candidate. It’s also possible that Nevadans who were frustrated over the state’s COVID lockdowns took their anger out on Sisolak, who was responsible for managing the state’s pandemic response efforts. As state mapper Alex Diaz shows, in Clark County — which cast about two-thirds of the state’s votes — Sisolak ran slightly behind Cortez Masto in almost every precinct.

Finally, we’ll tentatively include Georgia in our list of split-ticket states. While Gov. Brian Kemp won his race outright, taking just over 53%, Sen. Raphael Warnock finished at 49.5%, which was 1 point better than Republican Herschel Walker. One area to watch in next week will be the often-discussed suburbs around Atlanta. The state’s redrawn 6th district was new for this cycle and was meant to take in some of the region’s redder suburban communities. As state mapper Jonathan Casas illustrates, keeping the GOP margins down in places like this will be key for Warnock. Walker carried the district by 14 points, but Kemp doubled that margin. 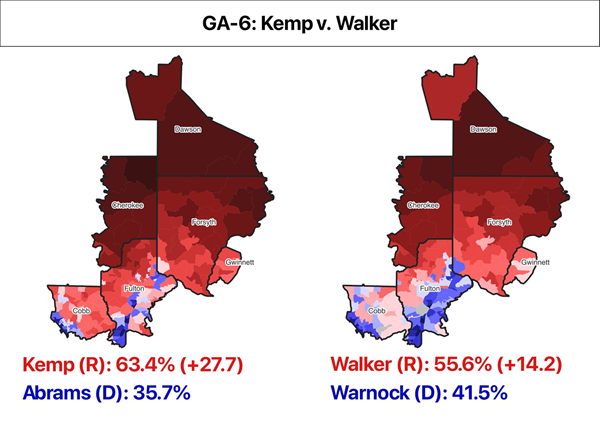 Aside from those 6 states, Arizona was the state that came closest to offering a split verdict. Democratic Sen. Mark Kelly’s comfortable 51%-46% win over Republican Blake Masters likely helped Secretary of State Katie Hobbs (D) prevail in the gubernatorial race — public polling pointed to a close race, though Hobbs generally trailed in averages. It may also be worth mentioning that, as a sitting statewide official, Hobbs had strengths of her own, and she faced an election-denying opponent in Republican Kari Lake (true to form, as the state is working to certify its results, Lake is contesting the outcome). In any case, Kelly was the first Democratic Senator that Arizona has reelected since 1988 and Hobbs will become the state’s fifth woman governor.

Several other states saw double-digit gaps between the percentage margins of their top-of-ticket contests but still voted straight party.

For much of this cycle, Republicans were excited about the possibility of winning Oregon’s governorship for the first time in 40 years. Instead, the 2022 contest turned out to be the latest in a line of competitive Democratic victories, as partisans seemed to come home to former state House Speaker Tina Kotek during the final stretch of the election. Kotek won by 3.5 points — close, but not exactly a squeaker — while veteran Sen. Ron Wyden (D-OR) secured a fifth term by a 56%-41% spread.

New York, as we’ve pointed out in some of our post-election analysis, was one of the weak spots for Democrats this year. Gov. Kathy Hochul (D-NY) held off a spirited challenge from Rep. Lee Zeldin (R, NY-1) but her less-than 6-point victory was hardly anything to write home about. Indeed, Zeldin’s showing was the best for a Republican in an Empire State gubernatorial race since the days of former Gov. George Pataki (R-NY) — as an aside, Zeldin, who earned considerable goodwill from his party during his uphill run, is considering a bid to lead the Republican National Committee (although that may also be an uphill contest for him). Perhaps a more embarrassing result for New York Democrats was Senate Majority Leader Chuck Schumer’s showing. Schumer ran about 7 points better than Hochul but his 56% was undeniably weak, especially considering he cleared 70% in 2016.

As expected, the Ohio Senate race was closer than it probably should have been, but Republican author and venture capitalist J. D. Vance beat Rep. Tim Ryan (D, OH-13) by a 53%-47% vote. In what was one of the clearest signs of the realignment, Vance carried Ryan’s homebase Mahoning County (Youngstown) by 3.5 points. After the county gave Barack Obama over 60% both times he ran, Donald Trump came close to carrying it in 2016, then won it by 2 points 2020. Meanwhile, suburban Delaware County, which sits in Columbus’s orbit and never gave Obama more than 40% of the vote, matched the statewide vote almost perfectly. In the gubernatorial race, Gov. Mike DeWine (R-OH) was reelected by a 63%-37% margin — every Republican running for lower statewide office in Ohio won by double-digit margins.

So even in an era of more nationalized elections and greater straight-ticket voting, voters are still clearly splitting their tickets in a number of key races — sometimes, dramatically so.