Skip to content
Home
/
No, the Big Lie Hasn’t Gone Away

— An analysis of 552 Republican candidates running for Senate, House of Representatives, governor, secretary of state, and attorney general in the 2022 elections shows that close to half (221 candidates) who made statements on a spectrum from those who accepted the 2020 election outcome with reservations to those who fully denied the results won in 2022.

— While the good news is that surveys show the majority of Americans are confident their votes will be accurately cast and counted, confidence is at historic lows and there is a partisan divide.

— The extent to which unfounded claims of election fraud have become integrated into campaigns and used as a tools for fundraising efforts are particularly corrosive to democratic institutions when they translate into attempts to reshape voting laws that create divergent access and rights, and contribute to rising violent threats against election workers.

How election deniers performed in 2022

Election denial has spread and continues to undermine faith in American election systems. This isn’t good for our democracy. But don’t just take our word for it. The International Election Observation Mission of the Organization for Security and Co-operation in Europe pointed out in its November 2022 report “noted efforts to undermine voters’ trust in the electoral process by baselessly questioning its integrity can result in systemic challenges.”

Some headlines have proclaimed that election denial wasn’t a winning strategy in 2022. That likely was the case in some key races in competitive states and districts. But it was hardly fatal in many other contests considering the sheer number of elected leaders who currently are or will be serving in office and have denied, disputed, or raised questions about election results. These hundreds of elected leaders now have bigger platforms to communicate with constituencies and continue to spread misinformation or attempt to sow seeds of doubt to prime voters to reject future election results. We already witnessed examples of this in the certification process in a couple of key states. In Cochise County, Arizona and Luzerne County, Pennsylvania, local Republican election officials refused to meet their states’ deadlines to certify election results in the face of constituents who showed up to public meetings with falsehoods or misguided information.

While candidates who made the most outrageous statements, like Doug Mastriano in Pennsylvania and Kari Lake in Arizona, garnered significant attention, the 2022 elections included a much bigger pool of candidates and elected officials. We wanted a more nuanced understanding of the outcomes and what it may mean for the future. So, we analyzed a database of 552 Republican candidates running for Senate, House of Representatives, governor, secretary of state, and attorney general in the 2022 elections. Here’s what we found:

— 77 Republican candidates we analyzed stated that they fully accept the 2020 election results. Of those, 43 were elected in 2022. All but 4 of the 43 were incumbents for office and in contests that the Crystal Ball rated as Safe Republican or Likely Republican. The 4 exceptions were Jim Pillen, who won in the open Nebraska gubernatorial race, which the Crystal Ball rated as Safe Republican; and Laurel Lee won in the open FL-15 race, rated as Likely Republican. The other 2 contests were in very competitive House races (defined throughout as Leaning to one party or the other) in New York, where Republicans Anthony D’Esposito won in NY-4 and Mike Lawler won in NY-17.

— 368 candidates have made statements on a spectrum from those who accepted the 2020 election outcome with reservations to those who fully denied the results, plus those who apparently avoided answering questions about it. Our analysis indicates that (as of this writing) 221 of these candidates won their election bid and 179 of them were incumbents. Of the 221 candidates who won, the Crystal Ball rated 192 of the contests as Safe Republican or Likely Republican, and 13 of them as Leans Republican. 16 candidates of the 221 were candidates for non-gubernatorial state offices that the Crystal Ball didn’t rate.

Table 1: Total number of Republican candidates in analysis by office, win or loss, and stance on 2020 election 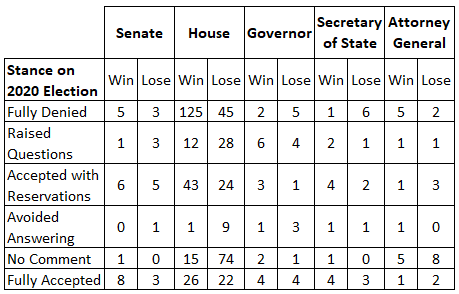 About 200 (199) candidates running in 2022 fully denied the results of the 2020 election, and 138 of them won in 2022. Where did they run for office and where did they win? The answer to these questions follows and to us paints a picture of election denial used as a means to appeal to a party base and sow division.

Seven contests were rated Leans Democratic by the Crystal Ball (AK-at-Large, CO-7, Michigan governor, Nevada Senate, NV-4, NH-1, and OH-9). None of the candidates who have fully denied the election running in a Leans Democratic race won.

Abraham Hamadeh (Arizona Attorney General) is currently slightly behind in his race as it goes to a recount. On Nov. 22, Hamadeh joined the Republican National Committee in filing a lawsuit against Kris Mayes, the Democratic attorney general candidate, Arizona Secretary of State (and Gov.-elect) Katie Hobbs (D), and 15 county recorders and boards of supervisors challenging the results of the 2022 election for Arizona attorney general. On Nov. 29, a judge dismissed the legal challenge, finding that it “is premature under the election contest statute” given that “the canvass and declaration of results for the November 2022 election have not occurred.” However, the judge left open the possibility that Hamadeh can file a new “election contest after the canvass and declaration of election results have occurred.”

The database included 92 candidates who accepted the 2020 election with reservations. Results in this category tell us more about incumbency than anything else, and perhaps a story of candidates making statements to hedge their bets in competitive races.

Eleven contests with candidates in this category were highly competitive (leaning one way or the other). Just 3 candidates who accepted with reservations won in competitive races (North Carolina Senate, NY-22, and VA-2).

Four who won in this category were races that the Crystal Ball doesn’t rate — Secretary of State in Idaho, Indiana and North Dakota, and the Attorney General race in Alabama.

Eighteen candidates intentionally avoided answering questions about their position on the 2020 election. Among them, 4 candidates won in 2022, most notably Florida Gov. Ron DeSantis (rated Safe Republican). The others were Rep. Chuck Edwards (NC-11), Arkansas Secretary of State John Thurston, and North Dakota Attorney General Drew Wrigley, all of whom were in Safe Republican races (Edwards beat lightning rod first-term Rep. Madison Cawthorn in a primary). Among the 14 candidates who did not win, only 3 candidates were running in competitive districts that the Crystal Ball rated as Leans Democratic (OR-4, NY-18, and the New Mexico gubernatorial election); the remainder of candidates (9) were running in Safe or Likely Democratic districts. One is a state race that the CB doesn’t rate (Massachusetts Secretary of State).

This final category of Republican candidates includes 107 candidates who didn’t make a comment on the 2020 election that we could find. We still wanted to know what happened in the elections with these candidates.

The remaining races where Republicans didn’t make a comment were rated Safe Democratic by Crystal Ball.

Notes: *Chuck Gray in Wyoming ran unopposed. **Alan Wilson in South Carolina ran unopposed. The amount raised by Chris Mann, the Democratic candidate in Kansas, could not be found.

It’s also worth noting that some candidates who did not make a statement denying the results of the 2020 election may have also accepted money from sources tied the Stop the Steal movement. For example, New Mexico gubernatorial candidate Mark Ronchetti, who avoided answering questions, accepted cash donations from three fake electors and one other person who was accused of attempting to overturn the results of the 2020 presidential election.

The good news is that surveys show a majority of Americans are confident their votes will be accurately cast and counted. The bad news is that confidence is still at historic lows and, not surprisingly, there is a partisan divide.

Figure 5: Confidence in accuracy of elections over time by partisanship

Public concerns about election fairness, security, and safety of course need to be taken seriously. And, election administration can always be improved, from increasing voting machines to better ballot design and process management, and consistent application of voting laws, just to name a few. The bigger challenge ahead, however, is to address the continued concerted efforts by those in power (or seeking it) to use unfounded claims of voter fraud to erode public trust in elections for their own political purposes. The extent to which unfounded claims of election fraud have become integrated into campaigns and used as a tools for fundraising efforts are particularly corrosive to democratic institutions when they translate into attempts to reshape voting laws that create divergent access and rights, and contribute to rising violent threats against election workers. And while it may be a challenge endemic to one party now, that doesn’t mean the roles won’t reverse in the future.

Finally, Newton’s third law may very well apply to the politics of election denialism. For every action there is an equal and opposite reaction; for every voter mobilization, there is a counter voter mobilization. In response to the election denialism as a campaign strategy, millions of voters showed up to the polls in 2022 mobilized by the belief that democracy itself was on the ballot. This itself may reverberate into the future by setting the stage for a partisan arms race that further exacerbates conflict and tensions over claims to electoral legitimacy.