With less than two weeks to go until the Alabama Senate runoff, we’re pulling back our Leans Democratic rating in the race and going to Toss-up. We just don’t feel comfortable making anyone a favorite at this point.

The race is as stern a test of tribal partisanship as one will find, with very Republican Alabama choosing between something of a generic Democrat, former U.S. Attorney Doug Jones, and a toxic Republican, former state Chief Justice Roy Moore, who was already a weak candidate due to his disregard for the law while on the Alabama Supreme Court before he was rocked by highly credible allegations that he aggressively pursued and sexually assaulted underage girls.

Ultimately, it seems quite possible that socially conservative Alabama voters, like Republicans across the country last year when dealing with Donald Trump, will swallow hard and support a very flawed person who will nonetheless vote the way they want over a Democrat who is, importantly, pro-choice on abortion. The more we think about it, the more we’re inclined to think that in a deep red state like Alabama, partisanship may be too much for Jones to overcome.

It’s still possible, too, that Moore will finish weakly. Jones will dramatically outspend Moore down the stretch, and the Democrat already has a seven-to-one TV ad spending advantage. But Moore’s polling has rebounded since his low point, following a somewhat familiar pattern we have seen in past elections: a “shock” hits the campaign, the polls move notably in one direction for a period of time, and then the polls shift back at least to some extent as the shock subsides (i.e. the controversy recedes, whether due to new campaign developments — common to the 2016 presidential election, for example — or the electorate simply adjusts to the new reality and some wavering partisans come home). We also wonder if the growing number of sexual misconduct allegations against Democrats like Sen. Al Franken of Minnesota and Rep. John Conyers of Michigan has muddied the waters around the Moore allegations enough for Republicans to stomach backing Moore.

An uncomplicated way to look at this is to simply take the poll margins for Moore since the GOP primary runoff on Sept. 26 and then add a line that tries to best fit the points for each survey in the graph. Chart 1 lays out the shifts in the campaign polls (with a red fit line). The first allegations against Moore came out in a Nov. 9 Washington Post story (44 days after the Republican primary runoff), and Moore’s numbers immediately took a hit. But post-Thanksgiving surveys show the Republican nominee again leading, albeit not by quite the margins he seems to have enjoyed beforehand. 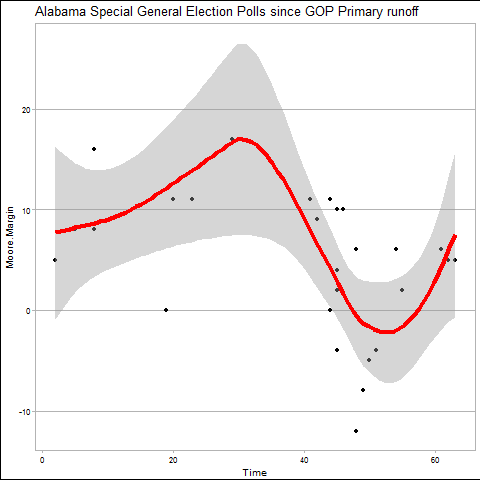 We are going to preview the Dec. 12 race more fully next Thursday, and we might revisit our Toss-up rating then if we see the contest breaking one way or the other. 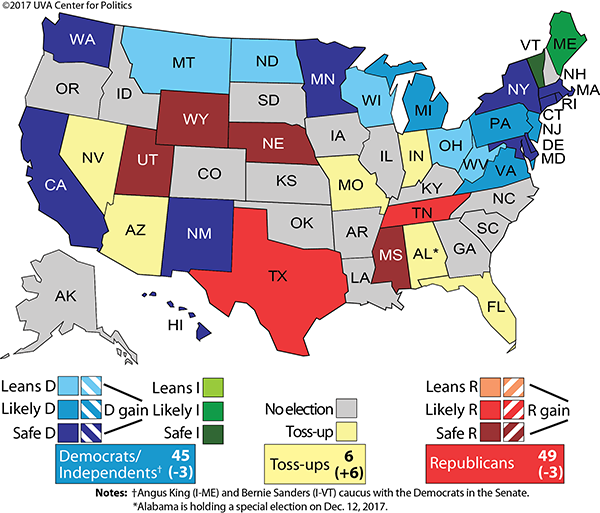