Ten years later, it is becoming increasingly clear that the national political parties have done a better job adapting to a post McCain-Feingold world than almost anyone could have predicted as both the Republican National Committee (RNC) and Democratic National Committee (DNC) have raised more funds in the last decade than they did prior to McCain-Feingold. However, passage of the McCain-Feingold law, combined with recent court decisions permitting unlimited corporate, union and individual contributions to finance independent expenditures sponsored by outside organizations such as Super PACs and 501(c) organizations, have led to a rapid proliferation of third-party groups that are having a growing impact on federal elections. These outside groups, which have flourished on both the right and the left in recent years, are increasingly engaged in political activities that were once the province of political parties, such as voter registration drives, absentee ballot programs, get-out-the-vote operations, voter identification, political advertising and issue advocacy efforts.

Perhaps the preeminent example today of such a successful third-party operation is American Crossroads, which is a Super PAC registered with the Federal Election Commission, and its sister organization, Crossroads Global Policy Strategies (“Crossroads GPS”), which is organized under Section 501(c)(4) of the Internal Revenue Code. The growing presence of the Crossroads entities across the country — at both the presidential and congressional levels — is a direct result of recent changes in the federal campaign finance laws and may be a harbinger of what lies ahead in American politics. This article describes some of the important legal developments that have benefited outside groups such as the Crossroads entities, details how the national political parties have coped with the McCain-Feingold law, and discusses the impact that the Crossroads entities have had on federal races during the two years that they have been in existence.

Before discussing the electoral impact of the Crossroads entities on the 2010 and 2012 elections, it is important to briefly define some key terms and outline the governing law in this area. The McCain-Feingold law, which took effect during the 2004 presidential election cycle, prohibits the RNC, DNC and the other national political party committees from raising or spending soft-money funds for any purpose. “Soft money” is defined as funds raised outside of the prohibitions and limitations of federal law, including corporate and labor union general treasury funds and individual contributions in excess of federal limits. Funds raised in accordance with federal law come from individuals and from federally registered PACs and are harder to raise; hence, these funds are commonly referred to as “hard money.” Prior to McCain-Feingold, the national political parties were legally permitted to accept unlimited corporate, union and individual soft-money contributions and could use these funds to help underwrite a wide variety of political and electoral activities, including voter registration efforts, absentee ballot drives, GOTV activities, slate cards and similar ticket-wide political activities. The national political parties prior to McCain-Feingold were also able to use soft-money contributions to help finance issue advertisements supporting and opposing presidential candidates. “Issue advertisements” are public communications that frequently attack or promote federal candidates and their records, but which refrain from expressly advocating the election or defeat of any candidate (which is referred to as “express advocacy”). Under federal law, the national political parties can currently accept individual contributions of up to $30,800 per year.

501(c) organizations are entities that are organized and operate under Section 501(c) of the IRC, including social welfare organizations established under Section 501(c)(4) and trade associations and business leagues organized under Section 501(c)(6). A 501(c)(4) or 501(c)(6) entity is permitted to accept unlimited corporate, union and individual contributions and may engage in partisan political activities, provided that such political activities do not become its primary purpose. By contrast, Super PACs, as political committees registered with the FEC, are by definition partisan entities and may spend all of their funds on partisan political activities. Super PACs are required to publicly disclose their donors; 501(c) organizations are generally not required to disclose their donors to the public.

As noted above, when the McCain-Feingold law was passed a decade ago, many political observers feared that national political party fundraising would be severely curtailed and that the national political parties would be marginalized in American politics. However, as Table 1 indicates below, both the RNC and the DNC have raised more funds since McCain-Feingold became law than they did prior to the soft-money ban, which first went into effect for the 2004 presidential election. During the 2000 election cycle — when it was still legal for the national political parties to raise and spend unlimited soft-money contributions — the RNC raised $316 million and the DNC raised $210 million. For the 2004 presidential election cycle, both the RNC and the DNC raised more hard-money funds than the two committees had raised in hard- and soft-money funds combined for the 2000 election cycle, with the RNC increasing its fundraising total by $14 million and the DNC increasing its receipts by $89 million. These fundraising trends largely continued during the 2008 presidential election cycle, when the RNC raised $87 million more than it had raised during the 2004 cycle, and the DNC raised $45 million more than it had raised during the 2000 cycle.

American Crossroads and Crossroads GPS combine to form one of the most potent and effective outside organizations in American politics today. In 2010, American Crossroads registered with the FEC as a Super PAC and began operations. Its sister organization, Crossroads GPS, was formed shortly thereafter as a 501(c)(4) organization.  Although the two Crossroads entities were created less than a year before the 2010 election, both entities had a major impact on the midterm election. Table 2 details the amount of funds reportedly spent by top outside groups in connection with the 2010 midterm election and indicates that the combined Crossroads entities spent the third largest amount of any outside group in the country.

Moreover, the American Crossroads Super PAC, despite not being formed until only months before the midterm election, nonetheless reportedly spent more funds in connection with the 2010 election than did any other Super PAC. Table 3 lists the top 10 Super PACs during the 2010 election cycle based upon the amount of money spent. 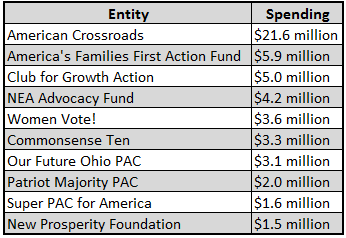 Source: Center for Responsive Politics, “2010 Outside Spending by Groups.” (Data as reported to the FEC through mid-October 2010)

In March 2011, the Crossroads entities announced a goal of raising a combined $120 million for the 2012 elections. Later that same year, Crossroads representatives stated publicly that they could end up raising $240 million or even more for this fall’s elections. Although information is necessarily limited regarding the amount of funds raised and spent by Crossroads GPS in the 2012 election cycle, press reports indicate that Crossroads GPS has announced advertising buys totaling approximately $86 million thus far this year. Assuming that Crossroads GPS has raised $86 million to cover these reported advertising buys, the two Crossroads entities have raised at least $142.8 million combined thus far during the 2012 election cycle and likely have raised much more than that, particularly Crossroads GPS which, unlike American Crossroads, is not required to file monthly disclosure reports with the FEC and is not required to publicly divulge its donors. 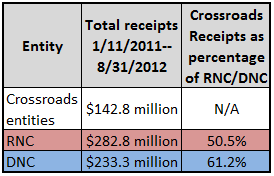 As was noted above, the national political parties have done an excellent job of adapting to the soft-money ban and have raised record amounts of money in recent election cycles. However, because outside groups do not labor under the hard-dollar fundraising restrictions that apply to the national political parties, outside groups are able to raise significant sums of money in a very short period of time. In addition, Super PACs, 501(c) organizations and other types of third-party groups are now spending more on independent expenditures and other election-related communications than are political party committees.  As is detailed in Figure 1 below, Super PACs have reportedly made $272 million in independent expenditures and other election-related communications thus far in the 2012 election cycle, whereas political parties have reportedly spent $66 million. Given the fundraising advantages that outside groups (including Super PACs) currently enjoy, this spending imbalance may become even more pronounced in the future unless the campaign finance laws are changed to allow the national political parties to raise and spend the same kinds of funds as outside groups are legally able to do.

Figure 1: Outside spending by entity type in 2012 cycle 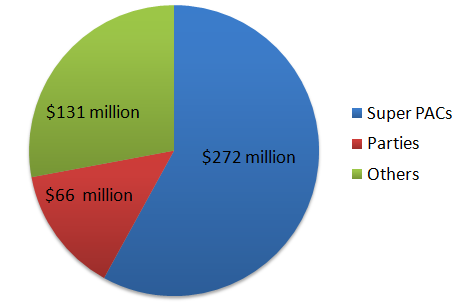 The McCain-Feingold law’s soft-money ban that applies to the national political parties, along with recent court decisions permitting unlimited contributions to outside groups to finance independent expenditures in connection with federal elections, have combined to usher in a new campaign finance era in which third-party organizations are growing in importance and effectiveness. In many ways, the American Crossroads Super PAC, along with its sister 501(c)(4) entity Crossroads GPS, are pioneers of this new political model and may be organizational vanguards for the future in American politics. There is no question that the 2012 presidential election will be the most expensive in history, but the 2012 election may also be remembered as one in which outside groups played a broader role than ever before. We likely will learn far more on this score between now and Election Day on Nov. 6.