Almost all states consistently use primaries to nominate their candidates for statewide office (U.S. Senate, governor, lower statewide elected officials), although there are some exceptions. Utah, for instance, uses a hybrid convention/runoff system, which readers will remember led to an incumbent U.S. senator, Robert Bennett (R), failing to even advance to a two-person primary in 2010. Another state, Connecticut, has a convention that helps set the primary ballot. And South Carolina Republicans recently decided against switching from a primary to a convention for next year’s races.**

Then there’s Virginia: In many contests in recent decades in both parties, nominees for statewide office have been picked at conventions without a primary depending on the preference of the party in that given election. The Old Dominion gives complete latitude to each party in choosing its nomination method every year.

The commonwealth’s curious nomination rules are in the news this week, thanks to last weekend’s Republican Party of Virginia convention in Richmond, where Republican delegates made the highly risky decision to nominate E.W. Jackson (R) for their party’s nomination for lieutenant governor. We’ll let others describe the noxious comments Jackson has made over the years; needless to say, Republican leaders in the state are privately groaning at his nomination. In addition to being next-in-line to the governor, the lieutenant governor, a separately elected position in Virginia, breaks ties in the state Senate, which is currently split 20-20 between the parties (and state Senate seats will not be up for election until 2015). Thus, the election for lieutenant governor is effectively for control of the Senate for the next two years (barring vacancies).

Unquestionably, the convention made Jackson’s nomination possible. The minister and lawyer won about 12,000 votes in 2012’s Republican Senate primary, or 4.7% of votes cast, but because of the tiny turnout at a party convention, he won far fewer votes on the convention’s final ballot than he did in his fringe run for Senate last year. Yet he’s now a statewide nominee who, if elected, would be one heartbeat from the governor’s mansion.

Jackson is far from the first problematic candidate to be selected in a Virginia nominating convention. But a reading of Virginia’s quirky nomination history shows there’s little indication that one method has led to more general election success than the other.

The primary election came to Virginia, like it did in so many states, during the Progressive Era at the start of the 20th century. Touted by Progressive leaders like Robert La Follette (R) of Wisconsin, the primary was billed as a way to empower voters and produce candidates less beholden to the party bosses who dominated nominating conventions. As adopted in Virginia, though, the primary actually helped preserve the power of the conservative Democratic machine (started by Sen. Thomas S. Martin and carried on by the more-famous Sen. Harry F. Byrd, Sr.) that ran the state, because the party conducted the primary in concert with laws that minimized the size of the electorate (poll taxes, literacy tests, etc.). Republicans — a non-factor in Virginia state-level politics until the middle of the century — continued to nominate their candidates in conventions, with the exception of 1949, when a primary experiment led to a divisive, low-turnout election that produced another losing statewide ticket. That same year, a crowded primary field resulted in an anti-Byrd Machine candidate coming perilously close to winning the Democratic gubernatorial nomination. That led to the introduction of a runoff system to protect the machine candidate from losing to an insurgent.

The runoff wasn’t used for another two decades, until 1969, when another multi-candidate Democratic battle led to a runoff between liberal-populist firebrand Henry Howell and the more moderate William Battle, son of former Byrd Machine governor John Battle. Battle narrowly prevailed in the runoff, but the divisive contest helped lead to the election of Linwood Holton, the first post-Reconstruction Republican governor in Virginia history. Holton, like nearly all Republican gubernatorial nominees before him, was nominated in a convention. Four years later, the Democrats didn’t even have a gubernatorial nominee (Howell ran as an independent), and veterans of the collapsing Byrd Machine rallied around Republican nominee Mills Godwin, who had been elected governor as a Democrat just eight years earlier. Godwin beat Howell in a very close contest. (Virginia has a unique law that prevents governors from serving consecutive, four-year terms, but governors can serve non-consecutive terms.)

In 1977, Democrats again had a divisive primary, and they lost their third straight gubernatorial contest. After seeing divisive primaries precede general election defeats in two of three elections, Democrats decided to emulate Republicans by switching to a convention. Democratic conventions selected three straight gubernatorial winners in the 1980s: Chuck Robb (1981), Gerald Baliles (1985) and Doug Wilder (1989). In that last election, Republicans decided to change up their nomination process, and they held their first primary since 1949. The nominee, J. Marshall Coleman, nearly beat Wilder.

The Republicans, having experimented again with a primary, went back to a convention in 1993, and the Democrats stuck with the convention format that year too. That year Republicans nominated a far-right candidate for lieutenant governor, Mike Farris, but Farris’s landslide defeat didn’t prevent George Allen (R) from winning the governorship or Jim Gilmore (R) from winning the attorney general’s office, both also in landslide territory.

Since 1969, Virginians have elected straight-party tickets five times but have split their tickets six times. So voters in this state are perfectly capable of making independent choices for the three top offices. We will bet the 2013 Republican gubernatorial nominee, Attorney General Ken Cuccinelli, is now reminding himself of this history.

Both parties have held nominating primaries and conventions in recent statewide elections. Charts 1 and 2, located at the bottom of this story, list the Old Dominion’s statewide nominees since 1969, and notes how they were nominated and whether or not a candidate won. Note that there’s very little difference in performance between candidates picked in primaries versus those picked in conventions. Parties generally choose a primary or convention based on each year’s unique circumstances and needs.

That’s what happened this cycle. Virginia Republicans were set to nominate their statewide ticket through a primary, and Cuccinelli and Lt. Gov. Bill Bolling (R) were preparing for what could’ve been a competitive primary — although Cuccinelli’s more conservative profile made him an obvious favorite. Yet Cuccinelli and his allies knew that a convention would assure his nomination with far less money expended, and they pushed the state party’s Cuccinelli-controlled central committee to switch to a convention. That decision caused Bolling to exit the race, but it also created an environment that led to Jackson’s nomination. (Democrats are nominating their statewide ticket in a primary this year; gubernatorial nominee Terry McAuliffe is unopposed but there are contested primaries for lieutenant governor and attorney general.)

Republican delegates in Virginia and across the nation are attracted to black conservatives like Jackson, Herman Cain and former Rep. Allen West (R-FL). In a sense, nominating a black conservative demonstrates that GOP activists oppose President Obama on the basis of ideology, not race.

Conventions can also be stampeded by a fiery speech — just think of William Jennings Bryan — and Jackson gave one at the Richmond GOP gathering.

While our history above and chart below focus on statewide executive races, the Jackson nomination is a lot like another nomination decision Republican convention delegates made in a U.S. Senate race a quarter century ago. At the 1988 GOP state convention, there was a three-way race for the Senate nomination to oppose Democrat Chuck Robb. Minister Maurice Dawkins was little-known and was not the frontrunner. But he gave a powerful speech, and Republicans loved the fact that an African-American was espousing strongly conservative views. Dawkins won the nomination in an upset, but he went on to lose to Robb by more than two-to-one.

The Jackson problem can be managed by the GOP, but they need to be sure-footed about it. There’s always the potential for disaster. It’s an unwelcome, major distraction for Cuccinelli.

The old Chinese proverb applies: Be careful what you wish for. Cuccinelli and his backers insisted on a convention; they now must live with the consequences. 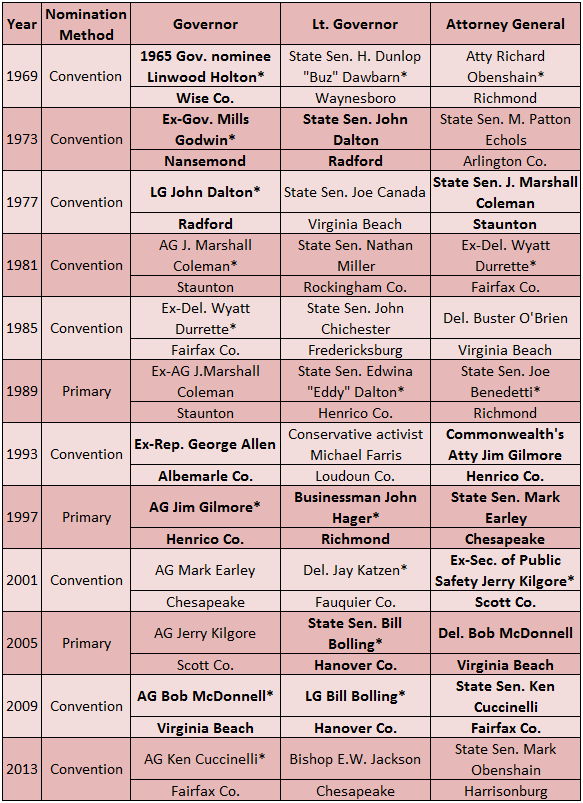 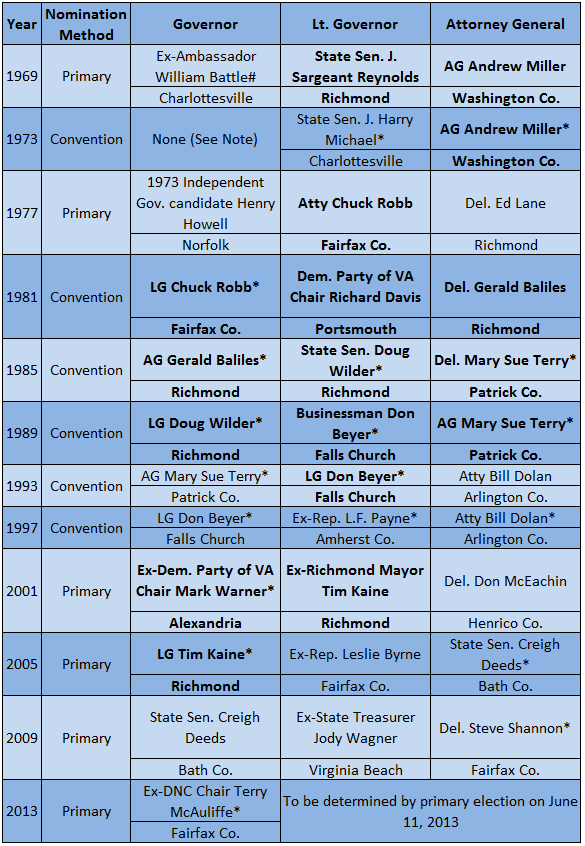 Notes: Bolded candidates won the general election. *Indicates candidate was unopposed for nomination at either the convention or in a primary race. #Battle won the 1969 gubernatorial nomination after a runoff. ^The independent city Nansemond no longer exists; it is now part of the city of Suffolk. In 1973, independent Henry Howell was the de facto Democratic nominee, though he received only a “commendation” from state Democrats and was listed on the ballot as an Independent.

**The Green Papers has an excellent state-by-state rundown of how candidates are nominated.