— With the race for NY-22 settled, 2020’s House elections may finally be fully in the rearview mirror, though IA-2’s results will be reviewed by Congress.

— Before this week, we rated two special elections in Louisiana as safe for either party; with a new vacancy in TX-6, we see an imminent special election there as Likely Republican.

— Two more districts, NM-1 and OH-11, seem likely to host special elections soon, as their incumbents have been designated for positions in the Biden administration.

2020’s final House races may be starting to wind down — more than three months after Election Day. This week started with two House elections that were, to some degree or another, unsettled. While one of those has concluded, the other is moving into what could be its final phase.

In Upstate New York, former Rep. Claudia Tenney (R, NY-22) will be heading back to Congress. After a protracted court fight, she’s won a rematch with Rep. Anthony Brindisi (D, NY-22) by 109 votes. Tenney has been a fixture in the district’s congressional politics since the 2014 cycle: that year, she ran in the primary against its incumbent Republican, the late Richard Hanna, a moderate who would go on to endorse Hillary Clinton. Hanna beat Tenney in a relatively close primary. He retired in 2016, and Tenney won the district as an open seat with a 46% plurality before losing 51%-49% in her first bout with Brindisi, in 2018.

Brindisi adopted one of the most unique pet issues of any 2020 campaign — he struck a populist tone by bashing Spectrum, though Tenney was also critical of the cable provider. But NY-22 is not a Democratic district, and, as with most House races last year, partisanship prevailed. Donald Trump carried the seat by 15% in 2016, and held it 54%-44% last November. In fact, if its voters had reelected Brindisi, NY-22 would have been the most pro-Trump district to be represented by a Democrat in the 117th Congress (that distinction instead belongs to ME-2).

While NY-22 was on a knife’s edge, 2020’s closest race was in southeastern Iowa, as Rep. Mariannette Miller-Meeks (R, IA-2) won her race by just six votes, out of about 395,000 that were cast. Miller-Meeks was seated, but her opponent, former Democratic state Sen. Rita Hart, has called on the House to investigate and overturn the result. Hart’s case seems to hinge on 22 ballots that were not counted. The body that will oversee the process, the House Administration Committee, convened on Wednesday for the first time since the new Congress was sworn in.

Like Tenney, Miller-Meeks is a well-known quantity in her area who appears to have beaten a strong Democrat. With a background in the Army, Miller-Meeks made three unsuccessful congressional runs between 2008 and 2014 before winning a state Senate seat in 2018. After giving Obama wide margins both times he was on the ballot, IA-2 backed Trump by a 4% margin in 2016, and its presidential preference barely changed in 2020. Hart has a base in Clinton County, just north of Davenport, and overperformed Biden throughout much of the district. In what proved to be the Achilles heel for her campaign, Hart ran behind Biden in Johnson County, the district’s most Democratic county, which includes the University of Iowa (Map 1). 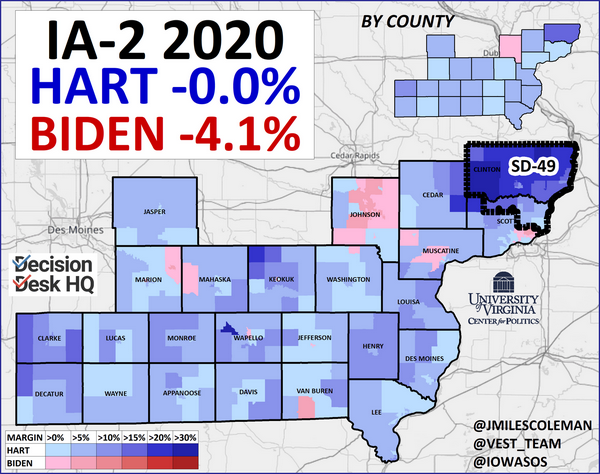 Assuming the IA-2 result holds, the final scorecard will show that the 2020 elections left Democrats with a 222-seat majority. That number is just four seats greater than the bare minimum 218 and represents a 13-seat drop from the 235 seats that the Democrats controlled after the 2018 elections.

However, since Election Day, both sides have seen vacancies, and more seats in the 117th Congress are likely to open in the coming weeks. For some Democratic members, this is simply a matter of resigning their seats to serve in Biden administration positions, while two Republican-won seats are now open for more somber reasons.

Two of the three currently vacant seats in the House are in Louisiana. Former Rep. Cedric Richmond (D, LA-2) played a prominent role in the Biden campaign, so it wasn’t surprising that he was chosen to lead the White House Office of Public Engagement, where he also serves as an advisor to the president. Richmond leaves behind the only Democratic-leaning district in the state — his LA-2 gave Gov. John Bel Edwards (D-LA) nearly 85% of the vote in 2019. While most of its population is in the New Orleans metro area, this Black-majority district follows the Mississippi River up to Baton Rouge.

The LA-2 contest has evolved into a race between two Democratic heavy-hitters who currently serve in the state Senate: Troy Carter and Karen Carter Peterson. Carter has Richmond’s endorsement, though Peterson has chaired the state party for much of the last decade and has high name recognition. Considering the district’s deep blue hue, the race has not attracted any big name Republicans.

The primary is set for March 20; with Louisiana’s jungle primary system, if a candidate of any party clears 50%, that person wins the seat. If not, the election moves to a runoff. The Crystal Ball rates the LA-2 special election as Safe Democratic, though without Richmond, Democrats may lose their advantage in the next Congressional Baseball Game.

North Louisiana’s geographically vast 5th District will also hold a special primary on March 20. Last year, Republican Luke Letlow, who served as the outgoing Rep. Ralph Abraham’s (R, LA-5) chief of staff, won a runoff to succeed his former boss. In his early 40s, Letlow seemed to have a long congressional career ahead of him, but he tragically died of COVID-19 complications days before taking office. A few weeks later, Letlow’s widow, Julia, announced plans to run for the seat.

Though about a dozen candidates have filed, Letlow looks well-positioned, and may even win outright. Her late husband won his December 2020 runoff in a landslide, in part because he was a ubiquitous presence in the district over the past several years. As a candidate herself, Letlow has support from House Minority Whip Steve Scalise (R, LA-1), the state’s most powerful member of Congress. This is a Safe Republican contest.

If elected, Letlow’s path to Congress would not be an unfamiliar one to the women who have served in the Louisiana delegation: only two have ever represented the state in the House, and both succeeded their deceased husbands.

The late Rep. Catherine Small Long (D, LA-8) won a 1985 special election to replace her husband, Gillis (who was the famous Kingfish’s nephew). Part of Long’s now-defunct LA-8 makes up the current LA-5. During the previous decade, in October 1972, then-House Majority Leader Hale Boggs (D, LA-2) vanished while he was on a plane campaigning in Alaska. His widow, Lindy Boggs, ran for the seat and became a consequential member in her own right. Boggs, who was born on a plantation and spoke with a graceful Southern accent, served for 18 years and was so popular that she kept winning the seat even after it was configured to be majority-Black.

This week’s news cycle started off on a sad note, as, going one state west, Rep. Ron Wright (R, TX-6) died of COVID-19 complications. The Texas Republican had just secured a second term representing the 6th District, south of Dallas. Multiple names have already been mentioned as potential candidates. For special elections, Texas uses Louisiana-style jungle primary rules — this could incentivize both sides to unite behind one candidate apiece, as to avoid an intra party runoff, assuming no single candidate exceeds 50% in the first round of voting.

Unlike the two Louisiana districts, TX-6 has some potential to flip, though we’re starting it off as Likely Republican. About 70% of the district’s votes come from southeastern Tarrant County — these are mostly precincts in between the cities of Arlington and Fort Worth. The TX-6 portion of Tarrant County hasn’t been immune to the suburban shifts other Texas metros have undergone: after supporting Mitt Romney 52%-46% in 2012, Biden carried that part of the district by more than 11 points last year. The remaining 30% of the district comes from Ellis and Navarro counties, to the south, which collectively give Republicans more than 2/3 of the vote. Put the three counties together, and the result is a 51%-48% Trump district (Map 2). 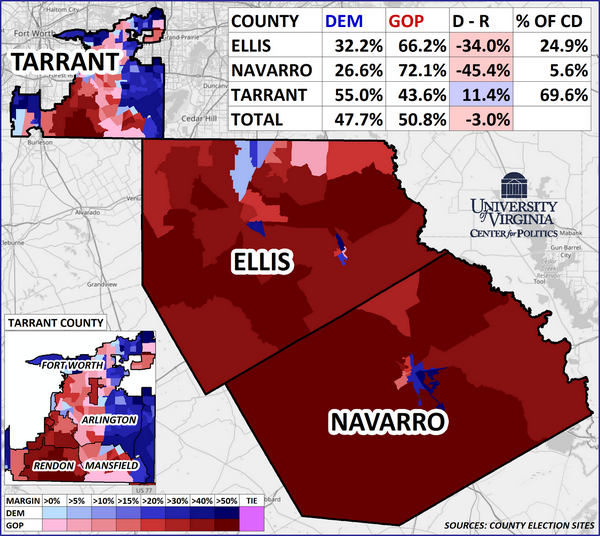 For his elections, Wright got the typical Republican numbers out of the Ellis and Navarro pair, but he was more competitive in Tarrant County, keeping his loss there within 5% in 2020.

In any case, while no special election date has been set, May 1 has emerged as a logical date for the primary, as some Texas municipal elections were already scheduled to be held then.

Imminent openings in the House, Shelby retires in the Senate

Last week, Biden’s nominee to lead the Department of Housing and Urban Affairs, Rep. Marcia Fudge (D, OH-11), got out of committee on a bipartisan vote. If Fudge is confirmed by the full Senate, she’ll leave behind a safely Democratic district in the Cleveland area. The Democratic primary to replace Fudge could be crowded, though progressives are lining up behind former state Sen. Nina Turner, who co-chaired Sen. Bernie Sanders’ 2020 campaign.

Biden’s selection of Rep. Deb Haaland (D, NM-1), a member of the Laguna Pueblo tribe, to serve as Secretary of the Interior was a choice that carried historic significance, though her nomination is running into some GOP opposition. Still, if Haaland is ultimately confirmed by the Democratic Senate, her successor in the House will probably share her party label. The Albuquerque-area NM-1 is the most Democratic district in the state, as it gave Biden over 60% last year.

If a special election is triggered, parties would select nominees at conventions. Special elections, even in districts like this, can be volatile, though we’d probably start NM-1 as Likely Democratic. Something that could cost the GOP votes is the candidacy of Aubrey Dunn: the former state Commissioner of Public Lands switched from Republican to Libertarian while in his last office (in doing so, he became the Libertarian Party’s first ever statewide officeholder). He now plans to run as an independent for the seat.

Finally, another party-switcher who made news this week was Sen. Richard Shelby (R-AL), who will be retiring. Elected as a conservative Democrat to the upper chamber in 1986, Shelby switched to the GOP immediately after the 1994 Republican Revolution. One of Congress’ last old-school appropriators, Shelby continued to show some independence — his refusal to endorse then-candidate Roy Moore in 2017 likely helped tip the special election that year to Democrat Doug Jones. But last year’s regularly scheduled election was a different story entirely: as the incumbent running against a Republican with less baggage, Jones lost 60%-40%.

With that in mind, we’re keeping Alabama as Safe Republican in our 2022 Senate ratings.