Skip to content
Home
/
Can Democrats Win Back the White Working Class?

— One of the defining features of American politics is the realignment of white, college-educated voters toward Democrats and that of white voters without a degree toward Republicans.

— There are competing views on how or whether Democrats can perform better among white non-college voters.

— Appealing to the economic interests of white non-college voters may not be enough for Democrats to win back their support.

What is driving the realignment among white voters

The past 30 years have witnessed a dramatic inversion of the class foundations of the American party system. White voters without college degrees, once the cornerstone of the Democratic electoral coalition, have swung sharply toward the Republican Party. Meanwhile, college-educated white voters, once a solidly Republican voting bloc, have been shifting toward the Democrats. The result is a party system in which, among white voters at least, education has become one of the main dividing lines.

Growing support among white working class (non-college) voters for the Republican Party has sparked a debate among political analysts and Democratic strategists about the underlying causes of Democratic decline within this shrinking but still very important voting bloc and what, if anything, party leaders can do to regain some of the lost ground.

There appear to be two major explanations for the political realignment of the white working class, and they have different implications for Democrats’ chances of a political comeback with this group. One school of thought, perhaps best represented by progressive scholar Ruy Teixeira, blames Democratic decline largely on the party’s prioritization of cultural and racial justice issues over traditional bread-and-butter economic issues. According to this theory, Democrats have failed to address economic problems such as the decline of manufacturing jobs and unfair trade competition that have led to growing economic insecurity among white working class voters. At the same time, many of these voters have been turned off by the Democrats’ increasingly liberal positions on issues such as gay rights, affirmative action, and immigration.

A second school of thought, represented by scholars such as Michael Tesler of the University of California, Irvine and John Sides of Vanderbilt University, argues that economic discontent has little to do with the flight of white working class voters from the Democrats. In their view, the main factor behind the shifting party allegiance of these voters is the success of Republican leaders like Donald Trump in appealing to the racial resentments and grievances of non-college white voters.

These two schools of thought have different implications for the ability of Democratic candidates to win back support from white working class voters. If economic discontent is the main driver of the shift to the GOP, Democrats could potentially win a larger share of the white working class vote by emphasizing concrete actions and policies to address these concerns while perhaps playing down liberal positions on cultural and racial issues. On the other hand, if racial resentment and grievances are the main drivers of white working class flight from the Democrats, paying more attention to the economic concerns of these voters might not be very effective. Moreover, downplaying or abandoning liberal positions on cultural and racial issues would potentially risk alienating voting blocs that make up key components of the party’s current electoral coalition including Blacks, Latinos, and college-educated whites.

In this article, I use evidence from the 2020 American National Election Study to examine the effects of various political attitudes on the candidate preferences of college and non-college white voters in the 2020 presidential election. In line with the arguments of racial resentment theorists, I find that economic insecurity had very little impact on white voter decision-making in 2020. However, I find that the rejection of the Democratic Party by white working class voters goes beyond racial resentment alone. Instead, I find that support for Donald Trump among white working class voters reflected conservative views across a wide range of policy issues including social welfare issues, cultural issues, racial justice issues, gun control, immigration, and climate change. In other words, the rejection of the Democratic Party by white working class voters is fundamentally ideological. This fact makes it very unlikely that Democrats will be able to win back large numbers of white working class voters by appealing to their economic self-interest. 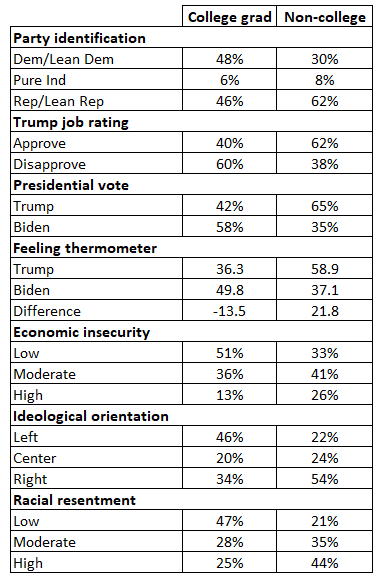 The data in Table 1 show that non-college whites rated Donald Trump much more positively than Joe Biden on a feeling thermometer scale ranging from 0 to 100 degrees and overwhelmingly approved of Trump’s handling of the presidency. White college graduates did not feel very warmly toward Joe Biden, giving him an average rating just under the neutral point of 50 degrees, but still rated the Democratic challenger much more positively than the incumbent, whom they gave an average rating of under 40 degrees. White college graduates also disapproved of Trump’s job performance by a wide margin. Finally, non-college whites scored considerably higher on both economic insecurity and racial resentment than white college graduates.[2]

One of the most striking differences between white college and non-college voters in 2020 involves their ideological orientations. However, the left-right issues scale includes a wide range of disparate issues including traditional social welfare issues, cultural issues, immigration, racial justice issues, climate change, and gun control. This raises the question of whether the ideological divide between college and non-college white voters is based more on some types of issues than on others. In order to address this question, Table 2 displays the average scores of college and non-college white voters on 6 individual issue scales that are included in the overall left-right issues scale. These scores are measured in standard deviations above (right of center) or below (left of center) the mean score on the scale, which is set at 0.

These findings provide clear evidence that white working class voters tend to support conservative policies in every major issue domain, not just a few. They are just as conservative, if not more conservative, on traditional social welfare issues involving the size and role of government as they are on newer cultural issues such as abortion and gay rights. Most importantly, the across-the-board conservatism of white working class voters goes a long way toward explaining their current support for the Republican Party. This can be seen very clearly in Table 3, which displays the relationship between left-right ideological orientation and 2020 presidential vote while controlling for class and economic insecurity.

Table 3: Percentage of major party vote for Biden among college and non-college white voters in 2020 by economic insecurity and ideological orientation 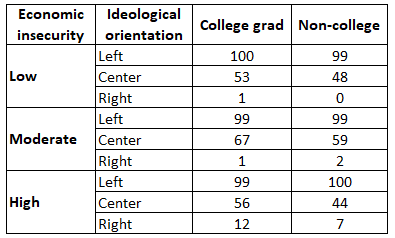 The data in Table 3 show that ideology had a powerful influence on vote choice in the 2020 presidential election. Almost all white voters located to the left of center on the ideology scale, regardless of education, voted for Biden, while almost all white voters located to the right of center, regardless of education, voted for Trump. Those in the center, just over one-fifth of white voters, favored Biden overall by a margin of 57% to 43%. However, there is little evidence that economic insecurity had any impact on the candidate preferences of even this group. Finally, it is worth noting that after controlling for ideology, there is almost no remaining difference between the candidate preferences of college and non-college whites. The class divide in candidate preference among white voters in 2020 is almost entirely explained by the fact that non-college white voters are now far more conservative across the board than are white college graduates.

Explaining the class divide on ideology

One important question raised by these findings is why non-college whites now hold much more conservative views across the board than white college graduates. In order to address this question, I conducted a regression analysis of conservative ideology among white voters. As predictors, in addition to education, I included two variables that I expected to have strong effects on ideology: party identification and racial resentment. I also included a variety of control variables including family income, sex, evangelical identification, and economic insecurity. The results are displayed in Table 4.

Table 4: Regression analysis of conservatism among white voters in 2020 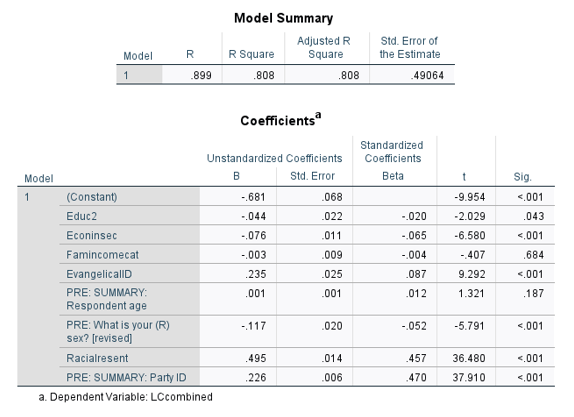 The results in Table 4 show that the regression equation explains over 80% of the variation in conservative ideology. Racial resentment and party identification are by far the strongest predictors of conservative ideology. Evangelical identification has a significant impact as well, but its effect is not nearly as strong as the effects of racial resentment and party ID. Family income has almost no effect on ideology and economic insecurity has a negative effect, which means that greater insecurity is associated with less conservative policy preferences.

These findings indicate that while ideology was by far the most important predictor of candidate preference among white voters in 2020, ideology was itself largely explained by feelings of racial resentment. Conservative policy preferences among white working class voters on a wide range of issues were closely connected to their racial attitudes and specifically to their belief that white people have been losing ground in American society because of unfair advantages enjoyed by Blacks and other nonwhite groups.

The deep political divide between college and non-college white voters in recent elections reflects a deep ideological divide between these two groups. Non-college white voters are now far more conservative than college educated white voters on a wide range of issues including cultural issues but also social welfare issues, immigration, racial justice, gun control, and climate change. This class divide appears to have little or nothing to do with economic self-interest and everything to do with the diverging racial attitudes of these two groups.

These findings indicate that efforts by Democratic leaders to win back the support of white working class voters who have been voting for Republican candidates in recent years by appealing to their economic interests or shifting to the right on issues like immigration and gay rights are unlikely to bear much fruit. Moreover, tacking to the right to win votes from a shrinking population of white working class voters might turn off large numbers of college educated white voters with liberal views on these issues.