— Partisan losses in the states losing seats may be a mixed bag collectively. But Republicans may have an edge in the states gaining seats.

Gaming out the House reapportionment

On Monday afternoon, the U.S. Census Bureau released its new apportionment numbers for the nation’s 435 House of Representatives seats. Released every 10 years, the census reapportionment adjusts the number of House seats to account for population changes.

There were some surprises. Earlier projections suggested that 10 seats would change hands. Instead, only seven seats did. Map 1 shows the seats losing and gaining seats, as well as the number of seats each state will hold in the 2020s. 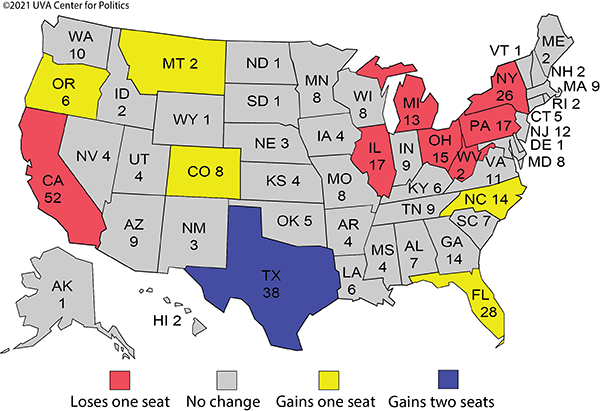 Alabama, Minnesota, and Rhode Island ended up keeping all of their seats, when previous projections suggested they would each lose one apiece. Meanwhile, Florida and Texas only added one and two seats, respectively, instead of two and three, and Arizona did not end up adding a seat.

The general trend for the past several decades has been House seat losses in the slower-growing Northeast and Midwest paired with seat gains in the South and West. That was generally reflected in this cycle’s changes, although California losing a seat gave this census a different look. California had never lost a House seat before, though it still has, by far, the biggest House delegation.

Map 2 shows the changes in the House apportionment from 1960 through the 2020 apportionment, which better illustrates the long-term Northeast/Midwest to South/West House reapportionment trend. 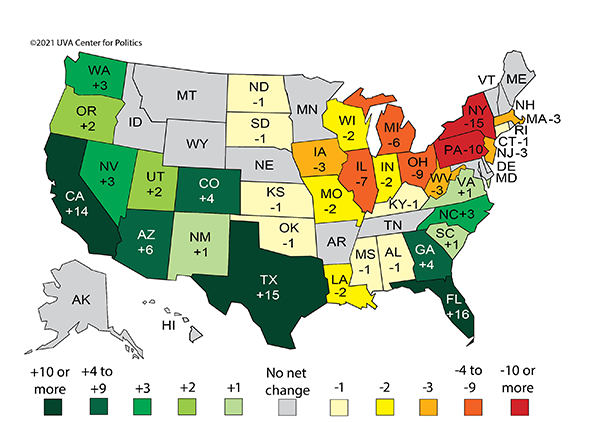 Let’s try to sort out the political ramifications of these changes. Overall, we see the Republicans benefiting from these shifts more than Democrats as we look ahead to the 2022 House elections.

Republicans likelier to come out ahead on seat swaps

Even though we know which seats will be changing hands among the states, the more granular data that states use to draw new maps will not be available until later this year. The Census Bureau’s deadline is Sept. 30, though it may produce the data earlier than that. So the actual maps are still many months away in all likelihood, and that’s not even taking into account court battles that likely will force redraws, both in this cycle and in cycles to come. A decade ago, every state with more than one House district drew new maps in advance of the 2012 election. However, court action forced district changes in at least one state in each of the 2016, 2018, and 2020 cycles.

Still, we can make some educated guesses about the partisan impact of the seat swap. We want to stress: These are just educated guesses. Redistricting often does not go the way one might expect, and the political environment next year may throw us curveballs.

For this article, we are only focusing on the seats changing hands as part of reapportionment. For instance, Illinois Democrats may eliminate a Republican seat, but they also may make changes to another Republican-held seat that causes it to flip next year. Or Florida Republicans might draw a new Republican seat and make changes to two other districts that flip from blue to red. In each of these hypothetical scenarios, we’re focusing on just the first part — the eliminated Republican seat in Illinois, and the added Republican seat in Florida — as opposed to the second part dealing with possible changes to other districts. We are going through this exercise to give readers a general sense of who calls the shots in redistricting in these states and what we might expect to happen from the seat exchange.

On balance, Republicans should benefit from these changes — not necessarily by doing better in the states losing seats, but rather by potentially picking up the lion’s share of the new seats in the states gaining districts.

West Virginia is easy. Republicans hold all three seats, so they will lose one. That makes the tally -1 R to start.

Democrats likely will be able to gerrymander Illinois and quite possibly New York. They control the redistricting process in the Land of Lincoln. In the Empire State, voters created an independent redistricting commission in 2014, but Democrats now hold supermajorities in the state legislature that could allow them to overrule the commission, and they also are pushing a November ballot issue “that would make it easier for Democrats to enact their own redistricting plan without support from Republicans,” Russell Berman of the Atlantic wrote in a helpful overview of the New York state of play. So Democrats might be able to gerrymander New York too.

Let’s assume they do and that Democrats eliminate a Republican seat in both Illinois and New York. Our running tally is now -3 R.

The situations in Michigan, Pennsylvania, and Ohio are hazy.

Republicans control the process in Ohio, but state voters imposed some restrictions on redistricting in a 2018 ballot initiative. That hypothetically could rein in partisan gerrymandering, but may not do so in practice. One natural seat to be eliminated is Rep. Tim Ryan’s (D, OH-13) Akron-to-Youngstown district, which was drawn to be a Democratic vote sink but only voted for Joe Biden by a few points as Donald Trump won over many usually-Democratic voters in eastern Ohio. Ryan’s just-announced Senate campaign doubles as an acknowledgment that he would have had a difficult path back to the House. Let’s say the lost Ohio seat is a Democratic one. That’s -1 D, -3 R.

Michigan now has a new nonpartisan commission, created by voters, while Pennsylvania has divided government. The fair thing to do here in an unclear situation is probably just to say that each party will lose a seat apiece, although the Democrats easily could lose a seat in each state: Some current Democratic districts in Detroit and Pittsburgh are losing population, so they likely will need to expand outwards, which could hurt some surrounding Democrats in competitive suburban districts.

For the first time ever, California is losing a seat. Even after a four-seat net Republican gain in the Golden State in 2020, Democrats still hold a massive 42-11 statewide edge in California, up from 34-19 in advance of the 2012 election. California uses a nonpartisan process that Democrats successfully influenced in the last redistricting cycle. We gave the Democrats the benefit of the doubt in the discussion of Michigan and Pennsylvania, so let’s give the Republicans the benefit of the doubt here. According to the website Redistricting and You, produced by the Center for Urban Research at the Graduate Center of the City University of New York, Democratic-dominated Los Angeles County includes many districts that are currently underpopulated. Perhaps one of those Democratic districts there or elsewhere gets eliminated, so let’s say Democrats lose a California district. That’s -3 D, -4 R.

So under these loose projections, Republicans lose a little more than Democrats. But that’s only half of the story: Let’s look at the states gaining seats.

We think a baseline assumption should be that Republicans will work to net all of the new seats being apportioned to Florida, North Carolina, and Texas, and they very well may be successful. If they are, the calculation here would be +4 R, +0 D. Republicans likely are disappointed that Florida only added one seat instead of two, and that Texas only added two instead of three. We were prepared to say that Republicans would have been favored to make even bigger gains in these states had they gotten those extra seats, although they may be able to otherwise gerrymander in those states to help themselves.

Republicans may achieve these ends by perhaps granting the Democrats a new seat in one part of the state but then dismantling a Democratic seat elsewhere.

For instance, Rep. Charlie Crist (D, FL-13) ran for the House in 2016 after his Tampa Bay-area seat was made more Democratic in the court-ordering Florida redistricting. Now he is apparently considering another run for governor, which likely is influenced by the possibility of his district becoming less Democratic (it is competitive as drawn).

Rep. Filemon Vela (D, TX-34) is retiring from his South Texas seat, which might make it easier for Republicans to draw a GOP-leaning seat in this usually Democratic region where Donald Trump performed quite well in 2020 relative to usual Republican performance.

But again, let’s keep a narrow focus here on just the seats lost and added.

Colorado has a nonpartisan process that is difficult to handicap, but the state’s overall trajectory is clearly Democratic. Let’s say Democrats are able to get the new seat. That’s now +4 R, +1 D.

Montana used to have two districts prior to the 1990 census, and it’s getting the seat back this time. The state has an independent redistricting commission, and if the districts look like they did under the state’s traditional split — one district covering the more populous western third of the state, and another covering the less populous eastern two-thirds — the western district would likely be competitive but Republican-leaning. Let’s assume the GOP wins the new Montana seat: +5 R, +1 D.

Finally, in Oregon, Democrats — who control the governorship and both chambers of the state legislature — recently came to an agreement with Republicans that essentially removes the Democrats’ advantage in congressional redistricting. They did this in return for Oregon Republicans agreeing to limit legislative obstruction tactics on other matters. The House map at the End of the Trail is 4-1 Democratic, but two of the Democratic-held seats are competitive, and even if Democrats had total gerrymandering power, they might have been hard-pressed to draw a secure 5-1 Democratic map. So it seems like Republicans should be able to get the new seat in Oregon: That leaves the overall tally in states gaining seats at +6 R, +1 D.

All told, this adds up to a possible 6-1 Republican edge among the new House seats being drawn. Combine that with the loss projections laid out above, and Republicans come out of this hypothetical reapportionment scenario with a net two-seat gain: They lose four seats to the Democrats’ three, but they win six of the seven new seats.

The reality of the situation almost certainly will be different than what we’ve described above. Additionally, we made a number of assumptions above that reasonable people might not agree with — others have and will make different ones, and that’s fine.

But even with different assumptions on a state-by-state basis, we think the overall takeaway is that Republicans should be able to get the better of the Democrats, on net, in reapportionment.

Every seat matters: Republicans will only need to win five seats more than the 213 they won in 2020 to flip control of the House. Reapportionment could help them, on balance, even without taking into account the broader redistricting process as well as the actual campaign season to come.