New Hampshire may just have four electoral votes, but it’s important. If you doubt it, just ask any Granite State citizens, and they’ll tell you about their first-in-the-nation primary. Even that quartet of electoral votes can matter; in 2000, if Al Gore had just won them (and without Ralph Nader on the ballot, he probably would have), Gore would have been president even without Florida. He didn’t and he wasn’t.

Since 2000, we’ve watched New Hampshire become more reliable for the Democrats in presidential years. Neighbor John Kerry of Massachusetts won 50.2% in 2004, and Barack Obama easily carried the Granite State in 2008 (54.1%) and 2012 (52.0%). And now, Hillary Clinton is doing so well that her polling lead in the state is about seven-to-eight points, depending on the average, and now we’re ready to shift New Hampshire from Leans Democratic to Likely Democratic.

We waited a while, despite favorable polls for Clinton, because it once seemed reasonable to imagine Trump making a play for the land of Live Free or Die. The state is very white (as of 2014, it had the fourth-smallest nonwhite population share), and the Crystal Ball team hypothesized in 2015 that lily-white Obama states such as Iowa and New Hampshire could be particularly vulnerable for Democrats in 2016. The Granite State also has a sizable number of independent voters, a group Trump appeared to be attracting. In fact, looking back to the 33 states with exit poll data in 2012, New Hampshire had the second-largest share of self-identified independents (43% of voters).

However, as it turns out, one of Trump’s strengths — his disproportionate support among blue-collar, non-college-graduate white voters — is almost certainly a liability in the Granite State. Out of the 50 states, New Hampshire has the fourth-largest percentage of non-Hispanic whites with at least a bachelor’s degree in the country, with 32% of the state’s age 25-or-older population meeting those criteria. So while Trump can arguably make a play in Rust Belt states such as Ohio (only 22% whites with at least a bachelor’s degree) and Pennsylvania (just 24%), as well as Iowa (24%), New Hampshire’s mostly white voter base holds less potential for Trump. Our friends at the Cook Political Report have estimated that about half of the New Hampshire electorate will be made up of college-educated whites, well above the 37% projected national rate.

New Hampshire’s new status is no small change, since we are putting Clinton over the 270-mark in the Electoral College (273 electoral votes, to be precise) with states we have classified as Likely Democratic or Safe Democratic. Clinton had previously been at 269 in those categories. To us, this means that Trump has to find a way not just to sweep all Republican states and the remaining states classified Leans Democratic (see our map, below) but to dislodge at least one Likely or Safe Democratic state. Anything can happen over the next dozen weeks, but we wouldn’t recommend betting your children’s college funds on a Trump administration. 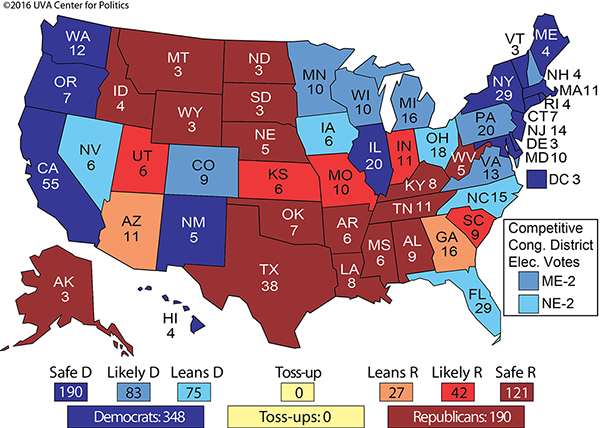 What about the overall picture? As our regular readers know, we’ve been the Rock of Gibraltar when it comes to a Clinton victory. Our first electoral map, issued at the end of March, showed Clinton at 347 EVs to 191 EVs for Trump, and all subsequent maps have maintained those totals — until now. After looking carefully at Nebraska’s 2nd District — Nebraska being, along with Maine, a state that awards one electoral vote to the winner of each congressional district — we’ve decided that NE-2 is leaning toward Clinton. It isn’t much of a lean, and it’s possible that if Trump can tighten up the contest, this one will wobble back to the Republicans. But for the moment, adding NE-2 to the Democrats makes Clinton’s total 348 EVs and Trump’s total 190 EVs. As you’ll recall, Obama carried this district in 2008 but lost it in 2012, so it’s on the margins — yet it also ranks 49th out of 435 congressional districts for percentage of non-Hispanic whites with a bachelor’s degree or higher. Moreover, not only is Clinton investing ad money in Omaha, which also bleeds into the western parts of swing state Iowa, she is also spending actual campaign time in the city, a sign that her campaign believes it can win this extra electoral vote. And did we mention Warren Buffett, a huge Hillary fan, dominates the economic landscape there?

We’ve heard from many of you asking why we haven’t switched Arizona and Georgia to Clinton. The answer is simple: There’s not enough evidence yet to justify doing so. The polling averages are basically tied in both, so we’ll keep watching. Probably these states would be the next on our map to change color if a blue tide is in the Nov. 8 forecast. On the other hand, if Trump manages a modest recovery, Arizona and Georgia would remain in his column.

By the way, we’re lowering Kansas and South Carolina from Safe Republican to Likely Republican after recent closer-than-expected surveys surfaced. In the former, the latest statewide poll from SurveyUSA had Trump ahead by just five points, 44%-39%, and notably it showed Clinton ahead 45%-35% in the Kansas City region. Echoing that finding, an internal survey for Rep. Kevin Yoder (R, KS-3) showed Clinton up 44%-38% over Trump in a district that is mostly in the Kansas City area. In addition, KS-3 was a 54%-44% Mitt Romney district in 2012, further confirming our views of NE-2, which voted for Romney by 53%-46%. Meanwhile, a Public Policy Polling survey found Trump up only 41%-39% in South Carolina, and it is a state with a high Democratic floor (but a low ceiling) because of a large black population and the Palmetto State’s racially polarized voting. We certainly don’t expect either Kansas or South Carolina to vote Democratic. Still, we have noticed that many deep red states may be preparing to produce lower-than-usual pluralities for Trump. It won’t matter in the Electoral College, of course, but it will be reflected in the national popular vote total.

Let’s suppose Trump gains steam in the fall, maybe after some entertaining or overpowering debate performances. (This is a hypothetical, not a prediction.) Where could he grab states currently in our Democratic column? Three big states that are perfectly capable of voting Republican stand out: Florida, North Carolina, and Ohio. To this let’s add Iowa. So far Trump is faring better in the Hawkeye State than in other competitive swing states. It’s not difficult to see why. Almost half of Iowa’s electorate will likely consist of non-college whites, while minority voters will probably comprise less than 10%. Clinton has never been a favorite at Iowa’s caucus time, though she secured a paper-thin victory in February 2016 after a third-place finish in 2008. Democrats will have to work hard to gain these six EVs in November.

Returning to ground level, however, suppose Trump wins all the Romney states (206 EVs, which includes North Carolina and NE-2) and he adds Florida, Ohio, and Iowa. Trump will be at 259, still short 11 EVs. It isn’t at all obvious where the extra 11 would come from, though the easiest path might be Nevada (six EVs) and New Hampshire (four) to produce a 269-269 tie. Presumably, the House of Representatives will remain Republican and at least 26 states will have a unit vote in favor of the GOP and Trump. Presumably. Or will there be defections in a few strategically placed states?

And wait — didn’t we just change New Hampshire to Likely Democratic? Daydreams and nightmares don’t last long in the August hothouse of 2016.