— In aggregate, Joe Biden’s national lead over Donald Trump so far this year is very similar to the lead Hillary Clinton held over Trump in the first half of 2016.

— However, Biden’s lead has been more stable.

With less than five months left in the 2020 election campaign, former Vice President Joseph Biden continues to lead President Donald Trump in both national and swing state polling. In the past few weeks, Biden has widened his lead in the RealClearPolitics national poll average from less than six points to about eight points.

Of course, astute poll watchers will recall that four years ago, Hillary Clinton also led Donald Trump in most national and swing state polls. In the end, though, Trump won the election by narrowly defeating Clinton in several key swing states. So how does Biden’s current situation compare with Clinton’s in 2016?

A close analysis of national polling in 2016 and 2020 based on data compiled by RealClearPolitics indicates that Biden’s lead over Trump has been only slightly larger than Clinton’s lead over Trump between January and early June. However, Biden’s lead has been much more consistent. The data for both years are summarized in Tables 1 and 2. Table 1 shows the aggregate data for Clinton vs. Trump both through mid-June of 2016 and also for the entire election year, as well as Biden vs. Trump for 2020 so far; Table 2 shows the monthly average Democratic lead for the 2016 election year as well as 2020 so far. 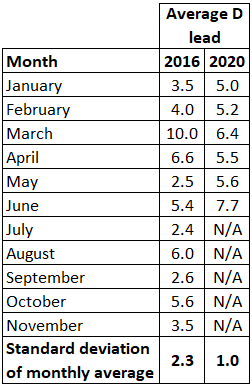 Notes: Polls included in the mid-June calculations are those with field dates before June 10 in both 2016 and 2020. In Table 2, the June 2016 entry includes all polls with a field date ending in June, while the June 2020 entry only includes polls released through the morning of Monday, June 15.

Source: RealClearPolitics; research by author. Polls included are those with field dates before June 10 in both 2016 and 2020.

Hillary Clinton led Donald Trump in the large majority of national polls in 2016. However, the magnitude of that lead varied considerably over time. This variability may reflect that fact that in an open seat contest like 2016, the choices of voters can be influenced more by the candidates’ campaigns and the changing news background. In contrast, Joseph Biden’s lead over Donald Trump has been far more consistent in 2020. This consistency may reflect the fact that Donald Trump is now running as an incumbent with a proven track record. When an incumbent like Trump is running for reelection, the election is mainly a referendum on the incumbent’s performance. The candidates’ campaigns and the developments in the news are probably less important.

Voters’ opinions of Donald Trump’s performance have been extraordinarily stable throughout his presidency with negative evaluations generally outweighing positive evaluations. That is the main reason why Trump has consistently trailed his Democratic challenger in the polls. The fact that the ratio of negative to positive evaluations of Trump’s performance has increased in the past few weeks probably also explains why Biden has been enjoying his largest margins in national polls at any time in 2020.