(A valid argument can be made that despite the size of the Obama win, Democratic gains in the House and Senate in 2012 were so underwhelming that the “wave” designation was overstated.)

Well, the answer is no. There is nothing magical about two very different sets of five elections, but the differences in both sets underscore how much volatility there is in American politics today. 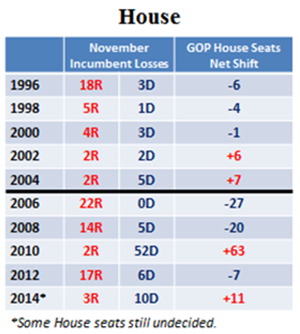 An argument can be made that 2012 does not really fit the model for a wave, because Republicans only lost seven net seats (and less than five in the Senate as you will see below). It might be a bit of a stretch to call 2012 a wave, but I think the size of the Obama electoral vote victory tips the scale toward calling it a Democratic wave.

The Senate is not as dramatic as the House, but there are still a few clear differences between the smoother political sailing of 1996-2004 to the turbulent waves in the last five elections: 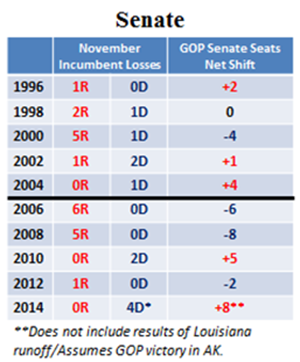 With the exception of 2012, the other four wave elections had a minimum of five seats shift from one party to the other. For the previous five calm elections, a shift of four was the high. So, on the Senate side, it is arguable that the over/under on a wave is five.

Compared to the other elections, 2012 makes a pretty strong case that Obama’s wave was personal, because it did not fully extend to Senate and House Democrats. Some of the Democratic failures to capitalize on the Obama win in their House campaigns is a direct result of Republican control of redistricting — Democrats netted 10 challenger gains but lost ground in the open seats!

Will we ever see a calm election again? Well, almost certainly. This run of wave elections is unprecedented in modern political history. And, the first rule of political forecasting is that, as I like to quote myself saying, “Trends are trends until they change,” which I postulated after Bill Clinton did not just pick, but smashed, the once powerful Republican Electoral Lock. At some point the tide of wave elections will roll out and calm elections will occur again.