— Ahead of several delegate-rich contests this month, both national and state-level polls suggest that Joe Biden is solidifying his lead over Bernie Sanders.

— Though a handful of states will be voting tomorrow, Michigan, given its significance in the 2016 primary, will be a focal point of the night — and is likely a must-win state for Sanders.

— But some of Sanders’ great showings outside of Detroit from 2016 seem unlikely to repeat themselves this time.

— In Montana’s Senate race, Democrats now have their best-possible recruit, in Gov. Steve Bullock. We still see Sen. Steve Daines (R-MT) as a favorite but are moving this race from Likely Republican to Leans Republican.

The wave that Joe Biden rode to a surprisingly strong Super Tuesday is showing no signs of abating.

Just to put in perspective what a strong position Biden now finds himself in, CNN and Quinnipiac University released fresh national polling today finding Biden up 16 and 19 points, respectively, on Bernie Sanders. As strong as those leads are, much of the state-level polling from the past few days of the March 10 and 17 primaries shows leads for Biden that are even larger than those national surveys.

A slew of Michigan surveys had Biden up from anywhere from 13 to 41 points. Two Missouri polls had Biden up by 20-plus points. Mississippi, the state with the largest African-American population, is going to Biden in a landslide, as a 55-point polling lead indicated. Biden was up more than 25 points in an Arizona poll (the Grand Canyon State votes next week).

The only state where polls are not lopsided is Washington, where a couple of surveys released after Super Tuesday have showed basically a tie. But given Sanders’ strength out west so far, Biden potentially winning Washington would be a devastating blow to Sanders. And even a Sanders win might not mean all that much, because any delegate edge might be slight.

Overall, the numbers point to Biden expanding his delegate lead over Sanders tomorrow night. As of right now, our Crystal Ball/Decision Desk HQ national delegate count shows Biden up 608-532 over Sanders, with about 240 delegates still left to allocate from contests that have already happened. As of this precise moment, Biden needs about 51% of the remaining unallocated delegates to win a majority, while Sanders needs about 54%. The chances of no one winning a majority of delegates during the nominating season are now extremely small: As of right now, Biden and Sanders have won nearly 90% of all the pledged delegates allocated, and as the only two contenders left who plausibly will be winning delegates going forward once the book is officially closed on Super Tuesday — a third remaining candidate, Rep. Tulsi Gabbard (D, HI-2), is a very minor figure in this race at this point — Biden and Sanders would have to come very close to tying for the remainder of the nominating season in order for neither to hit the majority.

That doesn’t seem likely, and if the polls are right, Biden is going to build on his delegate edge tomorrow. Mississippi seemed like it would be a blowout the instant Biden’s lead regenerated in South Carolina (both states have majority-black primary electorates), and Missouri does not appear as though it will be particularly close. Sanders could win one of Idaho and North Dakota (or both) — there really aren’t any data available about either state — but whatever delegate edge Sanders hypothetically could get from those tiny states will be overridden by Mississippi alone. As noted above, Washington state seems legitimately competitive, but that in and of itself is good for Biden, whose victories so far have all come in places east of Texas (that of course includes Texas).

Michigan, which resuscitated Sanders in 2016, is vitally important for him once again this year, if only to prevent the race and narrative from totally getting away from him. He campaigned hard in the state over the weekend, deploying surrogates like Rep. Alexandria Ocasio-Cortez (D, NY-14) and former presidential candidate Jesse Jackson Sr., who endorsed Sanders yesterday. Polls missed Sanders’ upset in Michigan in 2016 in what was one of the biggest polling misses in recent memory. Biden’s lead in some of the same polls that missed last time is similar to Hillary Clinton’s from four years ago, although pollsters argue that they have better estimates this time, according to Politico‘s Steve Shepard.

There are reasons beyond the polls to suspect that Sanders is unlikely to repeat his big upset from four years ago.

One of the hallmarks of Sanders’ shocking Michigan primary win was his broad strength throughout the state. Outside of a few urban areas with significant African-American communities (such as Detroit, Flint, and Saginaw), Sanders dominated elsewhere in the state (Map 1). 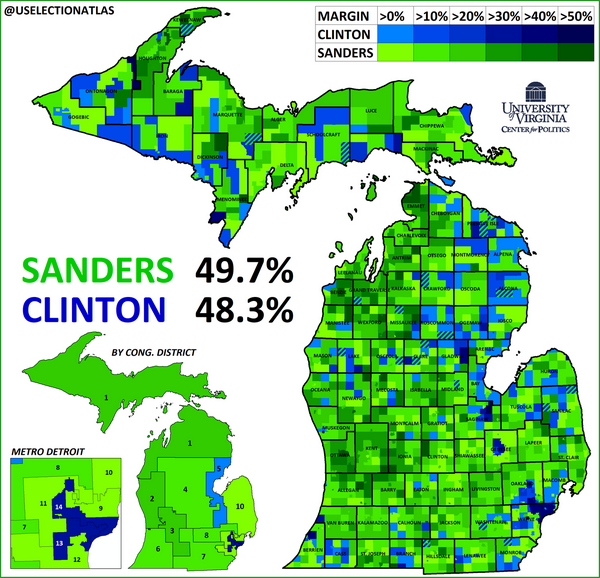 To some extent, Sanders’ support in the state seemed like something of a protest vote against Hillary Clinton. Sanders’ 2016 primary upset was powered by his margins in the rural parts of the state — in November, Trump would go on to far outpace the GOP baseline there. On Super Tuesday, there was little evidence that this dynamic still existed. Rural areas where Sanders found support four years ago, such as eastern Oklahoma and western Minnesota, almost uniformly flipped to Biden.

Additionally, in 2016, Sanders ran especially well in the Michigan suburbs. In the 2018 midterm, Democrats flipped two suburban seats in the state — the 11th District, which soaks up much of Oakland County, and the 8th District, which runs out to Lansing. Sanders carried both in the 2016 primary, though not by overwhelming margins, so if Biden is performing well tomorrow night, his gains should be quickly apparent in the suburbs.

Again, the results from Super Tuesday paint a promising picture for Biden. In Minnesota, Biden fared especially well in the 3rd Congressional District; this blue-trending seat in the Minneapolis area gave Biden a 46%-24% advantage over Sanders, better than his statewide margin. There are some similarities between MN-3 and the two aforementioned Michigan districts, MI-8 and MI-11.

In 2016, Sanders also won Kent County (Grand Rapids), a growing, populous county in western Michigan that has a bit higher-than-average levels of four-year college attainment. Kent is traditionally Republican but is becoming more competitive, and Sanders won it by a punishing 25-point margin in 2016. Based on the polling and what we’ve seen in some other parts of country, it would be shocking if Sanders came even close to replicating that margin this time, if he wins the county at all.

In Virginia, Sanders’ strength was limited to the college towns of Charlottesville (where the Center for Politics is based) and Harrisonburg (home to James Madison University), as well as a smattering of rural precincts. Virginia may offer a template for Michigan, especially if the result is a clear Biden victory. It’s easy to see Sanders carrying college cities again, such as Ann Arbor (University of Michigan) and East Lansing (Michigan State University), but, from there, his route to replicating his winning coalition seems unclear.

The bottom line is that Sanders needs a huge upset somewhere to reignite interest in this race and his candidacy. If Biden scores another big set of victories, it’s easy to imagine Democratic voters further rallying to the former vice president, particularly in the midst of the growing coronavirus crisis.

This is aside from the delegate math, which is moving toward Biden and seems likely to continue to even if Sanders scores the Michigan upset he seeks and follows that up with wins in Illinois and Ohio next week (which also seems unlikely as of now). But even if that happens, Florida on March 17 and Georgia on March 24 both seem very likely to give Biden huge wins regardless of what happens in the Midwest.

Michigan is the place Sanders naturally will look for a miracle, but his odds seem even longer now than they were when he beat the odds four years ago.

Last week, we noted that we would be moving the Montana Senate race from Likely Republican to Leans Republican if Gov. Steve Bullock (D-MT) challenged Sen. Steve Daines (R-MT). He officially announced for Senate on Monday morning, so we went ahead and made that move. Bullock is a solid recruit although Daines is an incumbent senator in a red state without obvious liabilities. That Bullock will make Daines and national Republicans have to work hard to retain a seat that otherwise would’ve been a cakewalk is a victory for national Democrats, who desperately wanted Bullock to run. 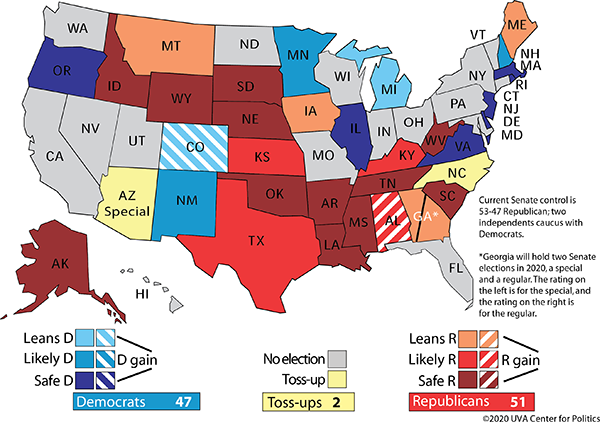 It is worth noting that, as of a couple of weeks ago when Sanders seemed best-positioned to win the Democratic nomination, Republicans were hopeful (and Democrats fearful) that a Sanders nomination might help the GOP down the ballot. But the Republicans did not really translate those hopes into fresh candidate announcements, although during that time period, veteran Rep. Fred Upton (R, MI-6) finally announced he would run for reelection after seeming to waver and cited Sanders’ possible nomination as a factor in his decision.

Meanwhile, since the nomination race has turned toward Biden, who leading national Democrats (and Republicans) generally seem to believe is a stronger challenger to Trump, Democrats have scored two candidate-announcement victories: Bullock jumped in the Montana Senate race, and Rep. Collin Peterson (D, MN-7) finally announced he would seek another term. Peterson is the only Democrat who can hold MN-7, a district that Trump won by 31 points. We feel very confident in asserting that Biden taking command of the Democratic race played a role in both of these decisions.

Given the national House and Senate maps — both the median House and Senate seats by 2016 presidential performance are a few points to the right of the nation as a whole — Democrats have to more consistently compete on less favorable turf than Republicans to win House and Senate majorities. That makes recruiting candidates with proven crossover appeal like Bullock and Peterson more important to their chances of winning majorities in both chambers.