California is such a massive state — if it were an independent nation, it would have the eighth-largest economy in the world — that it has long been the subject of partitioning proposals. Now a new plan is calling for the Golden State to be dismembered into six new states. The proposal could possibly go before California voters in November should proponents collect the required number of signatures of nearly 808,000 registered voters to put the proposition on the ballot. 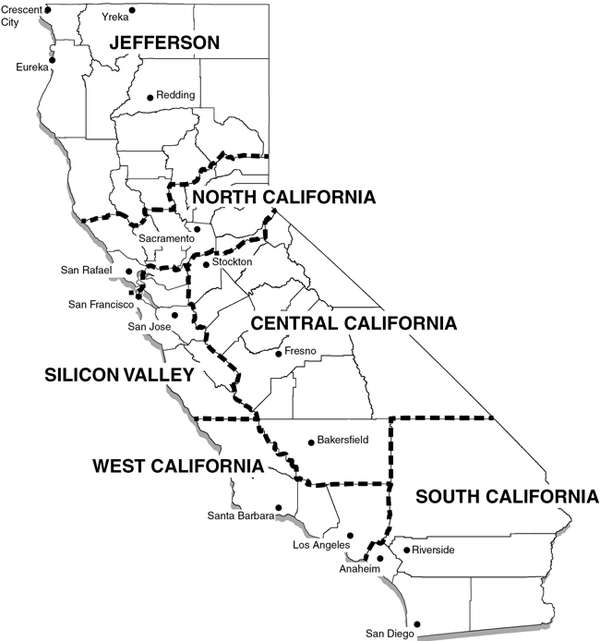 The Crystal Ball loves a good hypothetical, so putting aside the unlikelihood of this partition, let’s consider its potential political ramifications. Besides necessitating several new flag designs and state capitals, an increase to 55 states would naturally alter the shape and size of the U.S. Senate, U.S. House and the Electoral College. So it turns out a simple ballot proposition would be anything but.

The 2012 election with six new states

A good starting point is to consider what the 2012 presidential election would have looked like with the proposed six states in place of California. The data for the new states are below in Table 1, giving us an overview of the political makeup and relative influence each new state would possess. 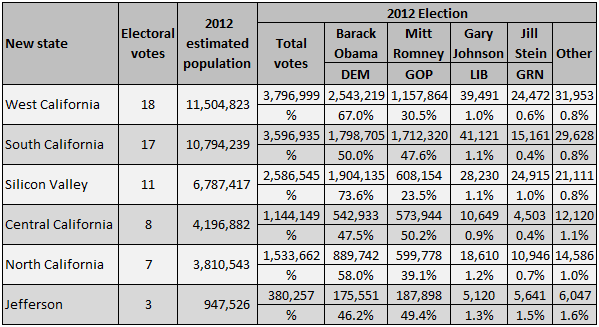 In place of safely Democratic California and its 55 electoral votes, the six new states would boast 64 electoral votes. The 10 additional senators from these states, net, would put the Electoral College total at 548, up from its present 538. However, from an Electoral College perspective, Republicans might favor the proposal because it would likely give them an opportunity to win electoral votes in a state that hasn’t given them any since 1988.

However, the other three states would all have been battlegrounds in 2012. Obama would have won the second largest of the new states, South California, by only a little over two percentage points. At the same time, Mitt Romney would have won Central California by almost three points, and Jefferson by a little more than three. To put these margins in perspective, Obama won Ohio by three points, while Romney won North Carolina by two points, so this trio of states would have seen a fair amount of attention on the campaign trail in 2012. Given its competitiveness and size, South California in particular would be a swing state on the order of Ohio. Out of these three states, Obama would have tallied 17 electoral votes, and Romney 11.

How would this have affected the national arithmetic? In 2012, Obama won the Electoral College 332 to 206. Out of the six new states’ combined 64 electoral votes, Obama would have won 53 while Romney would have won 11. Therefore, with these new states in play, the national outcome would have been Obama 330, Romney 218. (North Carolina, which Romney won, would actually gain an electoral vote out of all this; more on reapportionment below.) Essentially, the Democratic total would have remained the same while Republicans would have gained a few electoral votes. All in all, a GOP presidential nominee would benefit at least a little from this plan.

How would the six new states change Congress?

The principal impact on Congress would come on the Senate side. A net increase of five states would mean 10 new senators, increasing the size of the upper chamber by 10%. Instead of having 33 or 34 seats up for election every cycle, the Senate would have 36 or 37, depending on the class. With 110 senators, a party would need 56 for an outright majority, or 55 and the vice presidency to win a tie-breaker. Democrats currently hold a 55-45 advantage in the Senate. Taking California out of the equation before considering the 12 new seats, the Senate would be 53-45 Democratic.

At the presidential level, the other three states would have gone one way or the other by two to three points, making it harder to estimate their hypothetical Senate representation. So let’s use three scenarios to get an idea. If Democrats controlled all six seats in Central California, Jefferson and South California, that would give them a commanding 65-45 edge in the Senate. Alternatively, if the GOP controlled all six seats, Democrats would have a 59-51 majority in the Senate. And if the three states had split delegations, Democrats would control the Senate 62-48. All in all, it’s easy to see why Democrats would stand to gain from an expanded Senate — splitting the seats in these three competitive new California states, or even just winning one-third of them, would improve upon their current 10-seat advantage.

Running the “Amazing Apportionment Machine,” as the U.S. Census Bureau labeled the process in a 2010 promotional video, the six states would have a combined 52 House seats based on the 2010 census data. (For a more complex look at the reapportionment process, we recommend reading this Congressional Research Service report.) Each proposed state’s number of House seats is shown below in Table 2. Interestingly, California presently has 53 seats, but reapportioning with the six states in California’s place actually ends up giving an extra House seat to North Carolina at the expense of the former California states (and therefore an extra electoral vote, too).

Table 2: Number of House seats for the six new states

At present, Democrats control 39 of California’s 53 House seats. What might the “trans-California” delegation of 52 seats look like with six states?

Jefferson: Starting up north, the state of Jefferson would have only one House seat. Considering Romney would have won it by slightly more than three points, there’s a good chance in this era of few crossover districts that a Republican would win the seat. 1 R, 0 D

North California: The proposed state of North California gets more conservative as you move east. The counties along the Pacific Ocean went for Obama by 71% or more, while the western interior counties went for Obama at a rate of 63% to 66%. The biggest county in the new state, Sacramento, was a 58% Obama county, but Romney won every other county north and east of Sacramento, most with 57% to 59% of the vote. Given the populations of the eastern counties, a conservative House district would encompass most of them. Depending on how the Sacramento-area districts would be drawn, they might look somewhat like the two there today — a strong Democratic district and a highly competitive district currently in Democratic hands. The state’s two western districts would be safely Democratic. 4 D, 1 R

Central California: Large swaths of conservative territory in the southern and eastern parts of the state would surely be represented by two Republicans, but it seems likely that the other four seats would all be in the mix most cycles. There would have to be two Hispanic-majority districts, but both would be probably be competitive, much like the two seats currently held by Reps. Jim Costa (D) and David Valadao (R). Besides that, there would likely be two districts in the northwestern part of the state, with each party having a small advantage in one. 4 R, 2 D

Silicon Valley: There is a decent chance that all nine of Silicon Valley’s House seats would go Democratic. Obama not only won every county in the state, but he also won more than 66% of the vote in all but one county — San Benito County, which gave Obama 59% of the vote. 9 D, 0 R

West California: Centered mainly around Los Angeles, most of the seats in West California would be Democratic. But there would be at least one seat that Romney would have narrowly carried in 2012, similar to the seat currently held by Rep. Buck McKeon (R). There would also be a couple of marginally Democratic seats in the mold of those held by Reps. Lois Capps (D) and Julia Brownley (D) that could be won by Republicans in the right year. 15 D, 1 R

South California: At the southern-most end of South California around San Diego, Democrats would probably control a district centered on the city and a Hispanic-majority district similar to the one currently held by Rep. Juan Vargas (D). There might also be a toss-up district like the one held by Rep. Scott Peters (D), while the other two San Diego County-centered districts would be safely Republican. There would probably be two safe Republican districts in Orange County and another relatively Republican seat, with possibly part of a conservative San Diego County district reaching into the county (akin to Republican Rep. Darrell Issa’s current district). But a majority-minority district held by Democrats would be carved from the county as well. Meanwhile, six districts would be anchored mainly in San Bernardino and Riverside counties. Of those six, one district would be majority-minority. Beyond that, two would likely be safely Republican, one would probably lean Democratic and there would be two other very competitive seats. 8 R, 7 D

Much of this analysis is guesswork based on the current lines of many existing California districts and utilizing the fantastic redistricting sandbox that is Dave’s Redistricting App. Still, our sum total for all the new California states together would be 37 Democratic districts and 15 Republican districts, almost identical to the current delegation. Of course, if some or all of the states go back to allowing their respective legislatures to redistrict, all bets are off on what the House delegations would look like.

For any number of reasons, this proposed multi-California scheme is unlikely to ever become reality. First, it’s unclear if a majority of California voters would ever approve such a plan — we tend to doubt it. Second, even if Golden Staters did pass a six-state proposition, the U.S. Congress would have to allow the new states to join the Union.

That second condition will be an impossible hurdle. Although Republicans might have something to gain in the Electoral College, they would never want to create three new states that are strongly Democratic as well as three very competitive states while getting no strongly Republican states in return. And while Democrats might love being in a position to gain Senate seats, they might not want to give up some of California’s rock-solid 55 electoral votes every presidential year. At the end of the day, no Congress will agree to this plan, a requirement for any state partition. Well, except possibly Texas — but we’ll save that for another time.