The Crystal Ball and Decision Desk HQ have been calculating and tracking the Democratic pledged delegate allocations during the presidential primary season. Georgia’s presidential primary was originally scheduled for Tuesday but has been moved to May 19. That means there will be no new delegates up for grabs until Hawaii’s party-run primary on Saturday, April 4.

With a break in the schedule, we thought we’d update readers on the state of the race, where Joe Biden has captured an imposing delegate lead.

The Democrats Abroad announced their election results on Monday, with Bernie Sanders capturing 57.9% of the vote to Joe Biden’s 22.7%. That translates into nine delegates for Sanders and four for Biden. Still, Biden’s overall lead is close to 300 delegates.

As states continue to process votes and confirm their results, we continue to update our delegate counts from contests held in March. A summary of states with delegates remaining to be allocated is presented in Table 1 (as of Wednesday afternoon).

Table 1: Remaining delegates to be awarded from states that have already voted 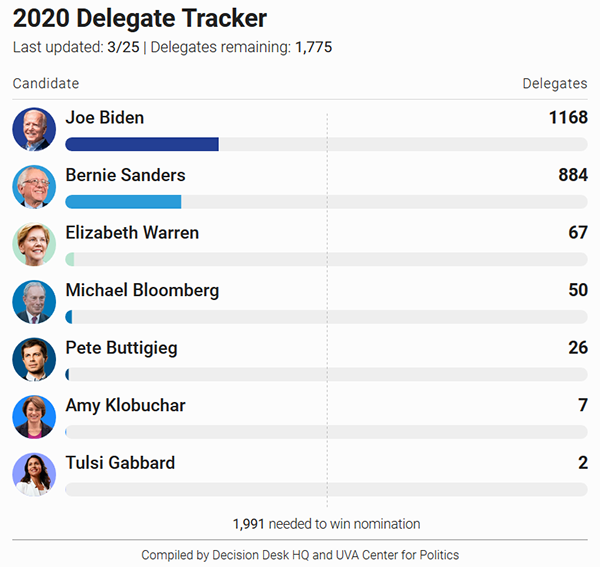 Due to the coronavirus outbreak, several states have postponed upcoming elections. The original schedule, alongside postponement dates, is listed below. We will have delegate counts for these elections available shortly after results are final and will continue to update remaining March delegates as results are finalized. The elections are primaries, unless otherwise noted below.