Accurately or not, Barack Obama has been compared to a number of famous politicians:  FDR, JFK, Ronald Reagan, even Jimmy Carter. But no one as yet has compared him to Michael Dukakis.

Yet as a reference point, Dukakis might be as good as anyone. A look at his vote-getting performance in his unsuccessful 1988 presidential run in relation to Obama’s 2012 reelection victory shows both how far the Democrats have come at the presidential level, as well as where they have lost ground.

Why compare these particular elections? Basically because of the parallels in their historical timing. Dukakis ran in the sixth and last presidential election in an era of Republican domination that lasted from 1968 through 1988. The GOP won the White House five times in this period.

Meanwhile, Obama was reelected last fall in the sixth election in a more Democratic period that was launched in 1992. Beginning with Bill Clinton’s election that year, the Democrats have won four presidential contests and the popular vote in a fifth.

Placed side by side, the two elections show just how much the political landscape has changed at the presidential level in the last quarter century.

Altogether last November, Obama won a larger percentage of the total vote than Dukakis in 31 states (plus D.C.), including 13 states where Obama outpaced Dukakis by at least 10 percentage points. The latter included an eclectic group of vote-rich states — New Jersey and New York in the Northeast, Florida and Virginia in the South, and California on the Pacific coast.

But there were 19 states where Dukakis drew a higher percentage of the vote than Obama did in 2012. With the exception of Texas, they were basically more rural states in the South, the agricultural Midwest and the Mountain West. Yet the largest falloff in the Democratic vote from 1988 to 2012 came in West Virginia, a state that Dukakis won with 52% of the vote but where Obama struggled last fall to reach 35%. It was the only state that Dukakis carried but Obama did not in either of his presidential runs.

Chart 1: Comparing the 1988 and 2012 presidential elections: States where Democrats are running better… and worse

Map 1: Improvement/Decline in Democratic performance from 1988 to 2012 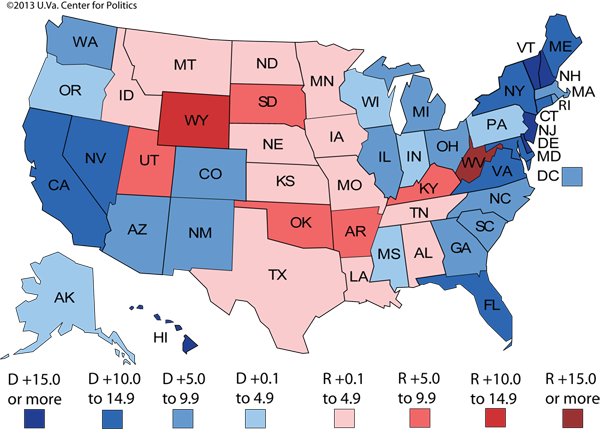 In terms of population, there are three basic elements of the American electorate — the cities, the suburbs and rural America. Democrats have succeeded as of late by revamping the first two to their advantage.

Through much of the 1970s and 1980s, Republicans handily won the White House by combining the suburbs and the countryside, leaving major urban centers and little else to the Democrats.

But in the last two decades, Democrats have converted many of the suburbs to their side and have run up their margin of victory in the cities. The resultant urban-suburban coalition has proved to be a powerful one, giving the Democrats the upper hand in recent presidential voting.

Case in point: Of the nation’s 39 counties with a 2010 population of at least 1 million, Obama swept 35 of them last fall. Altogether, they gave the president a plurality of nearly 8 million votes, roughly 3 million more than he carried the nation as whole.

But what enabled Obama to win many of the major states across the country was his ability to combine overwhelming strength in the cities with a strong showing in populous suburbs. Oakland County, MI, for instance, where Republican standard-bearer Mitt Romney was raised, gave Obama 54% of the vote in 2012. Montgomery County, PA, once the cornerstone of the state GOP, gave Obama 57%. And Fairfax County, VA, the most populous jurisdiction in the Old Dominion, delivered 60% of its ballots last fall for the president. In 1988, Republican George H.W. Bush swept this trio of major suburban counties with at least 60% of the vote.

A growing minority population in the suburbs has been a Democratic asset. So has the decline of the Republican “brand” — from fiscally frugal and socially moderate a generation ago to Southern-based and socially conservative more recently. And Democrats have benefited of late from a succession of competent presidential candidates, even largely appealing ones in the cases of Obama and Clinton. They have been able to mobilize their party’s base vote and make large inroads among independents. 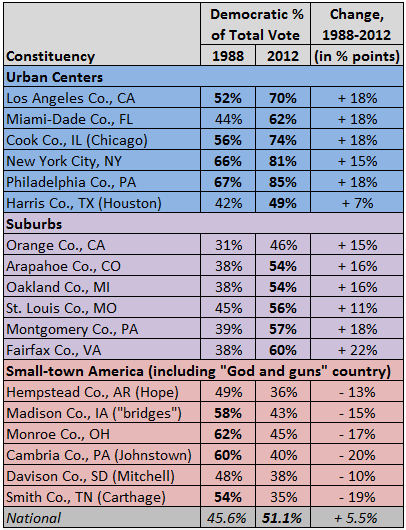 Note: Cambria Co., PA, features the small city of Johnstown, but is included because of its cultural affinity to other counties in the latter category.

But modern day Democratic tickets have not played well everywhere. Obama carried less than one-quarter of the nation’s 3,100-plus counties (and related jurisdictions such as independent cities, legislative districts in Alaska and parishes in Louisiana). His total of 705 was actually more than 100 fewer than Dukakis carried in 1988.

No doubt, there has been a decline over the years in “yellow dog” Democrats — generally defined as white voters, frequently rural and Southern, who would loyally vote for a Democrat of any stripe. They are literally a dying breed. And in 1988, there was a farm crisis that tended to boost the Democrats in the upper Midwest in particular.

Still, Obama’s failure in 2012 in large parts of rural America was eye-catching. He carried only four of 95 counties in Tennessee, four of 116 in the once hotly contested swing state of Missouri (including the independent cities of St. Louis and Kansas City in the tally), four of 120 in Kentucky, two of 105 in Kansas, one of 93 in Nebraska, and none at all in Oklahoma, Utah and West Virginia. Needless to say, Obama lost all of these states in 2012 by decisive margins.

To be sure, the nation’s towns, villages and countryside are normally the cornerstone of the Republican base. But Democratic presidential candidates that hail from the small-town South have been able to make deep inroads in rural America. Jimmy Carter won a majority of the nation’s counties when he won the White House in 1976, while Clinton came close to carrying as many counties as his GOP rivals in his successful presidential runs in 1992 and 1996.

A question to be answered in the years ahead is how much of the Democrats’ current rural problem is a reaction to Obama — his race, his name and his damaging comment in 2008 about rural voters who “cling to guns or religion.” The remark was recorded at an Obama fundraiser in San Francisco in advance of the Pennsylvania primary that year but came to be viewed by many as Obama’s disdain for rural voters in general.

Yet the flip side of this equation is just as important. How well can future Democratic tickets fare in the nation’s populous metropolitan areas without a historic candidate such as Obama? They should certainly do reasonably well because of the demographics. But Obama has had an especially strong appeal to minorities, young voters and white liberals that could be difficult for future Democratic presidential candidates to match.

In short, presidential elections are contested in an evolving political landscape, one where the Democrats have the advantage nowadays, just as the Republicans did a quarter century ago. But now, as then, it is a landscape subject to change. 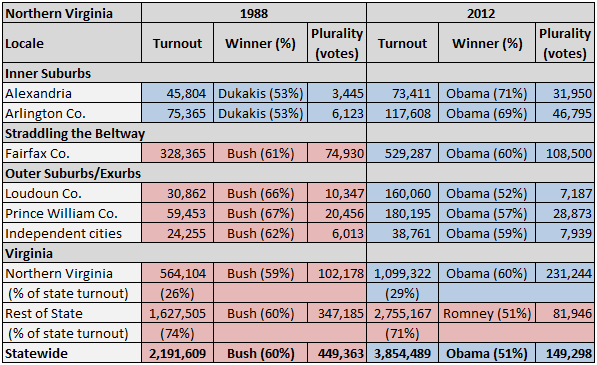 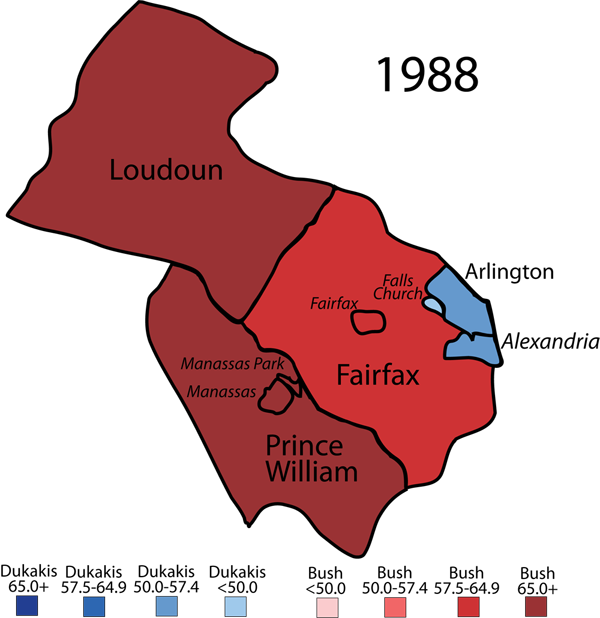 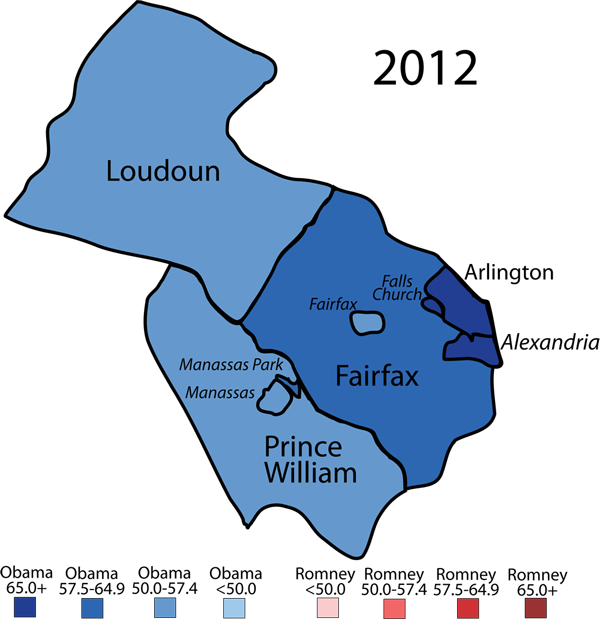