— Democrats have gained massive ground in their battle for state legislatures since an overview in early May.

— There will likely be a Democratic net gain in state legislative chambers, breaking a few Republican trifectas and creating a new Democratic trifecta.

— The continuing electoral realignment between rural and suburban areas is present in state legislative races, as most Democratic flips are in the suburbs and most Republican flips are in rural areas.

The battle for the statehouses

Nearly half a year ago, the condition of the state legislatures didn’t look too bad for Republicans: They were at least slight favorites in most of their competitive chambers, they were favored to have a national net gain in single-member districts in state Houses and Assemblies, and they were only at a slight disadvantage in state Senates. Things seemed pretty balanced in the legislatures.

However, this balance was not lasting. Since our assessment of the state legislatures in the Crystal Ball in early May, the environment has shifted dramatically in the Democrats’ favor. After our initial analysis of state legislative fundraising in competitive districts in July, we found that Democrats have been wiping the floor with their competition in most states. As Election Day approaches, the money gap is only increasing.

Let’s take a look at places where it’s possible for one party or the other to create a so-called “trifecta,” where one party controls the governorship and both houses of the state legislature. 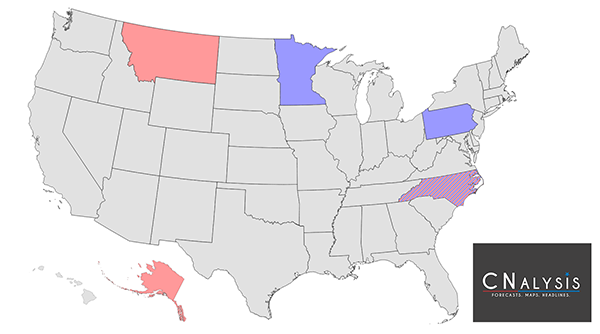 Due to the lack of competition in the gubernatorial races of New Hampshire and Vermont, a Democratic trifecta is no longer feasible in these states. While there are now fewer opportunities for Democrats to create trifectas in state governments, the three remaining trifecta opportunities in the states of Minnesota, North Carolina, and Pennsylvania have increased in likelihood thanks to changes in our state legislative forecast.

Meanwhile, Republicans have seen an increase in their odds of creating trifectas in the states of Alaska and Montana. Since our update in May, we have shifted our ratings of both the Alaska House and Montana gubernatorial races from Toss-up to Tilt Republican. However, the likelihood of a Republican trifecta in North Carolina has plummeted, as has the opportunity to create a trifecta in New Hampshire due to our latest forecast update that moves the rating of the state House to Safe Democratic. 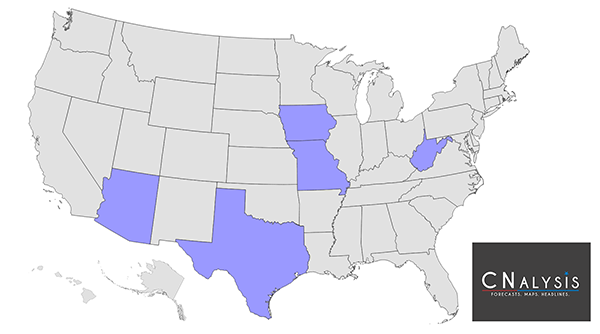 Democrats have five opportunities to break Republican trifectas in the states of Arizona, Iowa, Texas, Missouri, and even West Virginia. Unfortunately for Republicans, there are now zero opportunities for breaking up Democratic trifectas. Until last week, the Republicans might have stood a chance of breaking a trifecta in Maine; however, due to the chamber becoming Safe Democratic in our ratings, that opportunity has come and gone.

Since our overview of trifecta breakup opportunities in our Oct.18 update, Democrats have improved their odds of breaking Republican trifectas in the states of Arizona, Iowa, Texas and West Virginia, as we have changed our ratings in at least one competitive chamber in each state since then. Missouri is included because Democrats have a chance to win the state’s governorship.

The most notable of these changes is in the Texas House of Representatives; the Holy Grail for Democrats in their quest to flip state legislative chambers. Texas, which is projected to gain three U.S. House seats in the next House reapportionment. Republicans have gerrymandered the U.S. House maps there since winning control of the state legislature (Democrats were known for gerrymanders there before then). If Democrats can flip the lower chamber, they would have a seat at the table for drawing Texas’ U.S. House map, which would aid them in their fight for control of the House over the course of the next decade. The chamber was moved from Tilt Republican to Toss-up in our ratings on Monday.

As our chamber ratings suggest, Democrats are slightly favored to break Republican trifectas in the states of Arizona and Iowa, and are moderately favored to create a Democratic trifecta in Minnesota. They’re also slightly favored to flip the Michigan House, which would help incumbent Gov. Gretchen Whitmer (D) legislate.

Republicans are favored to flip the Alaska House due to the collapse of the majority coalition in the chamber, which consisted of Democrats, Independents, and a few Republicans. However, it’s not impossible that a new coalition could assemble after the election, just like in early 2019 after Republicans had beaten the previous coalition in the midterm.

CNalysis will be releasing our final overview of state legislatures on Nov. 2 on our home page. This includes eliminating all of our remaining Toss-ups (both chambers and districts) and putting them into a Tilt column.

You’ll also be able to view the final odds of the creation and dissolution of supermajorities in state legislative chambers here, by clicking the menu in the bottom left and selecting “HC Odds” or “SC Odds”. The two biggest supermajorities to watch will be the likely breakup of the Republican supermajorities in the Kansas legislature, which would prevent a Republican gerrymander in Kansas thanks to Gov. Laura Kelly (D)’s veto, and in the New York state Senate, where Democrats are favored to create a supermajority: if they succeed, they can override Gov. Andrew Cuomo (D)’s veto and pass more progressive legislation than he’d prefer.

CNalysis will also be live mapping the results of state legislative districts and chambers thanks to an army of volunteers. If you would like to keep up with the competitive districts that are being flipped or held by a party, you should keep this page open starting on election night.