— President Trump recently indicated that he wants the 2020 census reapportionment of House seats to exclude undocumented immigrants from the calculation.

— If undocumented immigrants are excluded, the 2020 reapportionment calculation will change, including changing the number of House seats allocated to the two largest states, California and Texas.

— There are significant legal and logistical hurdles that probably will prevent undocumented immigrants from being excluded from congressional reapportionment calculations.

On July 21, 2020, President Donald Trump addressed a memorandum to the U.S. Department of Commerce directing the Census Bureau to report to him, in addition to the 2020 Census population counts by state, the estimated numbers of undocumented immigrants by state. These data would be included in his report to the Congress on apportioning the U.S. House of Representatives for the 2022 elections. The New York Times reported that Trump’s “action directly conflicts with the traditional consensus interpretation of the Constitution and will almost surely be challenged in court, potentially delaying its effect if not blocking its enactment altogether.” Nevertheless, we explore here the implications of the president’s directive with respect to the 2020 apportionment of the U.S. House if undocumented immigrants are excluded. Which states would gain seats and which states would lose seats?

Apportioning the House in 2010

The main objective in apportioning the U.S. House is to assign equitably the 435 seats to the 50 states; the District of Columbia is not included in the apportionment. The first 50 seats are automatically assigned, one per state. The method of Equal Proportions is then used to divide up the remaining 385 seats among the states on the basis of the size of their populations. The method determines which states should receive second seats, which states should receive third seats, and so forth. The larger the population of a state, the more seats it receives. The method of Equal Proportions was first used to apportion the House in 1940 and has been used ever since.

The apportionment population of a state is defined as all persons residing in the state as of April 1, plus all American military and civilian personnel of the federal government and their dependents from the state who were residing abroad; this latter group is known as the overseas population.

The results of the apportionment based on the 2010 Census are shown in Table 1, column 2; the names of the states are listed in column 1. In 2010, the state receiving the largest number of seats was California with 53; Texas followed with 36 seats, and then Florida and New York with 27 apiece. The states of Alaska, Delaware, Montana, North Dakota, South Dakota, Vermont, and Wyoming each received only one seat, the one they are granted automatically.

Apportioning the House after the 2020 census

We then allocated the House seats to the states. We first gave each state its automatic first seat. We then used the method of Equal Proportions to assign the remaining 385 seats. The 2020 seat assignments are presented in column 3 of Table 1.

These projections are illustrated in Map 1. 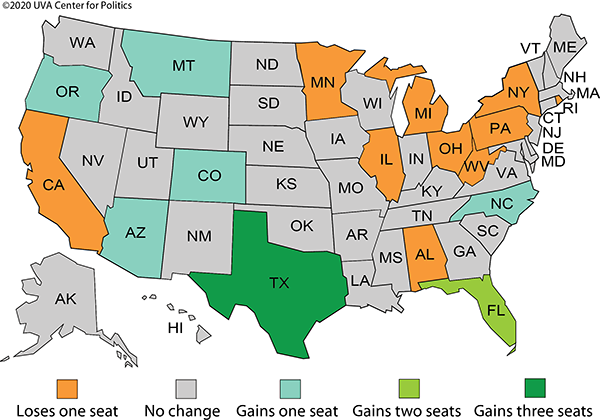 These results are almost the same as the projected 2020 seat assignments produced last year by Election Data Services.

Steven A. Camarota and Karen Zeigler of the Center for Immigration Studies published research late last year in which they also apportioned the House after excluding undocumented residents. Their results are the same as our results, except that they show New York, and not New Jersey, losing a seat. 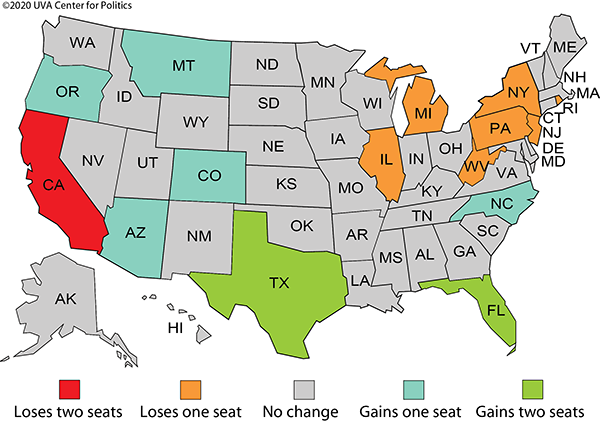 Our estimates of the numbers of undocumented residents for the states would not be sufficient for use in the official apportionment. Moreover, it is not clear whether the Secretary of Commerce could produce acceptable numbers of undocumented residents according to the timetable the new memorandum requires. Last year, President Trump’s Executive Order 13880 instructed the Bureau to develop its “best citizenship” assessment for each enumerated person by linking that person with administrative records held by government agencies. Those data, however, were to be made available to the states for redistricting (not for apportionment) and are not due until March 31, 2021. Also, the Supreme Court has struck down the use of sampling data for the purpose of congressional apportionment, and a direct count is impossible because of the well-publicized absence of the citizenship question. Whether there is enough time by Jan. 1, 2021 to compare every census return with administrative data seems doubtful.

Even if that gargantuan task could be accomplished, there are formidable obstacles both statutory and constitutional with respect to the exclusion of people who are “best guessed” not to be legally residing in the United States, according to Martin Lederman of the Georgetown University Law Center. Among these issues is that the only constitutionally established exclusion is for “Indians not taxed.” Also, the Constitution requires that apportionment be based on the actual number of inhabitants. Moreover, the president’s recent innovation in apportionment runs counter to the governing statute (2 U.S.C. §2a), which requires him to report “the whole number of persons in each state” and “the number of Representatives to which each state would be entitled  . . . by the method known as the method of equal proportions.”