Skip to content
Home
/
Explaining the Republican Victory in the Virginia Gubernatorial Election: Conversion or Mobilization?

— The non-presidential party often performs better in off-year elections than it did in the previous cycle’s presidential race. The recent Virginia and New Jersey gubernatorial races are no exception, both this year and historically.

— Based on exit polls, the Virginia electorate in 2021 was markedly more Republican-leaning than the 2020 presidential electorate.

Conversion vs. mobilization in 2021

Republican Glenn Youngkin’s victory in the 2021 Virginia gubernatorial election along with the surprisingly narrow win by Democratic incumbent Phil Murphy in the New Jersey gubernatorial contest shocked many observers of American politics. Both states had strongly supported Joe Biden in the 2020 presidential election, New Jersey by 16 points and Virginia by 10 points. The results of these two high-profile off-year elections have led to speculation that some key voting groups such as college-educated suburbanites that had swung Democratic in 2020 out of opposition to Donald Trump were swinging back to Republicans — a shift that could bode well for Republican prospects in the 2022 midterm elections.

The assumption underlying such analyses of the 2021 contests is that most of the shift between 2020 and 2021 was due to conversion: 2020 Democratic voters moving into the GOP column in 2021. There is another possible explanation for Republican gains in 2021, however — disproportionate partisan mobilization. According to the partisan mobilization hypothesis, off-year elections often produce a shift in turnout in favor of the party that does not control the White House. While turnout drops for supporters of both parties compared to a presidential election year, out-party voters are more motivated to turn out to express their discontent with the leadership of the newly elected or reelected president.

In this article, I will take advantage of exit poll data from the 2021 Virginia gubernatorial election (there was no exit poll in New Jersey) to examine the sources of the swing toward the GOP in that contest.[1] These exit poll results — though imperfect, just like any other survey — allow us to estimate the proportion of 2020 Biden and Trump voters who shifted parties in 2021 and the impact of changes in the demographic composition of the electorate between the two elections.

Before turning to the exit poll results, it is important to note that there was a remarkable degree of continuity in the results of the 2020 and 2021 elections in Virginia. Figure 1 displays a scatterplot of Virginia Democratic gubernatorial nominee Terry McAuliffe’s vote share by Biden’s major party vote share across all 133 Virginia cities and counties. The results show that there was a correlation of .996, very close to the maximum possible value of 1.0, between Biden’s vote share and McAuliffe’s vote share. In other words, Biden’s vote share almost perfectly predicted McAuliffe’s vote share. McAuliffe lost because he consistently ran between 1 and 9 points behind Biden’s vote share. In 56% of Virginia cities and counties, McAuliffe ran between 4 and 6 points behind Biden (or 8 to 12 points in terms of margin). A scatterplot of the New Jersey results shows a very similar pattern. What this tells us is that the voting patterns in both elections were highly nationalized: gubernatorial voting patterns followed presidential voting patterns very closely. 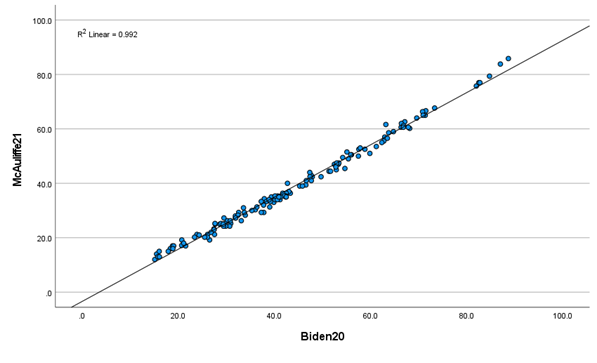 The shift of 5% of Biden voters to Youngkin versus 2% of Trump voters to McAuliffe would only account for a small fraction of the overall shift in results between 2020 and 2021. The vast majority of the shift in results was explained by disproportionate partisan mobilization. Simply put, 2020 Trump supporters were overrepresented and 2020 Biden supporters were underrepresented in the 2021 Virginia electorate. Thus, among respondents in the 2021 exit poll, 48% reported voting for Joe Biden while 44% reported voting for Donald Trump in 2020. Biden’s margin of 4 points among these voters compares with his margin of just over 10 points in the presidential election. 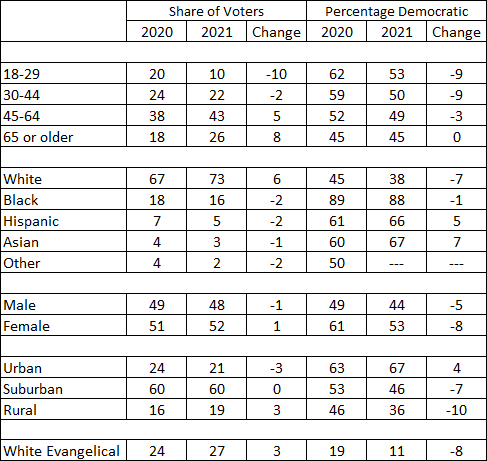 The data in Table 1 show that the 2021 electorate was also considerably Whiter than the 2020 electorate. In addition, White voters who turned out in 2021 were considerably more Republican than those who turned out for the presidential election. There is less evidence here of any swing toward Republicans among nonwhites although the results for Latinos and Asians should be viewed with considerable caution due to the relatively small numbers of Latino and Asian respondents in these surveys.

Republicans won in Virginia and came surprisingly close to winning in New Jersey because Republican voters were more energized than Democratic voters. In the California recall election, in contrast, Republicans apparently did not enjoy a major advantage in turnout and the GOP-sponsored recall effort fell flat. These results suggest that the results of the 2022 midterm elections will depend primarily on the ability of Republican and Democratic candidates to mobilize their own party’s supporters more than their ability to convert supporters of the opposing party.

[1] In this analysis, I am using results from Edison Research Exit polls conducted for a consortium of media outlets. There was a separate exit poll in 2021 conducted by the Associated Press and Fox News. However, I was unable to obtain detailed crosstabs for the 2021 gubernatorial vote for the AP/Fox News Poll.