— Our final picks are coming Monday. In the meantime, our longstanding overall assessment — Democrats favored in House, Republicans bigger favorites in Senate — remains in place.

— Four ratings changes in the House. 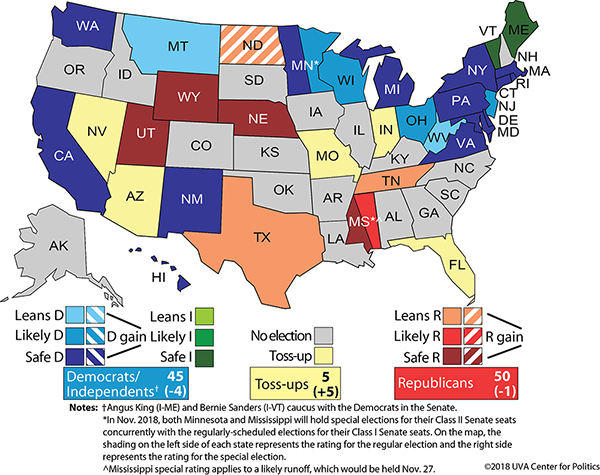 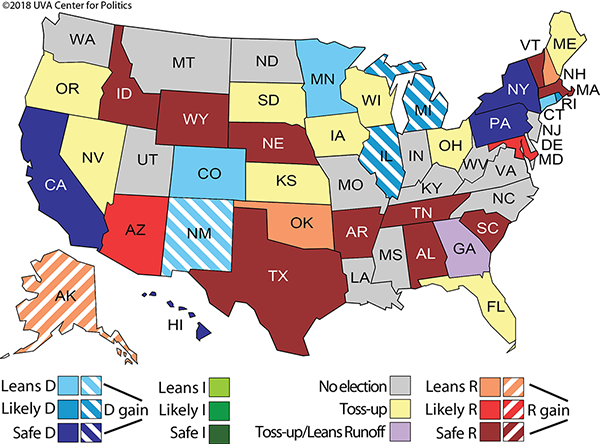 Where things stand less than a week out

We have great news for everyone. In just six days, the 2020 presidential campaign will begin!

(No, we’re really not kidding.)

But before then, we have the small matter of the 2018 midterm to settle. We’re still agonizing over our final picks in the closest House, Senate, and gubernatorial races. We will announce our final picks on Monday. That said, the direction of this midterm does not seem like it has changed much in the final days of the campaign. The Democrats remain in the lead for the House majority. The Republicans are even bigger favorites to retain control of the Senate. And Democrats will net governorships.

House: Right now, we have 212 House seats at least leaning to the Democrats, 202 at least leaning to the Republicans, and 21 Toss-ups. While we’re still gathering information about the Toss-ups, we do have a sense as to where we’re leaning in the races. As of this moment, we’d probably pick the Democrats in 12 of the Toss-ups and Republicans in nine of them. That would amount to a Democratic House gain of 29 seats. So let’s say, for now, we’re thinking an overall Democratic gain of somewhere around 30 seats, give or take. That’s more than the 23 net seats the Democrats need, but not so many more that one could rule out the Democrats sputtering out short of the majority.

One sign that points to the possibility of the GOP maintaining control is an old political science theory called “surge and decline,” which John R. Petrocik and Daron R. Shaw explore in a Crystal Ball piece this week. Historically, one of the factors that sets up the presidential party to lose House seats in the midterm is that they often overperform in the presidential year, winning a number of seats with the help of presidential coattails that they subsequently have trouble defending in the midterm. But Trump and the Republicans didn’t actually enjoy any surge in 2016: They lost six net House seats. If Republicans end up holding the House, keep that theory in mind as part of a post-election explanation.

Some real talk here: We’re going to pick all the House races, but we’re going to get many of them wrong. Many of these races are very close and could tip either way. Our overall goal is to get as close as possible to the overall net change.

Senate: Including the 65 Senate seats not on the ballot as obviously “safe” for the current incumbent party, our Senate ratings show 50 seats at least leaning Republican, 45 at least leaning Democratic, and five Toss-ups. Our current sense, subject to change, is that the Toss-ups might split three to two in either direction. If that happens, and our other ratings hold up, the Republicans would net one-to-two Senate seats.

Governors: Republicans currently hold 33 governorships, Democrats hold 16, and there’s one independent, Bill Walker of Alaska, who recently ended his bid for a second term. Including the 14 governorships not on the ballot as safe for the current incumbent party, our ratings show 22 governorships at least leaning Republican, 18 at least leaning Democratic, and 10 Toss-ups. Split the Toss-ups five to five, and Democrats would have 23 governorships, or a net gain of seven, and Republicans would have 27, a net loss of six (we currently have them favored in Alaska, which would be a gain for them but not a loss for Democrats).

We have a few House ratings tweaks this week before we make our picks on Monday.

The open CA-49 has always looked like the best of the Democratic pickup opportunities in the Golden State, given that it is an open seat and was the closest in 2016: retiring Rep. Darrell Issa (R, CA-49) only won by about half a point. Polls have shown attorney Mike Levin (D) up double digits on Diane Harkey (R), a member of the California State Board of Equalization. Additionally, Democrats seem to be in better shape to hold at least one of the two competitive, open seats they are defending in Nevada, NV-4. Both move from Leans Democratic to Likely Democratic.

Elsewhere in California, Rep. David Valadao (R, CA-21) has long appeared to be in a strong position to win reelection thanks to a strong local appeal even though Hillary Clinton won his Central Valley-based seat by about 15 points. In June, the top-two primary voting numbers were extremely encouraging for Valadao, 63%-37%; those results can be somewhat predictive for the fall. Yet outside groups from both sides are engaged in the district at the end, and even though Valadao remains clearly among the best-positioned Clinton-district Republicans, we’re moving the race from Likely Republican to Leans Republican.

Finally, we’re moving controversial Rep. Steve King (R, IA-4) from Likely Republican to Leans Republican. While the president won this district by 27 points in 2018, King, whose interactions with hateful white supremacists are becoming more frequent and more visible, received a recent rebuke from National Republican Congressional Committee Chairman Steve Stivers (R, OH-15), who tweeted “Congressman Steve King’s recent comments, actions, and retweets are completely inappropriate. We must stand up against white supremacy and hate in all forms, and I strongly condemn this behavior.” King does not seem to be taking his reelection campaign all that seriously, and J.D. Scholten (D), a paralegal and former professional baseball player, appears to be significantly pushing King.

We now have three Republicans in our Leans Republican column in what should be safe GOP seats: King, as well as Reps. Duncan Hunter (R, CA-50) and Chris Collins (R, NY-27), both of whom are running for reelection while under indictment. It is a real possibility that Democrats could score an upset in one or more of these seats, even though we doubt we will pick any of these upsets to actually happen in advance.