Skip to content
Home
/
Following the Money: What Outside Spending Tells Us About the Race for the House

— The spending decisions by big outside House groups can inform us about the most competitive House races.

— So far, outside groups have spent money in 57 House districts. The lion’s share of those districts that have seen spending are held by Democrats, indicating that Democrats are playing significantly more defense than Republicans.

— The vast majority of the districts we rate as the most competitive — those in the Toss-up or Leans categories — have seen at least some outside spending so far.

Outside House spending (so far)

We’re often asked how we formulate our race ratings. Of course polls are a part of it, but that can’t just be the only part of it — and it’s more our interpretation of the polls as opposed to what they exactly say. History and recent voter trends play a role too, as do the circumstances of individual races, be they judgments about the severity of a scandal, the importance of incumbency, or other things.

There’s also going with whatever the Magic 8 Ball says (just kidding). However, we’d be lying if we didn’t say that a bit of gut instinct was part of it too.

And then there’s money. Fundraising, particularly when one side has a lot and the other side has a little, can be telling. The parties talk most loudly through money — specifically, where they are spending it and where they are not.

Spending decisions can sometimes influence our ratings. An example came just last week, when the National Republican Congressional Committee’s decision to cancel its ad reservation in OH-9 contributed to our decision to move that race from Toss-up to Leans Democratic (we’ll address this more fully in our rating change section below).

Combined, the Democratic Congressional Campaign Committee and House Majority PAC (the 2 main Democratic outside House spending groups) spent about $230 million on independent expenditures in the 2020 campaign cycle, while the National Republican Congressional Committee and Congressional Leadership Fund (their GOP counterparts) spent about $225 million. This is on top of what the candidates themselves spend. (Because of longstanding federal law, candidates get better TV advertising rates than outside groups, meaning they get more bang for their buck.)

These 4 groups represent what is effectively the “Big 4” in House outside spending, although other groups spend considerable sums as well. (As a technical, legal matter, both the DCCC and NRCC have separate arms that actually make these independent expenditures.)

As of Wednesday, the combined total spent in the general election so far by the 2 big Republican groups is about $65 million, and the combined Democratic total is about $45 million. This is truly a snapshot in time — by the time you read this, there probably will be more reported spending.

Our source for the outside spending tracking is Rob Pyers of the nonpartisan California Target Book, and Rob is a must-follow on Twitter (@rpyers) for all sorts of useful political information. He has been tweeting out a list of outside spending reported to the Federal Election Commission — we used his update from Wednesday afternoon for this article.

The totals on both sides are going to get way larger by the time the election is over. Of more interest to us than the amount of money being spent is where the money is being spent, and how that aligns with our House ratings as well as our general understanding of the House battlefield.

Table 2 shows our updated House ratings — including this week’s changes — with races that have seen outside spending so far listed in bold. 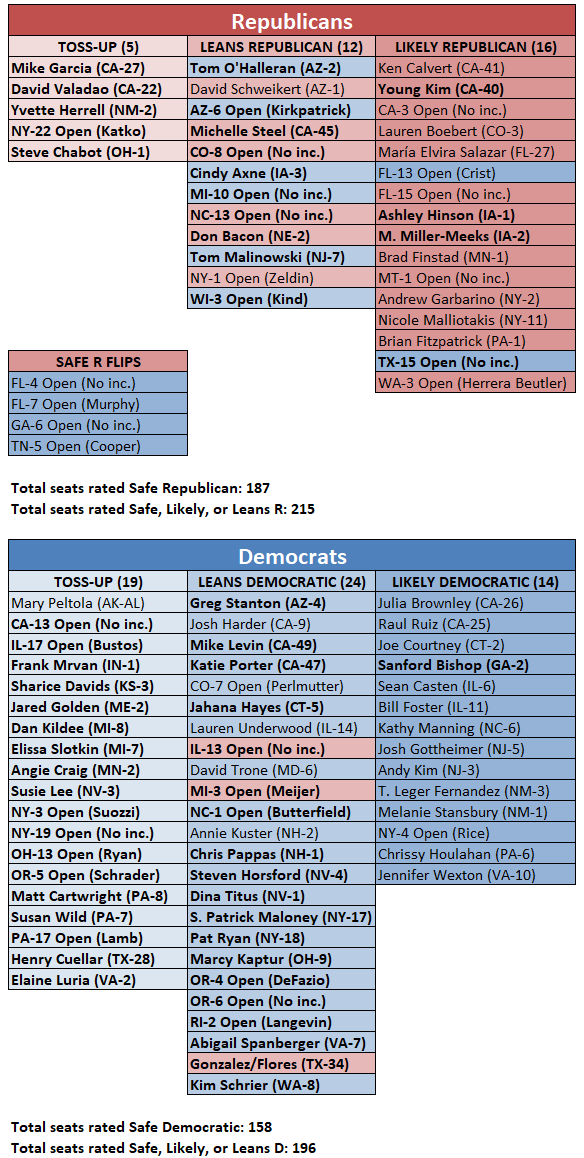 Note: Districts with outside spending so far noted in bold.

Note that the vast majority of the races that have seen such spending are rated in our most competitive categories: Toss-up or Leans. In fact, 23 of the 24 Toss-ups are in bold. The one exception is Alaska’s at-large district, which now-Rep. Mary Peltola (D) flipped in a special election decided a month ago by beating former vice presidential nominee Sarah Palin (R) in the state’s new top-4 ranked-choice voting system.

It may simply be that because the race is such a late addition to the competitive board, it has not attracted outside spending yet. No one would have thought to include Alaska in the big early television bookings outside groups made months ago — advance bookings that are now resulting in actual money being spent and actual ads being run.

If and when outside groups get involved in Alaska, they will have to craft their ad campaigns with the state’s unique election format in mind. It could be that the focus of ad wars would not be Peltola or Palin, but rather the other Republican candidate, Nick Begich. Begich likely would have beaten Peltola by several points had he advanced to the final round of the ranked-choice allocation instead of Palin, per @cinyc9 of the conservative elections site RRH Elections. It may be that Republicans have an incentive to boost Begich and Democrats an incentive to hurt him, but we’ll see if that actually materializes (and outside Republican groups may be leery of effectively taking sides against Palin). If it’s Peltola vs. Palin again in the final ranked-choice vote — and polling suggests that continues to be the likeliest outcome — Republicans will be in danger of coming up short in Alaska again.

But beyond the strange Alaska race, the other Toss-ups have all seen outside spending in the general election. The top race so far is MI-7, a Lansing-centered district where Rep. Elissa Slotkin (D) is facing state Sen. Tom Barrett (R); this is one of the most competitive districts in the country (Biden won it by less than a point), so it makes sense as a major magnet for outside spending.

We continue to believe that Republicans are favored to flip the House. One reason for that assessment comes in the outside spending: The districts attracting outside money are disproportionately controlled by Democrats, meaning that the Democrats are playing much more defense than Republicans are.

Of the 57 districts included on the outside spending list so far, 41 are held by Democrats and 13 are held by Republicans (we made a few judgment calls here on the incumbent party because of redistricting). A couple of other districts are not really held by either party: CO-8 and OR-6 were newly-added in reapportionment and neither has an incumbent running. And the final district, TX-34, features a general election between a couple of incumbents: Rep. Vicente Gonzalez (D), who currently holds TX-15 but opted to run in this much bluer district following redistricting, and Rep. Mayra Flores (R), who won the old, less blue version of TX-34 in a June special election following the resignation of former Rep. Filemon Vela (D). So a little more than 70% of the seats with outside spending are Democratic seats.

That indicates a battlefield in which Republicans are playing much more offense than Democrats, although at the moment the partisan disparity is not as lopsided as 2018. That year, 74 of the 85 races that attracted at least some outside spending from HMP/DCCC on the Democratic side and/or CLF/NRCC on the Republican side were Republican-held seats, according to a compilation from the liberal elections site Daily Kos Elections — an imbalance that presaged the big Democratic net gain that year. Last cycle was about even in terms of the breakdown of Democratic and Republican-controlled seats that saw spending.

Overall, 47 of the 57 districts that have seen outside party spending during the general election voted for Joe Biden in 2020. The presidential results in these districts range from AZ-2, which Donald Trump won by 8 points and Rep. Tom O’Halleran (D) is defending, to TX-34, the seat featuring the Gonzalez vs. Flores incumbent vs. incumbent race that Joe Biden carried by 15.5 points.

Anyway, there surely will be more seats that get added to this list and markedly more money spent. Overall, though, we think our ratings line up fairly well with the outside spending so far, and how the spending evolves likely will impact our ratings over the rest of the campaign.

We briefly mentioned one of our rating changes above: moving OH-9 from Toss-up to Leans Democratic. We actually announced this change on Twitter and on our Crystal Ball website last Thursday, but we wanted to explain it as part of today’s update.

The day before the NRCC cut its ad reservation in OH-9, a redrawn Trump +3 district based in Toledo held by long-serving Rep. Marcy Kaptur (D), the Associated Press reported that Air Force veteran J.R. Majewski (R) has misrepresented his military service: Majewski claimed that he had deployed to Afghanistan after the Sept. 11 terrorist attacks, but military documents inspected by the AP indicated that Majewski had “completed a six-month stint helping to load planes at an air base in Qatar, a longtime U.S. ally that is a safe distance from the fighting.” Majewski attacked the AP report but has yet to provide a persuasive rebuttal. Additional AP reporting yesterday also suggested that Majewski misrepresented why he was unable to re-enlist in the Air Force.

Majewski, a surprise primary winner who beat a couple of state lawmakers to claim the nomination, already seemed like a weak nominee, and the combination of the potentially damaging story with the NRCC ad cut pushed us to change the rating. It remains entirely possible that Majewski could win anyway — as noted above, candidates sometimes win without outside help, although Majewski has not demonstrated much fundraising strength. The astute Republican lobbyist Liam Donovan dryly noted in the wake of the Majewski fallout that the “race will set up an interesting poli sci experiment. Only so often do you get a pure look at the partisan baseline in a swing district absent any discernible resources.” Indeed, this district covers a lot of turf where Democrats have lost ground in recent years.

Other rating changes this week concern races more on the periphery of the competitive House map as opposed to those at the heart of the action.

We are moving a couple of Democratic-leaning open seats in Oregon, OR-4 and OR-6, from Likely Democratic to Leans Democratic. Democratic outside groups have intervened in both races, and we suspect that the state’s Toss-up 3-way gubernatorial race may be scrambling some of the usual partisan trends in the state — or at least might be making them harder to get a read on. Biden won each of the districts by about 13 points, making them certainly Democratic in nature but not necessarily unwinnable for the GOP if things shift more toward Republicans down the stretch. In 1996, Democrats claimed a 4-1 advantage in the state’s House delegation — none of those 5 seats have changed hands since. Oregon added a seat in the 2020 reapportionment, and Beaver State Democrats drew a House map intended to help them expand their edge to 5-1. But the open OR-5 is a Toss-up, and OR-4 and OR-6 are competitive as well.

We also are pushing a few heavily Democratic seats — the newly-drawn, open NC-14 in the Charlotte area, as well as the seats held by Reps. Jim Costa (D, CA-21) and Mikie Sherrill (D, NJ-11), from Likely Democratic to Safe Democratic. We may push more Democratic-held seats in that column to Safe as the cycle progresses: These are all roughly Biden +15-20 seats that would only be gettable for Republicans in a mega-wave, which it doesn’t seem like this election will be. But as noted above, Republicans continue to have plenty of offensive targets.