The Bafumi-Erikson-Wlezien team first applied our model in 2006 and were among the first to predict the return of the Democratic majority. That forecast was off by only two seats. Like most others, our model predicted a Republican takeover in 2010, underestimating the GOP swing by about 10 seats. In 2014 we overshot the Republican surge by just one seat. We now repeat our midterm forecasting exercise for 2018.

Based on information gathered in June, our forecast for 2018 is that the Democrats will gain seats in the House and most likely enough to retake control. The average of our simulations implies that they will win 221 seats to the Republicans’ 214, a slim majority. The predicted seat division may surprise given that we expect the Democrats to win the national vote by a substantial margin (53.6%-46.4% as a two-party share). The translation of votes into seats advantages the Republicans. This largely reflects gerrymandering, some of which is “natural” from the way Democrats and Republicans cluster geographically, and some of which results from redistricting following the 2010 census. There is a related incumbency advantage, though this has shrunk with the growing polarization, which nevertheless makes it difficult for the Democrats to make inroads in Republican-leaning districts.

Our forecast has two parts. First, using past elections as a guide, we model the national vote as a function of the generic ballot polls four-to-five months before the election, plus which party holds the presidency. Even early in the campaign year, generic ballot polls predict well once the president’s party is taken into account. Historically, the trend toward Election Day is for the out-party to make gains. Thus, we expect the Democrats to gain in the polls as the election approaches.

Second, using the most recent election (2016) as a guide, we model how the vote in individual seats varies as a function of the vote for the House and the president in the most recent election. Open seats and incumbent-contested seats are modeled separately. Using the 2016 equations, we substitute the expected national vote in 2018 for the national 2016 vote into the model.

Our simulations incorporate the uncertainty from our modeling. For each of our 3,000 simulations, we draw the national vote taking into account the error variance from our vote model. For each simulation, our congressional district predictions take into account the uncertainty from our modeling of the vote at the district level when the national vote is known. Our seat predictions are represented in Figure 1. There we can see slightly more blue than red, which means that the Democrats are more likely to win control of the U.S. House. Specifically, they have a 54% chance of regaining the majority. A Republican win is only a little less likely (46%) but notice that there is the possibility of a big Democratic win.

The forecast requires an important note of caution. It assumes in effect that parties apply their normal level of effort across all districts. The reports of Democratic enthusiasm about newly winnable races suggest that this assumption may not be correct. For that reason the forecast here may be best considered a lower bound of Democratic prospects. 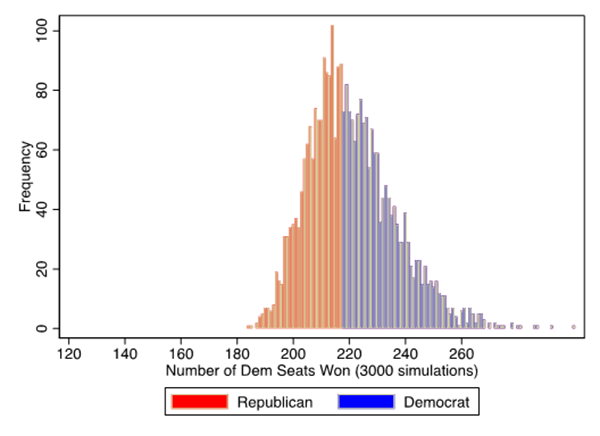