Democratic votes for state legislature haven’t translated into Democratic seats at a rate favorable to them of late. This is especially the case in key states like Wisconsin, Michigan, Ohio, Pennsylvania, North Carolina, and Florida.

Experts disagree on the extent, but part of the Democratic “seat translation problem” is because of Republican gerrymanders put in place after the 2010 elections when the Republicans took control of many state governments. As a result, the Democrats are focused on winning back these and other states in the hope of drawing district lines after the 2020 census.

The forecasts reported here are the only publicly made quantitatively based forecasts of state legislative races, which I also did in 2010 and 2014. They are at the district level, and so take the Democrats’ “seat translation problem” into account. Factors like incumbency, the prior vote in the district, and how many people nationally say they’ll vote for a Democrat in U.S. House elections are predictor variables.

What are the Democrats’ prospects in the key states mentioned above? Not particularly good, although the model says that both the Michigan state Senate and House are toss-ups.

The model also indicates the Democrats have a 47% chance of taking the North Carolina Senate. This is especially significant because court mandated re-redistricting for the 2018 elections has made the map there more favorable to the Democrats.

The Democrats also have about one-in-four chances of taking the Florida, North Carolina and Pennsylvania state houses. Aside from that, they appear to be shut out in Wisconsin and, not surprisingly, Ohio.

Other Democratic pick-ups around the country are expected in the Colorado, New Hampshire and Maine senates, with the Arizona Senate being a toss-up. The New Hampshire state house is also expected to flip blue, while the Arizona, Iowa, Minnesota, and West Virginia state houses are toss-ups.*

Overall, the Democrats are expected to pick up nine chambers, but many of these flips will be in small states. 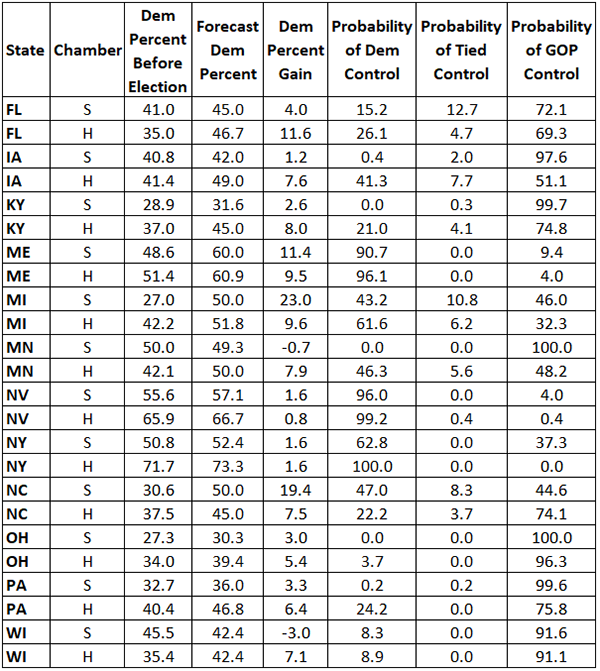 *Correction: A previous version of this story listed the Maine state house as a pickup opportunity for Democrats, but Democrats already control that chamber.