The memorable Republican victories of 1994 and 2010 are already linked as the two largest midterm landslides of the last half century. But one was not a duplicate of the other.

The GOP came out of this year’s election with more seats in the House of Representatives than they did 16 years ago, but short of the total the party amassed then in Senate seats and governorships. And while Republicans captured both the Senate and House in 1994, this year they won only the House.

Yet in each of the landslides they emerged with a clear majority of the nation’s governorships and scored healthy gains in state legislative races – both particularly important these days on the eve of the next round of congressional redistricting.

In short, while there are similarities between the two elections, there are also notable differences as well.

On the House side, Republicans gained a net of 52 seats in 1994, which lifted their total to 230. This year, they have already registered a net gain of 60 House seats, with several races to be decided.

As of Nov. 15, the GOP total of House seats in the 112th Congress stood at 239. That is already the highest number in Republican hands since the 80th Congress (1947-49), which was famously labeled during the 1948 campaign as the “do nothing 80th Congress” by President Harry Truman. Conversely, the present Democratic total of 190 House seats is the lowest House total for the party since the same point in the Truman presidency – a nadir that cannot be overcome even by favorable outcomes in the remaining undecided races.

On the Senate side, however, Republicans did not do as well this time as they did in 1994. Then, they gained eight seats on Election Night, a number that swelled to nine the following day when Sen. Richard Shelby switched his party affiliation to the winning side. That brought the GOP total to 53 seats. Republicans elected new senators in all regions of the country in 1994, including a pair in Tennessee, where Bill Frist (a future Senate majority leader) and Fred Thompson (a future presidential candidate) were both elected.

This year, the Republican Senate advance was capped at 47 seats, a pick up of six. The GOP easily ousted Sen. Blanche Lincoln in Arkansas, the only Democratic seat in the South up for grabs in 2010. And Republicans won five Democratic seats across the Frost Belt from Pennsylvania to North Dakota.

But they hit a Democratic “firewall” when they tried to push beyond the Great Plains. Democratic incumbents held on to vulnerable seats in California, Colorado, Washington and Nevada – the latter probably the most symbolically important of the group. There, Senate Majority Leader Harry Reid held off “Tea Party” favorite, Sharron Angle. For Democrats, it was a significant reversal of fortune from the pro-Republican election of 2004, when Senate Minority Leader Thomas Daschle was beaten for reelection in South Dakota.

Nor did the Republicans fare as well in gubernatorial contests this year as they had in 1994. They posted a net gain of 11 that election, bringing their total to 30. In 2010, the GOP has registered a gross pick up of 11 governorships, but their gains were partially offset by a Democratic comeback on the two coasts.

Governorships in Connecticut and Vermont shifted to the Democrats as did those in Hawaii and California, the nation’s most populous state. Democrats could pick up another governorship in Minnesota, where the race is headed to a recount with Democrat Mark Dayton leading by about 9,000 votes. In the meantime, the total of Republican governorships stands at 29, one short of the number they held after the 1994 election. 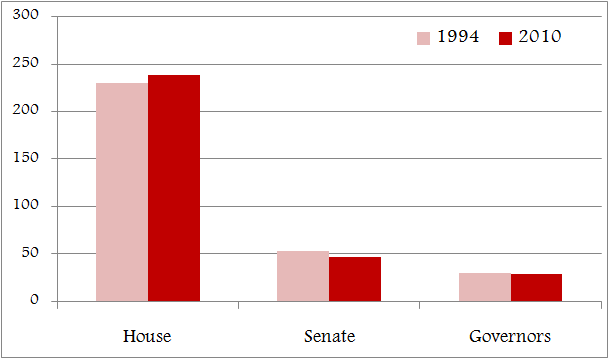 Note: All totals reflect the number of seats held by Republicans immediately before and immediately after the general election. GOP gains represent net totals (the number of Republican pick ups minus the number of Democratic pick ups) . An asterisk (*) indicates that the 2010 post-election total of GOP House seats and governorships is subject to small changes. As of Nov. 15, several House seats still remained undecided, as did the gubernatorial race in Minnesota. A pound sign (#) indicates that the 1994 post-election Republican Senate total includes the switch by Sen. Richard Shelby of Alabama from Democrat to Republican the day after the election. House pre-election totals include vacancies.

That brings us back to the House, where the Republicans made their greatest mark in 2010. This year’s GOP gains exceeded the party’s combined losses in 2006 and 2008, when the Democrats won – and then expanded – their briefly held House majority.

And the Republicans did it this year largely by ousting Democratic incumbents rather than by the traditionally easier route of capturing open seats. Roughly 50 Democratic incumbents were defeated in 2010, with about two-thirds of those serving in either their first or second term. In contrast, “only” 34 House Democrats were beaten in 1994, with the remainder of the Republican gains attained through the acquisition of open seats.

One major similarity with 1994 is that Republicans this election made more of their House gains in the South than any other region. But while the Democrats in 1994 went from holding a majority of Southern seats (85) to a respectable minority (64), this year they dropped to a total of roughly 40. Put another way, Democrats will hold less than 30% of House seats in the next Congress from a region that was once solidly Democratic.

Republicans also registered major congressional gains this election in the Midwest and the Northeast, the latter a region where their numbers in recent years have shrunk to a corporal’s guard. They picked up five seats in the battleground states of Ohio and Pennsylvania, at least five seats in New York (where two races are still undecided), four seats in President Barack Obama’s home state of Illinois (including that of Democratic Rep. Melissa Bean, who conceded her race Nov. 16), and two seats in New Hampshire – ending the GOP’s brief shut out in New England.

The party also reclaimed lost ground in the normally Republican terrain of the Plains states and the Mountain West, where they picked up 10 House seats. But the GOP ran into a roadblock in the Pacific West, where a pro-Democratic status quo largely prevailed. That was a far cry from 1994, when Republicans ousted five Democratic incumbents in Washington state alone, among them House Speaker Thomas Foley.

The question now is what kind of House majority have Republicans constructed. Is it built to last a dozen years, like the one that emerged in 1994, or will it be short-lived like the recent Democratic majority? The betting window is now open.

Chart 2. Comparing GOP Landslides: Where They Gained Their House Seats 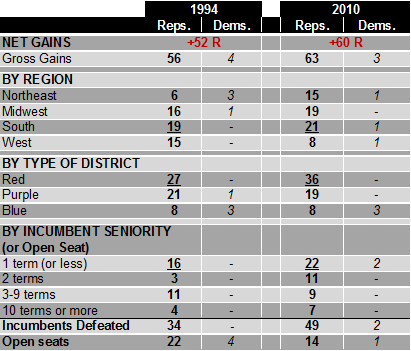 Note: The Republican House numbers for 2010 are as Nov. 16, at which time several contests still remained undecided. In the first section of the chart, the following states comprise each region:

Sources: Congressional Quarterly Weekly Report, Nov. 12 and Nov. 19, 1994, for 1994 data; www.swingstateproject.com for the 2004 and 2008 presidential vote by district; Politics in America (CQ Press) for the number of terms served by defeated Democratic incumbents in both 1994 and 2010.