In his recently published autobiography, This is Herman Cain! My Journey to the White House, the Republican presidential candidate details at length his “up by the bootstraps” life history, from his business successes and bout with cancer to the early stages of his 2012 presidential campaign.

Barely mentioned was his hardly noticed try for the 2000 Republican presidential nomination, which began and ended before the primaries began, and his more consequential bid for the Republican Senate nomination in Georgia in 2004.

In the latter race, Cain ran against a pair of white Atlanta-area congressmen. He finished ahead of one (Mac Collins) and trailed the other (Johnny Isakson). In the process, Cain showed that he had the political skills needed to win votes in a party where few African-Americans are primary participants.

From the beginning, the race for retiring Democrat Zell Miller’s open Senate seat was considered Isakson’s to lose. He was well financed, was a known commodity from nearly 30 years in Georgia politics, and boasted a base in the vote-rich Republican suburbs north of Atlanta. The lone question was whether Isakson could be held below 50% in the primary and forced into a runoff with either Collins or Cain.

In spite of his business experience, which included a long stint as CEO of Godfather’s Pizza, Cain began the campaign as a virtual unknown. But he steadily gained ground through a combination of charisma, ideology and compelling life story. To Tom Baxter, the editor of the Southern Political Report, he was “a business candidate on steroids… a skilled pitchman,” who was able to connect with many conservative white voters.

In part, that connection was due to his passion; and, in part, to his conservative ideology: “If you want to define ‘conservative,'” Cain would tell voters, “I’ll spell it for you: C-A-I-N.”

The candidate advocated restructuring Social Security with optional personal retirement accounts and replacing the federal tax code with a national sales tax dubbed the “fair tax.” It was a forerunner of his current “9-9-9” plan, which calls for a 9% tax on individual income, a 9% tax on corporate income and a 9% national sales tax.

But the prime issue in the Republican Senate primary was abortion, with Cain and Collins both arguing that Isakson was too moderate on the issue. The latter was considered a “three exception” candidate, who would permit abortions in the case of rape, incest or the health of the mother. Cain and Collins allowed only one exception, for the health of the mother, and won a dual endorsement from Georgia Right to Life.

“I believe in life from inception,” Cain declared in one ad. “Johnny’s voted pro-abortion 14 times.” However, the issue failed to derail Isakson’s campaign as it did in a GOP Senate primary eight years earlier. Against the attacks from Cain and Collins, Isakson emphasized his “respect for life” and proved acceptable to most Republican primary voters on a host of other issues.

Cain did not have as much money as Isakson, but he raised more than Collins. By the end of June 2004, three weeks before the primary, Cain had collected nearly $3 million, including a loan of more than $750,000 to his campaign.

It was enough money for Cain to make his case, and on Primary Day he finished second with 26% of the vote. Isakson, though, drew 53% and won the Republican Senate nomination without the need of a runoff.

A look at Herman Cain’s 2004 primary vote in a selected sampling of Georgia counties: 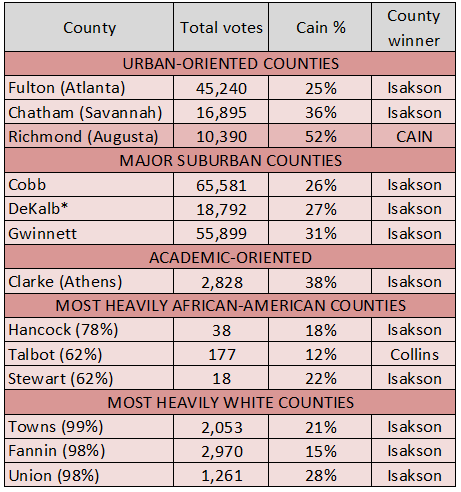 Note: Racial percentages are based on the 2000 census. An asterisk (*) indicates that DeKalb County has a majority African-American population.

Cain’s basic problem was that, unlike his rivals, he did not have a geographical beachhead to build on. Of Georgia’s 159 counties, Cain carried just five. Four of them — Grady, Jefferson, Taliaferro and Wheeler — were small, rural counties south and east of Atlanta. The fifth was Richmond County, which includes the city of Augusta.

Yet Cain rolled up a respectable share of the vote in a wide variety of places, drawing 31% in the fast-growing suburbs of Gwinnett County, 36% in Chatham County (which includes the city of Savannah), 38% in academic-oriented Clarke County (the home of the University of Georgia at Athens) and 46% in Columbia County (a suburban county outside Augusta).

The issue of race did not appear to be a significant factor in the primary outcome. There was no evidence of a massive influx of African Americans into the Republican primary to support Cain, nor was there any sign that the color of his skin repelled conservative white voters. “They’re not racist,” said one-time Georgia Republican Chairman Rusty Paul in describing rural voters south of Atlanta. “They’re driven by ideology, and Herman Cain has proven to them that he’s got the ideology.”

Cain agreed. In his autobiography, he noted that “even though there were very few black Republicans in most of Georgia’s 159 counties, when people listened to my message, it was not about the color of my skin.”

Cain’s decent primary showing left him as a figure to watch in Georgia Republican politics. “Running for the U.S. Senate was a bit audacious,” says University of Georgia political scientist Charles Bullock. But he “impressed people” both in the way he talked and in the size of his vote, and he was seen as a “potential up and comer” in Georgia politics.

As for Cain, he may have been envisioning even broader horizons when he addressed his supporters on primary night in July 2004. “We may not have won the most votes, but we did not lose,” he declared. “I’ll be back.”

Note: The number of primaries won by a particular candidate includes the District of Columbia. Democrat Shirley Chisholm won a non-binding, “beauty contest” primary in New Jersey in 1972.