— The looming Georgia Senate runoff is both the final race of 2022 and the first race of 2024, a Senate cycle in which Democrats are playing a lot of defense.

— The Democrats could run the Senate more smoothly if they can get a “real” majority of 51.

— But the primary importance of the runoff is electoral: Democrats could really use an extra buffer seat as they try to hang on in a couple of years.

Democrats clinching at least a 50-50 Senate majority over the weekend seemed to take the steam out of the looming Georgia Senate runoff. But that race remains vitally important — not just as the last race of 2022, but as the first race of 2024.

First of all, there are governing consequences for Democrats if they can get a true majority.

In a 50-50 Senate, the parties have equal representation on committees, based on a power-sharing agreement that the 2 parties reached early in the current Congress. An extra seat for Democrats would render such an agreement unnecessary and would give Democrats the advantage on committees. It also would make it easier for Democrats to confirm judicial nominees if they had an actual majority, because there are logistical challenges the party must surmount in a 50-50 Senate that would not exist in a 51-49 Senate. A big part of modern Senate majorities is simply keeping the judicial confirmation conveyor belt running at full speed: An extra Democratic senator would improve efficiency in that regard.

A 51-seat Senate majority would also allow Senate Democrats to occasionally bypass their few members who are not always team players, most notably Sens. Joe Manchin (D-WV) and Kyrsten Sinema (D-AZ). However, this is probably less important in the new Congress as opposed to the current one because the likely Republican takeover of the House means that the GOP will have a seat at the governing table — meaning that the kind of legislation Democrats would want to try to get through the Senate is not likely to pass the House anyway. There is also the filibuster, but eliminating it next year would not make any sense because Republicans control the House — even if Democrats had the votes to do so in a 51-49 Senate, which they likely would not.

One other thing: A 50-50 Democratic Senate majority means that they are but one death or resignation away from losing the majority. A 51-49 edge gives the party a buffer on that as well.

But the more important buffer, for Democrats, is electoral.

In saving at least the tiniest of Senate majorities, Democrats completed the first step of a tricky 2-cycle challenge. It very well may not be enough to save them from eventually losing the Senate next cycle, but it does give them another 2 years of control and at least a fighting chance in 2024. But that fighting chance may be predicated on what happens on Dec. 6, when Sen. Raphael Warnock (D-GA) and former NFL star Herschel Walker (R) face off for a second time. This is a race we leaned to the Republicans prior to Election Day, but we are now characterizing it as a Toss-up.

Before last week’s election, we noted how challenging the 2024 Senate map is for Democrats. Let’s take another look at it. 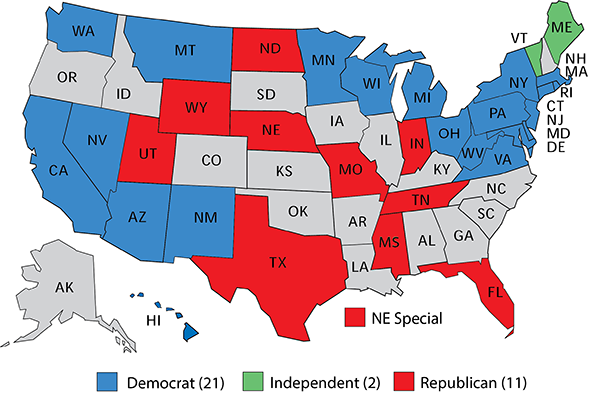 The next election is a presidential year. In the last 2 presidential cycles, only a single senator — Susan Collins (R-ME) — overcame her state’s presidential partisanship to win. In every other race, the same party that won the state for president also won the Senate race.

Unless Democrats win the presidential race in a blowout — something that seems unlikely in our closely-divided nation — the Republican presidential nominee seems very likely to carry at least 3 states that have Democratic senators up for reelection in 2024: Montana, Ohio, and West Virginia. That puts Sens. Jon Tester (D-MT), Sherrod Brown (D-OH), and Manchin at a disadvantage. We’re not sure if we would start any of them as clear underdogs in ratings, but at best they would all start in Toss-up races.

Beyond that, Sens. Sinema, Debbie Stabenow (D-MI), Jacky Rosen (D-NV), Bob Casey (D-PA), and Tammy Baldwin (D-WI) are all up as well. Their states all voted for Joe Biden in 2020, but by less than his overall national margin (about 4.5 points). A successful Republican presidential nominee would end up carrying at least some of these states, perhaps giving Republicans an opportunity to flip seats from this group as well. Sinema’s race, in particular, could be in flux, as she appears likely to face a credible primary challenge given her tendency to buck her party. Democrats did have varying degrees of success in all of these states last week — but, remember, midterm results typically don’t have much predictive value for presidential cycles.

The Republican nominee, meanwhile, should carry all of the states that Republican senators are defending next cycle, including the 2 most competitive states among them, Florida and Texas.

Overall, Democrats are defending 23 seats in 2024 (including Maine and Vermont, held by independents who caucus with Democrats), while Republicans are defending just 11. That includes the likely November 2024 special election in Nebraska after Sen. Ben Sasse (R-NE) resigns to become president of the University of Florida. We’ve included that race in Map 1.

You can now see the vital importance of whether Democrats are just at 50 seats, or whether they are at 51. Even given the Republicans’ re-emerging problem of nominating weak candidates in winnable races — a problem that bedeviled the party in 2010, 2012, and, it must be said, 2022 — you’d think, at a bare minimum, Republicans should be able to flip at least a single seat next cycle. That would be all it would take to win the Senate if they flip Georgia next month. But if Warnock holds, the Republicans will need 2 flips to win the Senate. Just based on the map itself, that seems likelier than not, but it’s harder to just pencil it in as happening. Democrats did better than expected last week, and despite a very tough map, maybe they’ll do so again.

Had Republicans won the Senate this year, there would have been essentially no path to Democrats taking the majority back in 2024, given what we’ve just laid out. In fact, had Republicans maximized their gains this year and gotten to 53 or even 54 Senate seats, it’s possible that they could have even approached a 60-seat, filibuster-proof majority had they then performed well in 2024. This is something that some of the sharper minds on the Democratic side, such as data analyst David Shor, were warning about after the 2020 election.

But Republicans blew that opportunity in 2022.

However, they still have a chance to give themselves an even clearer path to the majority in 2024. That opportunity comes in a few weeks.