The national numbers indicate that Republicans should be on the verge of big House gains. But a district-by-district analysis suggests a different story.

Throughout the election cycle, we’ve been closely monitoring the House generic ballot, which is the national poll that asks whether voters would support a Republican or a Democrat in their local House race. For much of the year, the polls have been roughly tied. Those were generally polls of registered voters — a bigger universe of people than the “likely voters” now being tested. With that polling adjustment now in place, Republicans have taken a clear lead in the House generic ballot, though perhaps not as big of a lead as they held at this point in 2010, when they netted 63 House seats and took control of the House.

Table 1 shows the results of five recently released generic ballot surveys from high-quality, nonpartisan pollsters, as well as results from those same pollsters roughly this time four years ago. 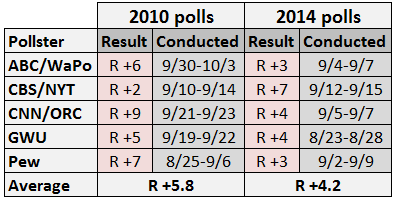 This is an imperfect comparison: While the pollsters used are the same, the timing of the surveys does not line up perfectly (we used the most recent survey from these pollsters conducted this year and tried to find the poll from four years ago conducted closest to this point in the election year). However, the Republicans held an average lead on the generic ballot of about 5.8 percentage points in these polls, whereas the same surveys now show an average lead of 4.2 points. That’s good for Republicans, but not quite as good as 2010.

In comparing the overall average (including other polls not included in Table 1), the RealClearPolitics generic ballot average on Sept. 24, 2010 (four years ago as of this writing) showed a Republican lead of 3.7 points. The current average, as of Wednesday afternoon, shows Republicans with a 4.0-point lead. So depending on how one slices the numbers, one could argue that, based on this metric, Republicans are in slightly better shape in the battle for the House than they were four years ago.

Or one could argue that they are not doing as well. For instance, another polling average — HuffPost Pollster — shows Republicans with only a one-point lead on the generic ballot, a couple points less than its average showed at this time in 2010.

So pick your poison. The larger point is that the generic ballot, and how it moves from now until Election Day, might not tell us much more than what we already know about the U.S. House picture. Here’s why:

For the sake of argument, let’s assume that Republicans continue to gain in the generic ballot average so that they reach a national House polling lead of 9.4 points (the Election Day generic average on RealClearPolitics in 2010) or 7.7 points (HuffPost Pollster). And let’s also assume that, on Election Day, Republican House candidates win the overall national House vote — the total number of votes cast in House elections for either party — by 6.8 points, matching their 2010 performance.

That performance produced a House with 242 Republican members. At present, Republicans control 234 seats (assuming all vacancies are filled by the party of the previous occupant of the seat).

So it’s possible that a 2010-style domination of the House vote would only result in something like an eight-seat gain for Republicans.

The GOP is already at close to a high-water mark in the House, and their list of truly appetizing targets is limited. Meanwhile, Democrats do not have nearly the broad playing field they had to defend in 2010, and their national third-party groups, like the Democratic Congressional Campaign Committee and House Majority PAC (the shadow DCCC), have a distinct dollar edge over their GOP rivals. That doesn’t mean the Democrats can overcome a poor national environment and capture the House — or even net a seat or two — but it does mean that the Democrats are decently positioned to limit their losses even if the national environment gets worse.

This is why Republican advances in the generic ballot are not enough, by themselves, to alter our longstanding outlook for change in the House: A net Republican gain of five to eight seats.

In order to change our overall outlook and increase the expected Republican gain, we’re going to have to see more movement toward the GOP in individual House races. There’s some of that, but not enough to suggest a double-digit Republican addition.

We’re making 14 changes to our House ratings this week: 10 in favor of Republicans, and four in favor of Democrats. Overall, these changes represent some slight movement toward the Republicans and also a slight narrowing of an already narrow House playing field.

The number of seats not rated Safe for one party or the other decreases from 62 to 59 (out of 435), and the number of truly competitive seats — those rated Toss-up or Leans Democratic or Republican — also decreases, going from 38 to 34. This makes sense on a House map where there are not that many obvious targets for either party: Just 17 Republicans represent districts won by President Obama in 2012, and nine Democrats hold seats won by Mitt Romney in 2012. These outliers, which make for the best House targets, are few and far between. And even then, they are by no means guaranteed to flip. 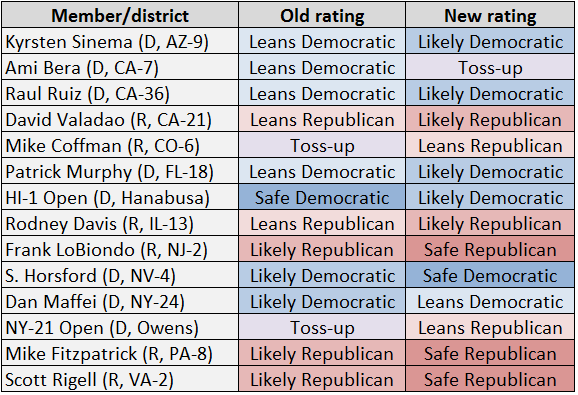 One of the 17 Republicans in an Obama seat is Rep. Mike Coffman (R, CO-6), who has spent almost the entire cycle locked in a Toss-up race with Andrew Romanoff (D), a former speaker of the state House of Representatives who unsuccessfully challenged Sen. Michael Bennet (D-CO) in a 2010 primary. Both sides are heavily invested here, and it should be a hot race until Election Day. But Republicans are expressing a bit more confidence in this race than Democrats, and in a state where Democratic Senate and gubernatorial incumbents are locked in close races, it’s a good year to be a GOP incumbent even in a swing seat. Coffman is positioned to squeak by, and we’re moving his race from Toss-up to Leans Republican.

Meanwhile, it shouldn’t be surprising that in what is shaping up to be a Republican year nationally many Democratic challenges have sputtered. Reps. David Valadao (R, CA-21) and Rodney Davis (R, IL-13) ranked among the top Democratic targets in the country earlier in the cycle, but neither race has really materialized, and both go from Leans Republican to Likely Republican. The same can be said for three longer-shot Democratic targets: Reps. Frank LoBiondo (R, NJ-2), Mike Fitzpatrick (R, PA-8), and Scott Rigell (R, VA-2) occupy the kinds of politically competitive districts that Democrats need to win in order to grab a majority, but this isn’t a good year to convince voters in these places to swap out their moderate GOP incumbents for Democrats. This trio of seats moves from Likely Republican to Safe Republican. Assuming there isn’t an upset in any of these seats this year, Democrats will revisit all five in what could be a more favorable climate in 2016.

That said, some top GOP targets from earlier this year also don’t look quite as endangered now: Reps. Kyrsten Sinema (D, AZ-9), Raul Ruiz (D, CA-36), and Patrick Murphy (D, FL-18). The Republican challengers to these first-term incumbents have not really panned out, and all three have relatively noteworthy feathers in their caps: Murphy and Sinema won the backing of the U.S. Chamber of Commerce, which endorses Republicans almost exclusively in federal races, and Ruiz, an emergency room physician, won immensely positive local media coverage by helping passengers with medical problems on flights on two separate occasions over the past year. All three races go from Leans Democratic to Likely Democratic. Moving even further off the board for Republicans — just read this to learn why — is the seat of Rep. Steven Horsford (D, NV-4), who goes from Likely Democratic to Safe Democratic.

The remainder of our rating changes are all Democratic-held seats moving toward the GOP.

In New York’s North Country, the retirement of Rep. Bill Owens (D, NY-21) left the Democrats in a bind in a district that is trending Democratic but is ancestrally Republican. Elise Stefanik, a Republican operative-turned-candidate, appears to have a leg up here against a nontraditional Democratic candidate, filmmaker Aaron Woolf, who may be having some trouble unifying his base: A Siena College poll showed Stefanik up 46% to 33% on Woolf, with a Green Party candidate at 10%. This race goes from Toss-up to Leans Republican. Another non-New York City Empire State seat, that of Rep. Dan Maffei (D, NY-24), is fairly Democratic (57% Obama in 2012), but Maffei fell in the 2010 wave before regaining his seat in 2012 and both party’s national congressional committees are spending here. John Katko (R), a former federal prosecutor, is still an underdog, but this race is very much in play: A Siena College poll showed Maffei up 50%-42%. So NY-24 is now just Leans, not Likely, Democratic.

Across the country in suburban Sacramento, first-term Rep. Ami Bera (D, CA-7) is locked in a tight contest with former Rep. Doug Ose (R), a favorite of establishment Republicans who advanced to the general election over less electable Republican foes. This is a race where, as is oftentimes the case, both Democrats and Republicans argue they have a small lead. We’re not sure who is right, so we’re moving the race from Leans Democratic to Toss-up.

Finally, watch out for a potential surprise in Hawaii: Ex-Rep. Charles Djou (R, HI-1) is trying to get his old seat back against state Rep. Mark Takai (D), and despite this being a very Democratic district — home-state favorite Barack Obama won 70% here in 2012 — Djou is a strong candidate: He briefly held the district in 2010 thanks to a Democratic split in a special election, and he ran well against the current occupant, Rep. Colleen Hanabusa (D), winning 47% and 45% of the vote against her in, respectively, 2010 and 2012 (Hanabusa is vacating the seat after her unsuccessful challenge to Sen. Brian Schatz in a Democratic primary earlier this year). A Honolulu Civil Beat poll showed Djou up four points, and this race belongs on our board even if we remain skeptical that this heavily Democratic district will ultimately back a Republican: HI-1 goes from Safe Democratic to Likely Democratic.

We talked to senior Democrats and Republicans involved in the House contests to inform this report, as well as some of our fellow analysts and journalists (all were given anonymity so they could speak freely). We asked each source to give his or her best guess as to what the net change in House seats would be on Election Day. The guesses were generally in the range of a five-to-eight seat GOP net gain — the same as ours — with a low guess of Republicans adding two seats to a high guess of Republicans adding nine.

If the result is somewhere in that range — around a five-seat Republican gain — it’s highly probable both sides will declare victory and move on to 2016. Republicans will have added to their House majority and largely won back the seats they lost in 2012 (they lost a net of eight seats). Democrats, meanwhile, will have held the line in tough conditions with a better-turnout presidential contest on the horizon. Of course, the difference is that the GOP will actually have won, while the Democrats will have “won” relative to the disastrous (for them) wave of 2010.

Still, sources on both sides said, such a modest change in seats would be at least somewhat frustrating: All the money, time, and effort for this?

Such is the trench warfare that defines 2014’s battle for the U.S. House. 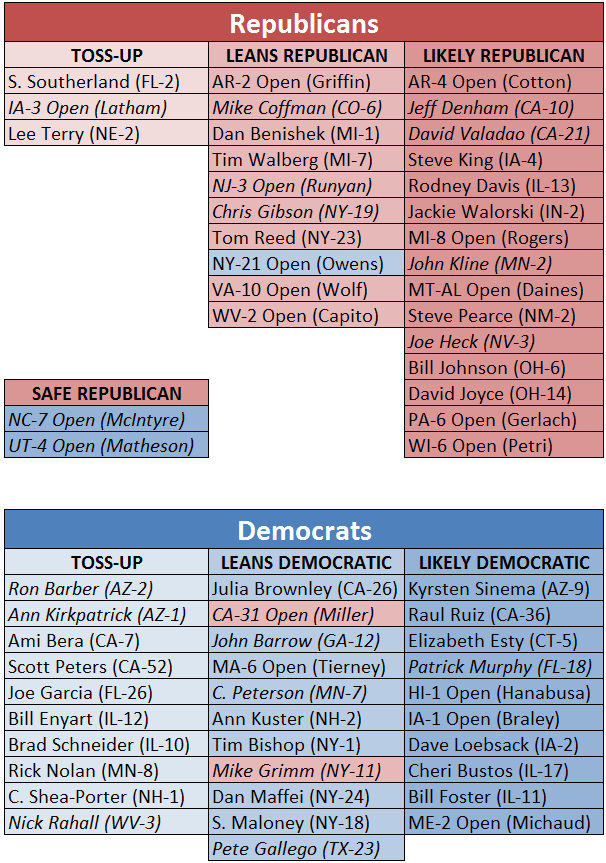