We are making 17 changes to our U.S. House ratings this week. On the surface, all that movement suggests that there is a lot going on in the battle for the House. Actually, though, the overall House picture remains largely where it has been for months: on hold until the presidential race gets sorted out.

Neither party’s House campaign committee can control what happens in their respective nominating contests: either might end up with nominees who help or hurt down the ballot. Or the election could be closely contested between two equally strong — or weak — candidates, creating a relatively neutral political environment.

For the purposes of our ratings, we’re assuming the third scenario — a close national election where neither presidential candidate exerts excessive influence on other races.

As it stands right now, Democrats are poised to gain a small number of seats, probably somewhere between five and 10. Part of this is just a correction to the big, overextended Republican majority. Republicans won a few seats in 2014 that they really don’t have much business holding. Additionally, court-ordered redistricting in Florida and Virginia created more favorable maps for Democrats, which should allow them to pick up a few extra seats.*

However, Democrats need to net 30 seats to win back the majority, so this projection suggests the Republicans are in very good shape to win control of the House for the fourth straight election. Again, the presidential race could scramble this. The Democrats’ chances of retaking the House are tiny, but we’ll keep the window cracked open in case of extraordinary circumstances. 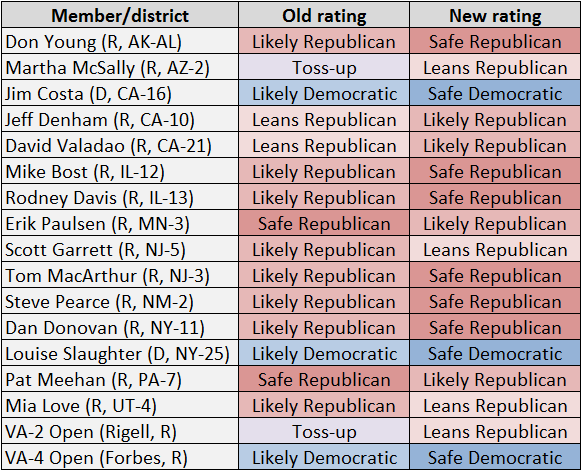 The best news for Republicans on this list is that two current Toss-ups move to Leans Republican.

While Rep. Martha McSally (R, AZ-2) represents one of the most competitive districts in the country — this is former Rep. Gabrielle Giffords’ (D) old seat, and McSally narrowly lost to ex-Rep. Ron Barber (D) in 2012 before narrowly winning it in 2014 — she has raised an eye-popping amount of money, with nearly $2 million cash on hand as of the last report. Democrats appear headed for competitive primary, and it’s so late (Aug. 30) that it’ll be hard for the eventual nominee to gain traction. While Democrats might be hurt by the late primary in this district, it might help them in AZ-1. Former Republican state legislator Tom O’Halleran (D) has an open road to the Democratic nomination in that open seat, while Republicans have a big, jumbled field. This same dynamic — a late, divisive Republican primary — helped Rep. Ann Kirkpatrick (D, AZ-1) hold on in 2014. Kirkpatrick is now running for Senate.

After redistricting changed his district from one Mitt Romney narrowly won in 2012 to one where President Obama got 61%, Rep. Randy Forbes (R, VA-4) found himself in a tough spot. However, the retirement of Rep. Scott Rigell (R, VA-2) in a swingy but now-Republican-leaning Hampton Roads seat gave Forbes a place to credibly run for reelection. Forbes will have to win a primary, and Democrats may produce a credible opponent, but Forbes starts as the favorite. His seniority on the House Armed Services Committee can only help him in a district with a big military presence and a lot of veterans. With Forbes out of the picture in VA-4, though, that seat moves from Likely Democratic to Safe Democratic.

Six members go from Likely Republican to Safe Republican: Reps. Don Young (R, AK-AL), Mike Bost (R, IL-12), Rodney Davis (R, IL-13), Tom MacArthur (R, NJ-3), Steve Pearce (R, NM-2), and Dan Donovan (R, NY-11) all appear to have easy paths to reelection. Bost and Davis occupy downstate Illinois seats that are competitive on paper, but the region is trending Republican and neither drew a strong challenger (the state’s filing deadline was Nov. 30, 2015). MacArthur and Donovan are both in their first terms and both represent seats that Obama won in 2012, but, again, neither has drawn strong challengers and national Democrats appear to be prioritizing other races. The fact that both are in expensive media markets — Donovan’s Staten Island seat is part of the New York City media market while MacArthur’s is covered by Philadelphia and New York City — also helps the incumbents because it would be very expensive to successfully wage a television ad war against them. MacArthur’s immense personal wealth also helps him in particular, as does Donovan’s strong reputation on Staten Island dating back to his time as Richmond County’s district attorney. Young and Pearce occupy Republican-leaning districts and have not drawn credible challengers.

Moving onto the Likely Republican list from Safe Republican are Reps. Erik Paulsen (R, MN-3) and Pat Meehan (R, PA-7). Both represent the kind of politically balanced suburban districts that are of growing importance to Democrats as some of the traditionally Democratic rural districts they used to hold become increasingly Republican. Paulsen and Meehan should be fine, but if Democrats do end up making a serious play for the House, they hold the kind of districts that might become competitive.

Meanwhile, two members who had surprisingly close calls in 2014 — Reps. Jim Costa (D, CA-16) and Louise Slaughter (D, NY-25) — appear to be taking their races more seriously this cycle, and presidential-level turnout will help them in their districts. Obama won 59% of the vote in both in 2012, and Republicans don’t hold any districts where he did so well. Both go from Likely Democratic to Safe Democratic.

Speaking of California, Reps. Jeff Denham (R, CA-10) and David Valadao (R, CA-21) will be perpetual Democratic targets so long as they hold their seats, both of which Obama won in 2012. However, both won in 2012, and each of them has well-stocked coffers while their potential Democratic opponents have much to prove. So we’re moving both seats from Leans Republican to Likely Republican for now.

Two incumbents Democrats might have better luck challenging are Reps. Scott Garrett (R, NJ-5) and Mia Love (R, UT-4). Garrett’s typically reliable Wall Street fundraising is drying up over his social conservatism: He is a vocal same-sex marriage opponent who made national news for criticizing the National Republican Congressional Committee for supporting gay candidates. His likely opponent, former Bill Clinton speechwriter and Microsoft executive Josh Gottheimer (D), has raised impressive sums of money. This is still a Republican-leaning district but it could be a very competitive race. Love, who surprisingly lost to former Rep. Jim Matheson (D) despite Mitt Romney’s coattails in 2012, only narrowly defeated Doug Owens (D) in 2014. Owens is running again and actually outraised Love in the most recent fundraising quarter. Both move from Likely Republican to Leans Republican.

Table 2 shows all of the seats we list as at least potentially competitive. 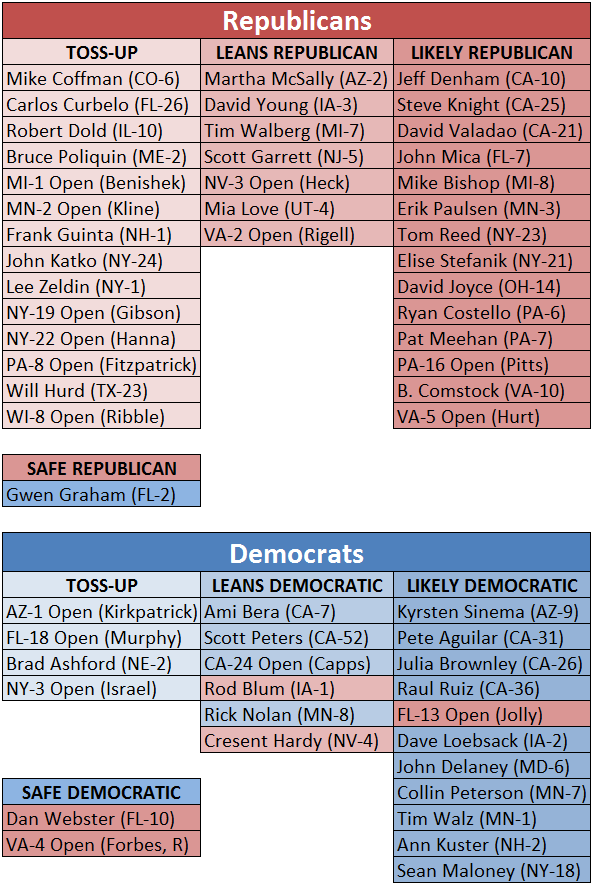 Note: Districts are shaded by the color of the party that currently holds them, red for Republican and blue for Democratic.

Overall, Republicans have 208 Safe seats, and Democrats have 171. That’s 379 of 435 total seats (87%) that we call safe for one party or the other. More broadly, there are 229 seats that are Safe/Likely/Leaning Republican, 188 Safe/Likely/Leaning Democratic, and 18 Toss-ups. The current House is 247-188 Republican, assuming Republicans win a special election to fill the seat of former House Speaker John Boehner (R, OH-8). Splitting the Toss-ups down the middle would result in a 238-197 Republican-controlled House, or a gain of nine seats for the Democrats, which would be on the high end of our current estimate, a five-to-10 seat Democratic gain.

* A recent court ruling could force North Carolina to change its House map, which is a pro-Republican gerrymander. However, smart commentators like Rick Hasen of the Election Law Blog and the Daily Kos Elections team are skeptical that any potential changes will lead to Democratic gains.