The most fundamental difference between presidential and midterm cycles is that far fewer voters participate when there is no presidential contest. According to available data, the last time midterm turnout exceeded the previous presidential election was in 1838, when 70.8% of the eligible population voted versus the 56.5% who voted in the 1836 presidential election. Ever since, presidential turnout has always exceeded midterm turnout. Since the 26th Amendment to the Constitution expanded the franchise to all eligible citizens 18 years or older, 1994-1996 was the closest midterm turnout has been to presidential turnout — 41.1% of the voting-eligible population (VEP) cast ballots in the 1994 midterm and just 51.7% of the VEP voted in the 1996 presidential contest. Chart 1 and Table 1 lay out the substantial differences in turnout that depend on whether or not the presidency is on the ballot. 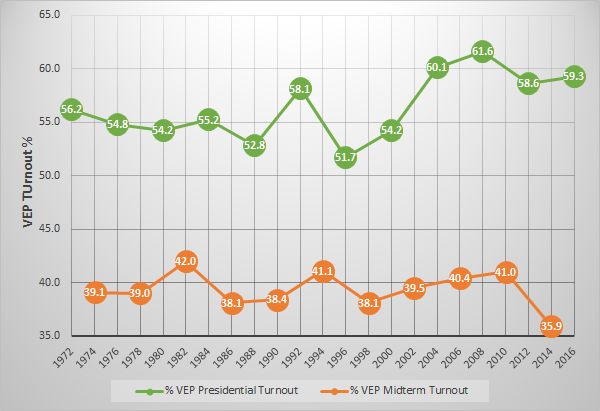 2. The midterm electorate is more educated

With lower overall turnout in midterm elections, groups that are more likely to vote thus exude a larger influence on the outcome. One demographic trait that is highly correlated with turnout is education, though there is debate over a causal linkage between higher education levels and higher voting rates. Chart 2 lays out exit poll data going back to the 2004 presidential election. The midterm election that followed each presidential cycle had a larger share of voters who said they were college graduates. And in the ensuing presidential election, the electorate had a slight decrease in the percentage of college graduates. This pattern endured even as the college-educated share of the population grew.

It is worth noting that exit polls may overstate the education level of the electorate, as the New York Times’ Nate Cohn has argued using other, non-exit poll sources. But since we’re comparing exit polls over time, and not comparing them to other sources, we feel confident in saying that the electorate’s education level tends to be a little higher in midterms even if exit polls paint a picture of an electorate that is more educated than it is in reality.

Chart 2: Exit poll shares of electorate that are college graduates, 2004-2016 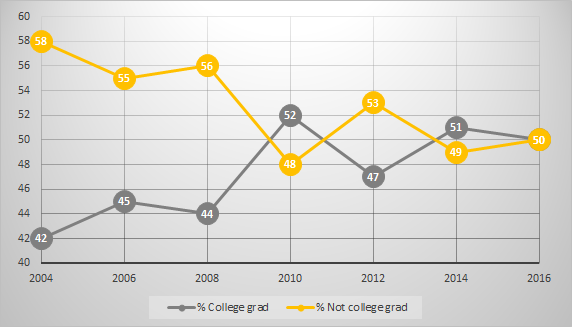 3. Midterm electorates are less racially diverse, though they too are becoming more diverse over time

Broadly speaking, nonwhite voters are less likely to cast ballots than white voters, whether in presidential or midterm elections. There had been a recent shift in presidential elections in this area because of increased black turnout rates in 2008 and 2012. But the 2016 exit poll and other data suggest that African-American turnout rates dipped again in 2016, leading to the reasonable conclusion that the historic candidacy of Barack Obama led to higher black participation.

Regardless of the presidential cycle differences, there’s little question that nonwhite voters tend to make up a comparatively smaller share of the midterm electorate than the presidential electorate. Chart 3 shows the data for the nonwhite share of recent presidential and midterm electorates. In every midterm cycle, the nonwhite portion falls, though there continues to be an overall increase as the American population becomes increasingly diverse. According to the 2015 American Community Survey estimates, the non-Hispanic white percentage share of the population of those 18-44 years old is 57% versus 73% for those 45 or older. And the under-18 population, which will age into the electorate, is 52% non-Hispanic white. Growing racial and ethnic diversity is a fact of American life, but for the moment we can expect midterm elections to still feature a smaller share of nonwhite voters relative to presidential elections.

This is hypothetically bad for Democrats given that they perform much better with nonwhite voters than white voters (which we explore more below). However, the political environment usually matters more than demographics: Democrats performed very well with a less diverse electorate in 2006, while Republicans won big victories in 2010 and 2014 despite the electorate becoming more diverse. An unpopular President George W. Bush in 2006 and an unpopular President Obama in 2010 and 2014 mattered more to the overall outcome than the electorate’s demographic makeup. 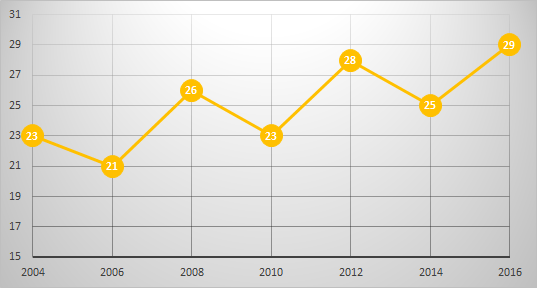 But while the demographic makeup of midterm electorates differs at least slightly from that of presidential elections, the voting patterns of those who show up for both kinds of elections are quite similar. Here’s three ways that’s so:

1. There is always a gender gap

As we’ve noted before, there’s been a persistent gender gap in American politics for nearly four decades. Basically, women are more Democratic than men, and men are more Republican than women. That’s not just true in presidential elections — it has also held for the lion’s share of other recent statewide races, too.

Chart 4 shows the Democratic margin among men and women for each presidential and midterm election since 2004. Notice how women are more Democratic than men (and men more Republican than women) in every election. 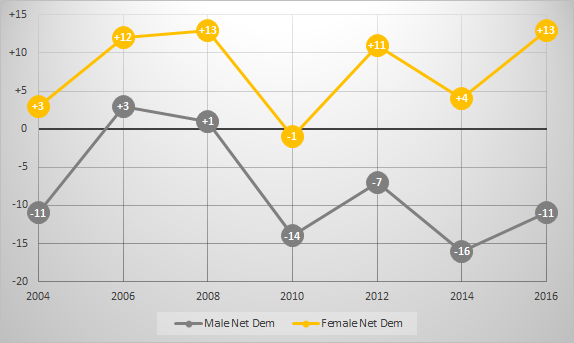 It has not always been the case that older voters are more Republican and younger voters are more Democratic. As recently as the 2000 election, exit polls did not find much difference among age groups in the close Al Gore vs. George W. Bush contest. Interestingly, though, Gore’s best group was actually voters aged 60 years or older (although he only won the group by four). Many voters age 60 or older in 2000 grew up in the time of the Great Depression and more often than not developed an affinity for Franklin Roosevelt and the Democrats, a party ID that endured in many cases. In the mid-1990s, the Pew Research Center found that younger voters were likelier to lean Republican, and older voters were likelier to lean Democratic. (Note that the exit poll shifted to 45-64 and 65+ for its two older age categories in its four-way age vote summary after the 2006 election, from 45-59 and 60+.)

One big difference between midterm and presidential electorates is that the midterm electorate skews older. On average, about 54% of the electorate was aged 45 or older in the most recent presidential elections, while an average of 64% of the midterm voters — nearly two-thirds — were 45 or older. Overall, 53% of the adult population is 45 or older, so older voters are significantly overrepresented in midterm elections. That’s a generic advantage for Republicans in midterms although, again, the overall political environment next year may be more important than the age of the participants.

Also note that there is a lot of variation in voting by age group even within the last dozen years. In 2004, voters 30 or older all voted somewhat similarly while the youngest voters were more clearly Democratic. As time went on, the 45-64 group and the 65+ group separated and then re-converged in 2016, while the difference between the 18-29 and 30-44 groups may be becoming less pronounced. That may be a result of the two younger age cohorts being similarly diverse (56% non-Hispanic white for 18-29s and 58% for 30-44s), while the two older age cohorts are much whiter (70% non-Hispanic white for 45-64s and 79% for 65+). 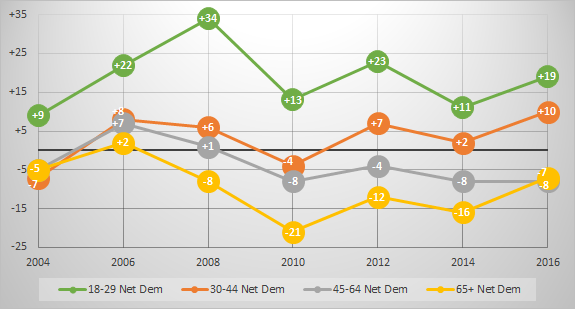 While midterm electorates are not as diverse as presidential ones, nonwhites vote substantially more Democratic than white voters in both kinds of elections. Chart 6 shows the difference.

Notice the midterm difference between 2006, when Democrats lost by just four among whites, to 2010 and 2014, when Democrats lost by more than 20 points in each. While the 2018 midterm electorate should be the most diverse ever because of broader demographic changes, roughly three-quarters of the voters next year likely will be white. If Democrats are going to make big gains, they almost certainly will have to lose white voters by less than 20 points — in other words, a narrower gap than they achieved with whites in any of the last four national elections, according to exit polls. 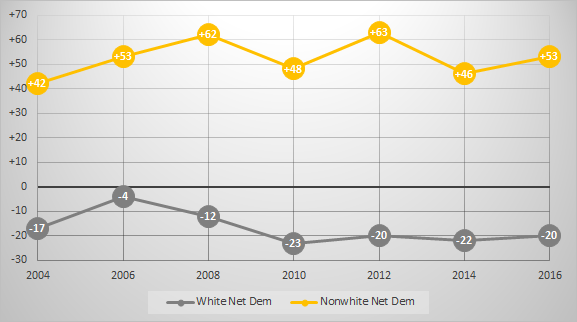 Note: For 2004-2014, overall nonwhite vote estimated based on size and vote of Black, Latino, Asian, and Other race exit poll categories.

Midterm electorates are older, whiter, and more educated than presidential electorates. The first two characteristics make midterm electorates, on paper, better for Republicans. The last characteristic, education, might be helpful to Democrats given Donald Trump’s struggles relative to other Republicans among college-educated white voters (he barely won that typically Republican-friendly demographic). The voting patterns of midterm voters are similar to presidential voters, though: Democrats do better with women as well as younger and more diverse voters, while Republicans do better with men, older voters, and whites overall.

Meanwhile, the number of total voters will be significantly smaller next year than in 2016: Turnout will be much closer to 40% than to 60%. Who shows up is vital. Often, the party that does not hold the White House turns out more strongly in the midterm, leading to gains for the out party. But Republican strength among the demographics that typically make up a bigger share of midterm voters — older whites — presents Democrats with a challenge next year.