Skip to content
Home
/
How Trump and Biden Voters View the Events of Jan. 6

— Overall, about 30% of the combined group of Biden and Trump voters at least somewhat believe the rioters are “patriots” who should be applauded for their actions, while about 70% at least somewhat believe they are “insurgents” who should be criminally prosecuted. The single, biggest predictors of the patriots vs. insurgents divide: belief in or rejection of conspiracy theories and the “Big Lie” that the outcome of the 2020 presidential election was illegitimate.

— This “patriots vs. insurgents” divide reveals in the starkest terms that we are now a nation at war with itself. Our democracy is effectively being held hostage to whether voters believe in conspiracy theories and the Big Lie, or not. Collectively, this analysis of the Jan. 6 events highlights in stark detail how deep, wide, and dangerous our national divide has become.

Patriots vs. insurgents: the diverging views of the Jan. 6 Capitol rioters

Focusing on the events that occurred on Jan. 6, 2021, the University of Virginia Center for Politics/Project Home Fire polling and data analytics project sought to better understand what distinguishes those who view the American citizens who occupied the U.S. Capitol as patriots trying to right the wrong of the 2020 presidential election having been stolen versus those who see these people as violent insurgents trying to overthrow valid 2020 presidential election results. At a time when our democracy needs urgent repair, the Project Home Fire team conducted additional analyses to uncover the attitudes and opinions that are most predictive of this “patriots vs. insurgents” divide. The results of this deeper analysis speak to the steps we need to take now to elevate community and consensus over conflict, while demanding accountability and responsibility from our elected officials if we want to safeguard against these events repeating themselves.

First, our analysis shows that as with so many other issues, Trump and Biden voters have very different views of the Jan. 6 events. A little more than half (52%) of Trump voters versus just 10% of Biden voters at least somewhat agree with the following statement: “The people who occupied the US Capitol on Jan. 6, 2021, should be applauded because they were mostly patriotic Americans trying to right the wrong of the 2020 presidential election being unfairly stolen from Donald Trump by massive election fraud.”

Conversely, 90% of Biden voters (vs. 48% of Trump voters) at least somewhat agree that “The people who occupied the US Capitol on Jan. 6, 2021, should be criminally prosecuted to the full extent of the law because they were mostly violent insurgents trying to overthrow the results of a free and fair Presidential election.” These results, based on polling of Trump and Biden voters from the summer, are shown in Table 1. 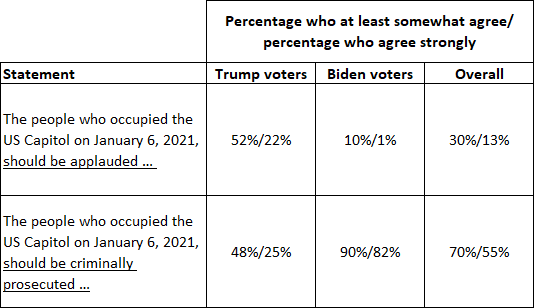 Next, we looked to identify what most predicts the views of the roughly one-third of the electorate who see those who occupied the US Capitol as patriots vs. those who see them as insurgents. The single, biggest predictors of the patriots vs. insurgents divide: belief in or rejection of conspiracy theories and the “Big Lie” that the outcome of the 2020 presidential election was illegitimate.

On the one hand, our analysis shows that belief in conspiracy theories correlates with a “fear of the other” and “us vs. them” mindset, support for secession, and an openness to using violence to stop the other side from achieving their political goals. Collectively, these four beliefs are most powerfully predictive of those voters who view the people who stormed the US Capital on Jan. 6, 2021 as patriots. More specifically, ranked in order of importance, these beliefs include a stronger likelihood of agreeing with the following statements:

On the other hand, our analysis revealed a rejection of the Big Lie together with social justice concerns, support for the expansion of voting rights and access, and belief in the idea that government should and can work for people as most powerfully predictive of voters seeing the events of Jan. 6 as initiated by insurgents’ intent on subverting the electoral process. Ranked in order of importance, these include:

Collectively, this analysis of the Jan. 6 events highlights in stark detail how deep, wide, and dangerous our national divide has become. Our democracy is effectively being held hostage to whether voters believe in conspiracy theories and the Big Lie, or not. It should be striking and concerning to all that the worldview of 30% of voters who voted for either Biden or Trump in the 2020 presidential election — and 52% of Trump voters overall — animates around the idea that our democracy is corrupt, that the 2020 election was stolen through election fraud and voting manipulation, and that violence in pursuit of political ends, more than just being acceptable, is to be applauded.

Our national crisis is in many ways a reflection of the crisis of a Republican Party that is a captive of Donald Trump and his enablers. They have convinced too many Americans that the real insurrection occurred on Nov. 3, 2020 and that the presidency was stolen from them; that they are losing ground and losing their country through no fault of their own; and that the American government is undemocratic and corrupt beyond repair.

The threat is real and the time for action is now. In our work to date, we’ve identified more than 40 million people who reject the idea that the worldview espoused by Donald Trump and his allies is inevitable. This “bridging population” as we have discussed it wants something different. They embrace the idea that government should and can work for people. They want government to proactively address issues that polarize our politics, including immigration, race, climate change, and voting rights. They see ongoing conflict, obstructionism, and a willingness to prioritize power and position over working together to proactively address our domestic and international challenges as a bad thing.

The next step is to work together to pursue a series of strategies and tactics for engaging these people directly. To identify and elect leaders who reject the politics of division and the autocratic goals of those it serves. To work together to show how realizing the promise and potential of our democracy needs to start with the idea that solutions that incorporate the perspectives of both sides can be better than those that come from only their side. This is the central, defining, most important problem that faces us now. How we respond — whether those on the side of protecting, preserving, and expanding democracy can muster the same energy and resolve as those intent on tearing it down — will determine whether our democracy survives this test, or not.

For more information on the University of Virginia Center for Politics/Project Home Fire polling and data analytics project and how it is being conducted, see the previous stories in the Crystal Ball exploring the deep and persistent divides between Biden and Trump voters; what drives support for secession; the outsized role immigration plays in fueling our national divide; who is most open to compromise in American politics; and the polarization of attitudes on voting rules.