— In advance of Saturday’s runoff gubernatorial election in Louisiana, the data point to Gov. John Bel Edwards (D-LA) as a small favorite.

— We’re moving our rating there from Toss-up to Leans Democratic, but even if Edwards holds on, it may not be by much.

— In the aftermath of Virginia’s election, we found some further signs of nationalization in the results.

One last look at the Bayou battle

Star New Orleans Saints quarterback Drew Brees often implores his team to “finish strong.” As Gov. John Bel Edwards (D-LA) faces his runoff with businessman Eddie Rispone (R) on Saturday, there are some signs that Louisiana’s Democratic electorate is doing just that. But it’s still an open question as to whether that will be enough for Edwards.

In last month’s jungle primary, national Democrats hoped Edwards could clear 50% to win outright. Instead, the governor polled at 46.6%. That was better than the 42% that former Sen. Mary Landrieu (D-LA) took in her 2014 Senate primary — she would lose the runoff 56%-44% to now-Sen. Bill Cassidy (R) — but not an ideal result. Rispone clinched a runoff spot, narrowly edging out Rep. Ralph Abraham (R, LA-5), who is popular in his northern Louisiana district but couldn’t match Rispone’s strength in the more populous metro areas.

In the primary, subpar black turnout was the most obvious factor that held Edwards below 50%. State analyst and pollster John Couvillon estimated that black voters made up 26.5% of the primary electorate. By comparison, even in a hostile midterm, Sen. Landrieu was able to generate a 30% black electorate in both her primary and runoff.

Looking to Saturday, the early vote suggests that Democrats are turning out their base. With early voting for the runoff concluded, the returns paint a more promising picture for Edwards. Compared to the electorate that voted early in the primary, all but six parishes have seen an increase in the black share of their voters (Map 1). Statewide, nearly 490,000 votes were cast early, the highest amount ever in a non-presidential race, and black voters accounted for 31%, a prerequisite for a Democratic win.

Map 1: Change in black share of the early vote from the 2019 Louisiana primary to runoff 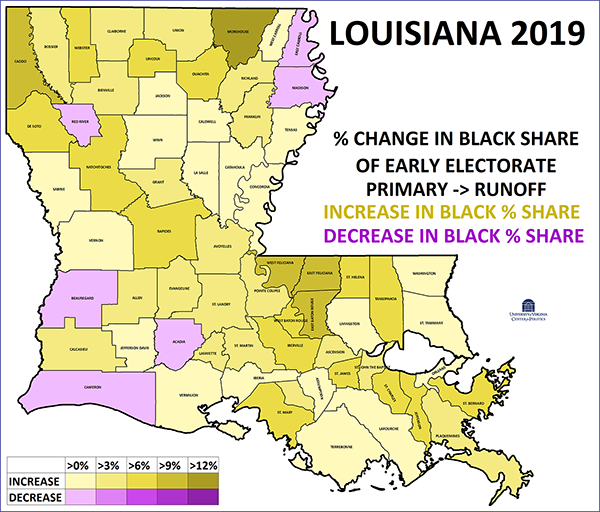 East Baton Rouge Parish (which contains Baton Rouge proper) and Caddo Parish (Shreveport) both saw robust 9.4 percentage point increases in their black composition. Jefferson Parish, a large suburb of New Orleans, was not far behind, with an 8.5-point uptick.

Though it’s not one of the most populous parishes, Morehouse, in the northeastern corner of the state, should be worth watching on Saturday. By registration, it’s split almost evenly between black and white voters. Edwards’ 56% there in 2015 matched his statewide share. In the primary, Abraham carried it with 43% to Edwards’s 42% (it’s in his 5th Congressional District), but since then, it’s seen the most acute spike in black enthusiasm, 13 points.

While the standard caveats apply — namely, that the strong early vote tallies could be a cannibalization of Election Day numbers, particularly as early voting becomes more and more popular in Louisiana (and elsewhere) — the consistently lagging black vote during the early voting period in the primary was a harbinger that Edwards would fall under 50%. This time, the early vote suggests — perhaps — a reversal of fortune.

For his part, as a Republican in a red state, Rispone has leaned heavily on President Trump. While this may be shrewd from a messaging perspective, at this late stage mobilization is paramount, and the numbers suggest Republicans are being outmaneuvered. Further, last week’s results in Kentucky showed that the president’s support has its limitations even in red states; despite an election eve rally, Trump couldn’t salvage Gov. Matt Bevin’s (R) prospects.

Rispone entered the runoff having to distance himself from controversial GOP donor Lane Grigsby. This came to a head when Rob Maness, a two-time Senate candidate who has a following with conservatives, cited Grigsby and Rispone as his reasons for leaving the GOP. While these quarrels in and of themselves may not sway swing voters, they hardly project a unified state party.

Rispone has never actually led Edwards in public polling, although the surveys have shown a very close race that is within the margin of error. Two polls this week, one from Mason-Dixon and another from GOP pollster Cygnal, each had Edwards leading, but by only two points.

Despite the tight margins, Edwards’ approval/favorability stood at a solid 54% in each poll. While it’s rare that governors with that type of standing find themselves in such contested races, it suggests that, if Rispone finishes ahead, it will be primarily due to the red nature of the state. Last week, Gov.-elect Andy Beshear (D) narrowly overcame Kentucky’s Republican statewide leanings to defeat the unpopular Bevin; can Edwards, as an incumbent, do the same?

Ultimately, the data collectively suggest Edwards is a modest favorite for reelection. If the governor’s showing in the primary were more like Landrieu’s 42% in 2014, we’d feel much more bullish about the GOP’s chances. As Edwards’ 46.6% was several points better, and the early vote indicates a more Democratic electorate in the runoff than in the primary, it just seems like he has a clearer path to 50% than Rispone. We’re changing our rating for Louisiana from Toss-up to Leans Democratic.

That said, the race remains very close and competitive, and even if Edwards wins, it likely won’t be by much.

Virginia’s 2019 state legislative election further aligned the state’s districts along 2016 presidential voting results. Going into the election, we noted that Democrats held no seats won by Donald Trump in 2016 in either the state House of Delegates or state Senate, and that Republicans held seven House districts and four state Senate seats won by Hillary Clinton in 2016.

Democrats flipped two of the four GOP-held Clinton districts in the Senate to forge a 21-19 majority, but Republicans held onto their other two Clinton-won Senate seats, both of which were closely decided both for president in 2016 and for Senate last week (SD-7 and SD-12).

In other words, the 2019 Virginia results were defined largely by presidential partisanship. Overall, Clinton carried 56 of 100 districts under the new, partially court-drawn Virginia House of Delegates map, and Democrats won a 55-45 majority. In the state Senate, under a map drawn by Democrats at the start of the decade, Clinton carried 23 of 40 districts, and Democrats won a 21-19 majority.

With the legislature under their control, Democrats in the Commonwealth will now turn their attention to 2020. At the senatorial level, Sen. Mark Warner (D) will run for a third term. As we’ve noted in previous articles, Warner has done a better job finding crossover support in rural areas of the state than most other Democrats. Though he faced an unexpectedly close race in 2014, he won, in part, thanks to his uncommon appeal in Appalachia.

Compared to fellow Sen. Tim Kaine (D), who was reelected in a 57%-41% landslide, Warner ran a bit better in rural western parts of the state while the Urban Crescent powered much of Kaine’s overperformance (Map 2).

Loudoun County, which swung 29% more Democratic, and Alleghany County, which moved 36% more Republican, experienced some of the sharpest swings between the elections. Taken together, they offer concrete clues about how the 2020 Senate map could shape up.

One of the most seemingly anachronistic features of Warner’s 2014 map was that he lost Loudoun County, albeit by less than 500 votes. A swing county in the Obama era, Northern Virginia’s Loudoun is the wealthiest county in the state and has reacted especially poorly to Trump’s populist brand of Republicanism.

At the legislative level, similar trends have taken hold there. In 2015, GOP candidates won the popular vote 55%-45%, to maintain a majority of the Loudoun delegation in the House of Delegates. Last week, Democratic candidates won nearly two-thirds of the popular vote there (although this was inflated somewhat due to uncontested races). Given this movement, it seems that Warner almost certainly will gain Loudoun County back in 2020 (he carried it in his landslide 2008 Senate race).

In Appalachia, one of the few rural counties that Warner carried was Alleghany, which sits in the middle of the Shenandoah Valley. Warner posted a comfortable 53%-44% margin there in 2014; by 2018, Kaine took just 36%.

In the state Senate, Alleghany County is in SD-25, held by Democrat Creigh Deeds, a fixture in local politics. Deeds was the party’s nominee in the 2009 gubernatorial race — despite losing the election with just 41% statewide, he cleared 60% in Allegheny.

SD-25 bridges several rural counties in the Shenandoah Valley to liberal Charlottesville (the Center for Politics’ home base). Though he’s from rural Bath County, and has traditionally done well in the western counties, Deeds was reliant on the Charlottesville part of his district last week. Though he was reelected with 67.5%, Deeds’ western counties defected to Elliott Harding, an independent candidate who previously worked for Republicans (Map 3). Going forward, it may be hard to see how Warner can replicate his 2014 margin in Alleghany County if a proven local figure like Deeds can’t carry it.

If this indeed happens in 2020, it’s a great tradeoff for Warner: Loudoun cast 183,050 votes in the 2016 presidential race, while Alleghany cast only 7,325. There are lots of counties like Alleghany in western Virginia that are moving red, but they are not densely populated — and the blue trend in Loudoun and several other big Virginia counties has been more electorally significant statewide. 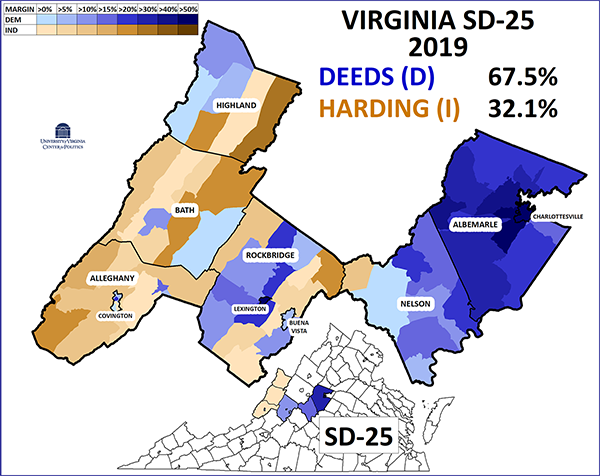 — Kyle Kondik contributed to this article.