As we noted in the Crystal Ball last week, the congressional redistricting process is unfolding across the country, to the point where we now have a handful of states with finalized maps — meaning that, barring a successful lawsuit down the line, these states have their maps in place for the 2020s.

We are going to be issuing House ratings on a rolling basis for states with completed congressional maps. Those who have followed us over the years are familiar with our usual House rating tables, which omit safe seats on both sides and just list the Toss-up, Leaning, and Likely seats controlled by both parties. We likely will revert to that table, with some modifications, once redistricting is completed or mostly completed across the country. For now, however, we’re going to just list the ratings for all of the seats where redistricting is completed so far.

Table 1 shows the ratings for the 4 states that have completed redistricting so far — Indiana, Maine, Nebraska, and Oregon — as well as the 6 states that have just a single congressional seat and therefore don’t need to redistrict for Congress. Each district (by number and state) is sorted into its rating column. We also denote in the “current party breakdown” column whether a state is adding or losing a district.

So, let’s look at Oregon, for instance. Oregon’s House delegation is 4-1 Democratic right now and is adding a 6th seat. The one Republican seat, district 2, is listed in the Safe Republican column. Two of the state’s other districts, 1 and 3, are rated Safe Democratic. And the other 3 districts, 4, 5, and 6, are rated as Likely Democratic and included in that column. Rep. Peter DeFazio’s (D) OR-4, which got nearly 10 points more Democratic in redistricting, is just barely on the board, while the new OR-6 is firmly in the Likely Democratic category. 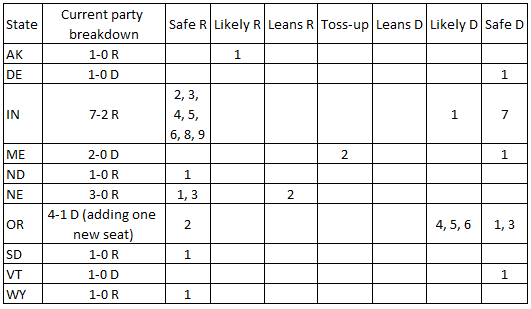 Of the states where districts are complete, probably the most obviously competitive race is in ME-2, where Rep. Jared Golden (D) got a little bit of help in redistricting, but he still holds a district that voted for Donald Trump by 6 points. He faces a likely rematch with former Rep. Bruce Poliquin (R, ME-2). Of the 3 Oregon districts rated as Likely Democratic, OR-5, represented by Rep. Kurt Schrader (D), is the one that would be the closest to going in the more competitive Leans category: Joe Biden only won it by 9 points (he won the other two by double digits), and Schrader has irked some on the left and could face a credible primary challenge. One other fringe Republican target to watch is IN-1, held by first-term Rep. Frank Mrvan (D). Republicans gerrymandered Indiana to lock in a 7-2 edge in the state’s delegation, but they decided not to target this Republican-trending but still Democratic seat (Biden won IN-1 by 8 points). Mrvan has the benefit of being from a well-known family in this parochial area, but this district could be competitive this year or in years to come.

We’ll continue to update this table as maps are finalized, and you can see our House ratings (as well as our Senate and gubernatorial ratings) at centerforpolitics.org/crystalball.