While potential presidential candidates are just beginning to jockey for pole position for 2016, there has already been one clear winner: the state of Iowa. Its precinct caucuses have retained the leadoff spot in the next nominating cycle in spite of one of the most embarrassing vote counts in modern political history two years ago by the Republican Party of Iowa.

It was an historical oddity, as an eight-vote caucus night “victory” for Mitt Romney on Jan. 3 was transformed into a 34-vote advantage for Rick Santorum more than two weeks later when the vote was finalized. If the latter result had been available caucus night, Romney would probably have headed off to New Hampshire, where he scored a landslide win, with less momentum and Santorum with considerably more.

As it was, the Iowa GOP threw up its hands at the end of the vote count and said no winner could be definitively declared since the results from all the precincts could not be retrieved (eight of 1,774 never submitted their official vote). It expressed congratulations to both candidates.

To be sure, the vote was unusually close, but the nebulous result shone a negative light on the Iowa caucuses and seemingly tarnished the image of its first-in-the-nation franchise. Yet as both parties nail down their rules for 2016, Iowa still occupies the coveted No. 1 slot.

Sources: 2016 dates are from the Democratic National Committee.

Primarily, it is because neither party is in a mood to tear up the current nominating process for a leap into the unknown — whether it is in the form of a national primary, a series of regional or rotating primaries, or an open audition for a new lead-off state. Nobody in party leadership wants to go there, says John Ryder, general counsel for the Republican National Committee and a member of its rules committee. “Once you open the Pandora’s Box and consider who replaces Iowa, 30 or 40 states would say, ‘Me.’”

As a result, the upcoming presidential campaign will start once again in a state where the pluses and minuses are writ large.

On the plus side, Iowa offers tradition and familiar terrain — a venue that candidates and the media readily accept. It is small enough (just four congressional districts) to enable long-shot candidates from Jimmy Carter to Rick Santorum a chance to break through by investing months and months of time in retail campaigning. And it is a swing state in November, whose complement of electoral votes can provide the margin of victory in a closely contested presidential election. The caucuses offer candidates a head start in building their organizations and name familiarity for the general election.

Yet Iowa is not a microcosm of the nation as whole. It is overwhelmingly white and rural in nature. The Democratic caucus electorate is skewed to the left — as nearly 55% of Democratic participants in 2008 labeled themselves either “very liberal” or “somewhat liberal.” Meanwhile, the Republican caucus electorate is skewed to the right — roughly 60% of GOP caucus voters in both 2008 and 2012 considered themselves to be “born-again” or evangelical Christians.

And in an age where the nominating process is dominated by primaries, caucuses — of which Iowa is the most prominent — are something of a dying art form. They have drawn criticism the last few election cycles for their comparatively low turnouts. Unlike primaries, where polling places are open all day, the Iowa caucuses are held at a set time on a winter evening when a number of voters are unable or unwilling to attend.

Hillary Clinton was particularly critical of this aspect of the caucuses when she ran for president in 2008. Although Democratic turnout approached 240,000 that year, an Iowa caucus record for either party, she was unable to construct the blue-collar coalition that carried her to victory in a number of primaries. Clinton finished third in Iowa behind both Barack Obama and John Edwards. 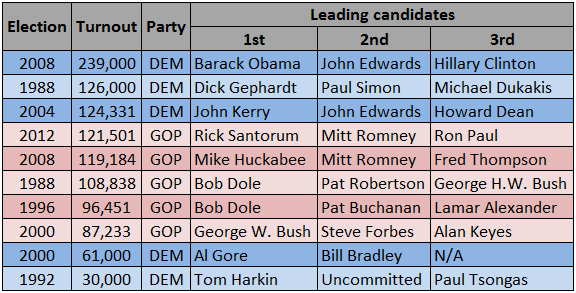 Note: Iowa Democrats traditionally do not compile a raw vote tally and their turnout is often given as an estimate.

Whether responding to Hillary or caucus critics in general, Iowa Democrats are considering proposals to make their event more accessible to voters in 2016. Among the ideas that are being floated: the passage of state legislation that would enable non-essential employees to take time off to attend the caucuses; the addition of child care at caucus sites to accommodate parents and single mothers with young children; the establishment of satellite caucus sites to make it easier for voters with disabilities or other limitations to participate; and the creation of a tele-caucus for voters serving in the military.

Iowa Republicans have expressed interest in what their Democratic counterparts are doing and may piggyback on their proposals.

But would even a “reformed” Iowa caucus process attract a full field of Democratic and Republican candidates?

In recent years, several relatively moderate Republican contenders have basically skipped them. John McCain did so in 2000 and limited his Iowa effort in 2008 in order to focus on New Hampshire. Rudolph Giuliani downplayed the Hawkeye State in 2008 in order to concentrate on Florida. Jon Huntsman skipped Iowa altogether in 2012 and put all his chips on New Hampshire. Only McCain made the “downplay Iowa” strategy work, as he won New Hampshire in 2008 and went on that year to capture the Republican presidential nomination.

Chris Christie is the potential 2016 GOP candidate being watched most closely about his Iowa plans. He is largely seen as outside the socially conservative mainstream of the Iowa Republican Party. But he is a charismatic “force of nature” that could fare well in Iowa’s “up close and personal” style of campaigning. And in a crowded GOP field, Christie could be highly competitive with 20% to 25% of the vote, just as Romney approached 25% in 2012 by dominating the vote among the large minority of Republican caucus-goers who were not evangelical Christians.

Actually, the prospective candidate who may be the most likely to skip the caucuses in 2016 is Hillary Clinton. Neither she nor her husband has established any special relationship with Iowa. When he first ran for president in 1992, Bill bypassed the caucuses in recognition of the home-state appeal of Iowa’s own White House entry, Sen. Tom Harkin (D). And Hillary reportedly considered skipping Iowa when she first ran in 2008.

She was a strong frontrunner for the Democratic nomination then and presumably would be again in 2016 if she runs, creating very high expectations for her to meet in the opening contest. Yet if she skipped the caucuses, she might provide an opening for a liberal Democrat such as Elizabeth Warren, Martin O’Malley, or Bernie Sanders (to name a few) to gain traction.

It will probably be well into 2015 before the declared candidates make final decisions on whether their prospective route to the White House takes them through Iowa. Right now, indicates David Yepsen, the former chief political writer for the Des Moines Register and now the director of the Paul Simon Public Policy Institute at Southern Illinois University, the potential candidates for 2016 are in an active exploratory stage as they descend on the state with regularity. “We don’t hear talk about bypassing Iowa yet,” says Yepsen. “The vibe here is ‘game on.’” 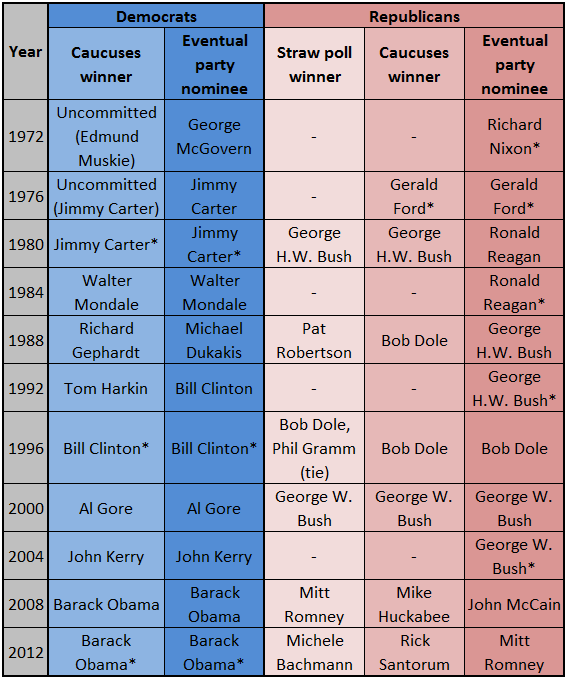 Notes: A dash (-) indicates that no straw poll or caucus vote was taken. An asterisk (*) denotes an incumbent president. The Iowa Republican straw poll has traditionally been held in the summer preceding the Iowa caucuses. In 1972 and 1976, “Uncommitted” finished first in Democratic caucus support but Edmund Muskie and Jimmy Carter, respectively, were the leaders among the candidates. In 1976, the Republican result was based on the vote in a sampling of precincts.