A number of months ago, I engaged in a spirited debate with Alan Abramowitz and Ruy Teixeira over whether there were “missing white voters” in the 2012 election upon which Republicans could potentially draw in the future to win elections. We also sparred over whether white voters were trending Republican, potentially offsetting Democratic gains among nonwhites.

Lost in this debate was a clever argument, set forth by Nate Cohn (then of The New Republic) and also alluded to by Benjy Sarlin at MSNBC. The gist of the argument was this: Even if whites are, in fact, moving toward Republicans, they are primarily moving toward Republicans in already-red Southern states and in Greater Appalachia — states like West Virginia, Kentucky and Arkansas, which were largely settled by Scots-Irish immigrants and their descendants. Cohn looked at competitive states’ Partisan Voting Index (how a state votes relative to the national popular vote) in 2000 and again in 2012 and concluded that almost all of the movement in competitive states has been toward Democrats. You can see the basis for Cohn’s argument in the table below from his article. 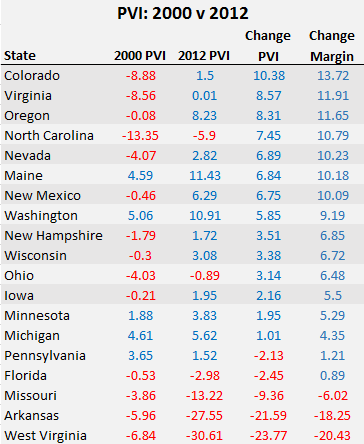 This argument unfortunately slipped through the cracks due to the uproar over the main hypothesis. It has particular contemporary significance in light of some of the discussions that have occurred regarding the Democrats’ difficulties in the House and, to a lesser extent, the Senate. After all, it is becoming close to the conventional wisdom that a major reason Democrats failed to capture the House in 2012, despite winning a plurality of the popular vote, is that their vote is inefficiently distributed. There have also been pieces discussing a similar problem for Democrats in the Senate.

What Cohn, Sarlin and others are essentially hypothesizing is that Republicans are developing a similar problem in presidential politics: As their vote share becomes increasingly concentrated among Southern whites, Republicans might remain competitive in the popular vote. However, their vote shares among northern whites will remain insufficient to offset the votes of the minority populations of those states, making it difficult for the GOP to win the Electoral College.

I have two basic, interrelated thoughts. They revolve around the issues of which year should be used as a baseline and around the definition of a swing state.

The issue of the baseline year is particularly important. Put differently, from which year should we measure the change in the Electoral College? Cohn uses 2000 as the baseline, but that year had a substantial problem: Ralph Nader.

To see how Nader renders 2000 problematic as a baseline, consider the example of Minnesota. In 2000, Al Gore won Minnesota with 51.3% of the two-party vote while winning 50.2% of the national two-party vote. Minnesota was only a point more Democratic than the country as a whole that year.

In 2012, Barack Obama won Minnesota with 54% of the two-party vote, while he won nationally by four points. So the state was two points more Democratic than the country as a whole that year.

Using 2000 as a baseline then, we’d conclude that the state has actually moved a point toward the Democrats, once you control for national effects.

But the problem is that Ralph Nader ran extremely well in Minnesota in 2000, earning 5.2% of the vote. If we combine Nader’s and Gore’s vote share — as John Judis and Ruy Teixeira did in their 2002 classic The Emerging Democratic Majority — the state moves slightly toward Republicans.

This problem is present to varying degrees in various states from 2000. But if we use, say, 2004 as the baseline — a year without any significant third-party candidates present — we find that Minnesota moved a point toward Republicans over the past two cycles, relative to the country as a whole.

There is a similar problem in 1992 and 1996: Ross Perot. While the national exit polls suggested that Perot pulled evenly from Bush and Clinton in 1992, this was likely not the case in every state (very Republican Wyoming was a six-point race in 1992, likely because of Perot pulling in large numbers of Republicans). With Perot claiming 24% of the vote in Minnesota in 1992 and 12% in 1996, and without knowing from whom he was taking those votes in Minnesota, those years become difficult to use as baseline years.

The elections of 1992, 1996 and 2000 are difficult years to use as baselines for measuring partisan shifts due to the presence of significant third-party efforts, which will skew the partisanship of the states in ways that are very difficult to account for. Even exit polls are of little use because candidates likely have regional effects that national polls can’t account for.

This leaves us with 1988 and 2004 as reasonable baselines for measuring partisan shifts. The latter seems awfully recent, while the former seems awfully far in the past. Forced to choose, I’d probably go with 1988, since that’s the year before Judis and Teixeira hypothesized that the Emerging Democratic Majority was really taking shape. But as we’ll see, we’re not necessarily forced to choose.

Table 2: Weighted averages of the movement of electoral votes in competitive states, 1980 to 2008

So let’s say that you think 1984 is the best baseline, and that a swing state should be defined as a state that is four points more Republican/Democratic than the country as a whole or less. You’ll see the number in the corresponding bin is 0.9%.

Now, what does that number mean? This is a bit complicated, but it’s an important measurement. Let’s continue with our example. What that number means is that I looked at all the states in 1984, and compared them to how they voted in 2012. I then excluded all of the states that were non-swing for Republicans or Democrats and stayed non-swing for Republicans or Democrats. That is to say, a state that was safely Republican and stayed safely Republican is excluded. The same is true for safely Democratic states.

A state that either was or became a swing state, or that crossed all the way over from safely Republican to safely Democratic or vice versa, is also included. This gives us a universe of states that affected the parties in their quests to remain competitive in the Electoral College. (Note: The use of PVI is somewhat controversial, for reasons I have explored in earlier articles. But remember, the point being pressed forward assumes, at least for the sake of argument, that the growth of the minority population is being offset by a countervailing movement among whites, leaving the relative national baseline unchanged).

What you see in each cell is the weighted average of the movement of electoral votes in competitive states (using the varying definitions of “competitive”). So in our above example, states that were four points or closer to the national average in 1984 shifted the Electoral College 0.9% toward the Democrats by 2012.

On the other hand, using 1980 as our baseline and defining swing states as those 3% or closer to the national average, we see 0.7% movement toward Republicans.

Glancing over the chart, the question of whether the Electoral College has become biased against Republicans really does depend heavily on how you define a swing state and what your baseline is. If we use 1984 as our baseline year, and define swing states as those that are within one point of the national average, the swing states have moved a whopping three points toward the Democrats. This would suggest a real problem for Republicans. If, however, we use the same definition of swing state but take 1992 as our baseline, the Electoral College has shifted 1.4 points toward Republicans.

Perhaps the best approach is simply to average all of the shifts for all of the various baseline year/swing state definition pairs. If we do this, the average movement among swing states is 0.3% toward Democrats. This suggests that there has been a biasing of the Electoral College away from Republicans, though it has been relatively small. If we use what I think are the most reasonable definitions of a swing state — somewhere between 3% and 5% as a maximum — the average movement is 0.1% toward Democrats. If we use that definition of a swing state, but look at the most plausible baseline years (1988, 2004 and 2008), we see, respectively, shifts of 0.6% toward Democrats, 0.2% toward Republicans and 0.3% toward Republicans.

Overall, I think these data suggest that there has been something of a biasing of the swing states away from Republicans, but that it hasn’t been particularly substantial. Of course, it may well be the case that it will become more substantial in the future, if the GOP has just only now reaped fully the rewards of Greater Appalachia and the South moving their direction. With formerly Democratic states like West Virginia now out of “swing state” territory, perhaps the Electoral College will begin to shift more dramatically against Republicans.

But it’s also true that the northern white vote has moved somewhat against Democrats, though that movement hasn’t been as pronounced as the movement among southern whites. To use a quick example, notwithstanding the general shift toward Democrats nationally between 2004 and 2012, Romney did better than George W. Bush among whites in Michigan in absolute terms. He performed only a point worse than Bush in Wisconsin among whites, notwithstanding the national shift.

This movement was masked by the surge in minority turnout and in minority support for Democrats in these states. Had Romney performed as well among minority voters as Bush and had turnout looked like it did in 2004 (both states have been pretty demographically stable over the past decade), both states would have been close in 2012. In fact, Wisconsin would have been more Republican than the country as a whole, and Michigan would have sat around the national average.

The billion dollar question for 2016, as far as I am concerned, is not whether the GOP can improve its showing among Hispanics, but rather whether white support for Republicans and African-American support and turnout for Democrats is stable in a post-Obama presidential electorate. I could argue these either way, but they probably are crucial to determining whether the Upper Midwest retains its blue-ish hue (also, the long-term implications of right-to-work in Michigan and the controversial Wisconsin labor statute for voting habits among working-class whites are difficult to foresee).

But for now, it appears that the electoral losses the Republicans have been suffering in states like Nevada and New Hampshire have been offset elsewhere. Whether this trend continues into the future remains to be seen.