— Although few incumbents lost renomination in 2018, much turnover in the House and governorships remains possible, even likely. In all, 58 House members have retired, second only to the 1992 cycle, and including open seats via redistricting in Pennsylvania and incumbent primary losses, 64 House seats will feature no incumbent running in November. Meanwhile, 17 gubernatorial contests have no incumbent in the general election (including Kansas, where Colyer lost), nearly half of the 36 seats that are up in 2018.

With the completion of New York’s primary for state-level offices on Thursday, Sept. 13,[1] 49 states have concluded their nomination processes for the 2018 November election. Because Louisiana has a unique system whereby candidates can win outright with a majority in the state’s all-party blanket primary on Nov. 6, this means that every state with a two-step electoral process (first a primary, then a completely separate general election) has finished choosing candidates for office. This also means that any incumbent seeking another term in office in states outside of Louisiana has now successfully advanced to the general election or met defeat in a primary. As a whole, incumbents won renomination in U.S. Senate, U.S. House, and gubernatorial nomination contests at a typical rate in 2018.

Just four members of Congress lost renomination out of the 401 senators and representatives who sought another term in office in a primary outside of Louisiana. No senators lost renomination, but four House members fell in primaries or primary runoffs: Reps. Mike Capuano (D, MA-7), Joe Crowley (D, NY-14), Robert Pittenger (R, NC-9), and Mark Sanford (R, SC-1). Pittenger and Sanford’s losses truly shocked few observers. Both had faced tough primary challenges in recent times: Pittenger won his 2016 primary with only 35% and by a margin of just 0.5 points on a new congressional map, and Sanford won his 2016 primary 56%-44%. Moreover, Sanford had been critical of President Donald Trump, increasingly a no-no in GOP circles, while Pittenger faced the same opponent in 2018 whom he had narrowly defeated in his 2016 primary. Meanwhile, the Democratic losses were more surprising, particularly the one that has received the most attention: Activist Alexandria Ocasio-Cortez defeated Crowley 57%-43% in the NY-14 Democratic primary, a seismic result that turned out a potential future speaker of the House and brought in a new public face for the Democratic left. Ocasio-Cortez’s victory suggested that Capuano, another veteran, white Democrat in a diverse urban district, might be in trouble, and Boston city councilor Ayanna Pressley defeated Capuano 59%-41% in the early September primary. While the losses by Capuano and Crowley differed in some respects, they both led to a similar result: A nonwhite woman replacing a white man in a heavily Democratic urban district.[2] Given the large number of women running for office on the Democratic side in 2018, these primary losses make more sense in the larger picture of the election.

Outside of the four congressional defeats, the only other incumbent to lose renomination in 2018 was Gov. Jeff Colyer (R-KS). However, Colyer ascended to the governorship in Topeka from the lieutenant governor post when then-Gov. Sam Brownback (R) resigned in early 2018 to take a post with the Trump administration, making Colyer a “successor governor,” a historically weaker position than that of an elected incumbent. Even then, Colyer only lost renomination by a hair: His 0.1-point margin of defeat at the hands of Kansas Secretary of State Kris Kobach proved to be the narrowest primary loss for an incumbent governor in U.S. history. The 2018 cycle featured four successor incumbent governors seeking a full term in their own right, and Colyer was the only one to lose a primary, though Gov. Henry McMaster (R-SC) had to survive a primary runoff to advance to the general election.[3]

No senators lost renomination in 2018, the third consecutive cycle without such a defeat. The last Senate incumbent to lose an intraparty contest was Sen. Richard Lugar (R-IN), who lost to Indiana Treasurer Richard Mourdock in the Hoosier State’s 2012 GOP primary. That said, we did not get to find out if Sens. Jeff Flake (R-AZ) or Bob Corker (R-TN) would have won renomination had they attempted to run again; Flake in particular seemed a likely loser thanks to his criticism of the president, which probably contributed to his decision not to seek a second term. This gets at one factor to keep in mind when considering why incumbent renomination (and overall reelection) rates tend to be high: The most vulnerable pols may not seek reelection, possibly because of fears about an intraparty challenge or because of a potentially dangerous general election contest.

For all the talk of fractures in parties and political upheaval, the 2018 cycle does not stand out as particularly troublesome for incumbent renomination. In all, 100% of senators, 99% of representatives, and 95% of governors who sought renomination in Democratic or Republican primaries/conventions won renomination in 2018. Chart 1 shows the renomination rates for incumbents seeking reelection for Senate, House, or governor from 1974 to the present. The chart utilizes data from elections that had the aforementioned two-step primary-general election process (thus excluding most Louisiana elections in that period as well as a few other cases). The gubernatorial renomination rates include odd-year elections with the next regular cycle (i.e. a 2013 incumbent governor’s primary is included in the 2014 numbers). Overall, in the 1974-2018 period, incumbents won renomination at the following rates: 97% for senators, 99% for representatives, and 95% for governors.

Chart 1: Renomination rates for incumbents in the U.S. Senate, U.S. House, and governorships in presidential and midterm cycles, 1974-2018 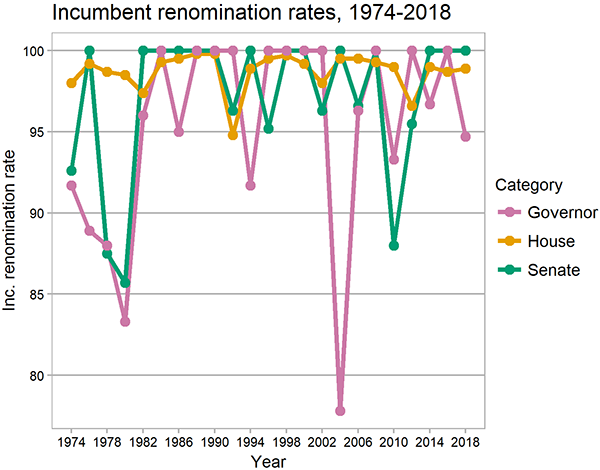 Notes: The 1974 data include New Jersey’s 1973 gubernatorial election. The data exclude recall elections. The data exclude any incumbents who ran in blanket primary elections where a candidate could win an election outright with a majority, such as all gubernatorial elections in Louisiana for the 1974-2018 period as well as congressional elections there from 1978 to 2006 and 2012 to present. The excluded data also include some blanket House elections in Texas in the 1990s and 2000s plus three Senate races (2008 and 2018 in Mississippi, 2000 in Georgia). The data also exclude independent incumbents seeking reelection as they did not make the ballot via primaries or conventions. In three cases, incumbent senators who lost renomination in a major party primary still ran in the general election as a third-party nominee (Sen. Jacob Javits, R-NY, in 1980), an independent (Sen. Joe Lieberman, D-CT, in 2006), or as a write-in candidate (Sen. Lisa Murkowski, R-AK, in 2010).

The Senate and gubernatorial data in Chart 1 feature relatively small sample sizes from cycle to cycle, particularly for governors in presidential years because most states hold their gubernatorial contests in midterm cycles. Thus, 2018 saw a lower percentage of successful renomination bids for sitting governors than in many cycles, but that came from just one loss (Colyer) out of 19 incumbents seeking renomination (not including independent Gov. Bill Walker of Alaska). Of the 23 cycles in the 1974-2018 period, a majority had no Senate and/or gubernatorial incumbent lose renomination. The 2004 gubernatorial cycle stands out on the chart, with a 78% renomination rate based on two losses in nine attempts for incumbent governors (the 2004 total includes Mississippi’s 2003 election). In that cycle, Gov. Bob Holden (D-MO) lost the Democratic primary against Missouri Auditor Claire McCaskill, who went on to lose narrowly in the general election (McCaskill is now seeking her third term in the U.S. Senate this November). Gov. Olene Walker (R-UT) also lost renomination in Utah’s 2004 race, failing to advance to a primary out of the state Republican convention in a race eventually won by Jon Huntsman (now ambassador to Russia). Walker had succeeded to the office when Gov. Mike Leavitt (R) resigned to join President George W. Bush’s administration, but her effort to retain the governorship ended in failure.

Just three cycles — 1978, 1980, and 2010 — had renomination rates below 90% for incumbent U.S. senators. Three Senate incumbents lost in 1978 and 2010, and four met defeat in 1980. In the case of 2010, challenges from the right led to losses for incumbent Sens. Lisa Murkowski (R-AK) and Bob Bennett (R-UT) while a party-switcher — Sen. Arlen Specter (D-PA, from R) — failed to win the nomination of his new party. Murkowski famously won as a write-in candidate in Alaska’s general election that year.

Most House cycles featured few incumbent losses, with renomination rates finishing above 98% in all but four cycles in the 1974-2018 period: 1982, 1992, 2002, and 2012 (note that the 2002 rate rounded to 98.0%). All of these cycles featured redistricting in every state with at least two House seats, which sometimes threw incumbents from the same party into the same seat or placed incumbents in districts with unfamiliar territory, making it easier for an intraparty challenger to defeat them. The most tumultuous cycle was 1992, which saw about 95% of incumbents win renomination. But that cycle also had a record number of retirements (66) and a host of newly-drawn seats that sought to provide better opportunities for minorities to elect representatives, which prompted many House exits (by primary defeat or retirement).

Although few incumbents lost renomination in 2018, much turnover in the House and governorships remains possible, even likely. In all, 58 House members have retired, second only to the 1992 cycle, and including open seats via redistricting in Pennsylvania and incumbent primary losses, 64 House seats will feature no incumbent running in November. Should Democrats make sizable gains in the House — they are moderate favorites to win the chamber — that will probably spell defeat for a fair number of Republican incumbents in the general election. As for the governorships, 17 gubernatorial contests have no incumbent in the general election (including Kansas, where Colyer lost), nearly half of the 36 seats that are up in 2018. Regardless of how November shakes out, new faces will abound at future National Governors Association meetings — and in U.S. House committee meetings, for that matter.

1. New York’s primary for state-level offices usually occurs on the first Tuesday after the second Monday in September. In 2018, this would have meant holding it on Sept. 11. However, concerns about conflicts with the Jewish holiday of Rosh Hashanah and 9/11 commemorations led officials to move the primary to Thursday, Sept. 13 (Delaware and Rhode Island also shifted their 2018 primary dates due the Jewish holiday). Since 2012, New York has held its primary for federal offices in June due to a court order regarding voting access for active military service members. Since this two-primary set up came into effect, politicians in Albany have failed to agree upon a date for a consolidated primary, making New York the only state in the country with separate federal and state primaries.

2. Crowley remains on the general election ballot in NY-14 as the Working Families Party nominee but is not actively campaigning.