The wreckage of the Democratic Party is strewn just about everywhere. President Obama’s carefully constructed 2008 Electoral College breakthrough is now just broken, a long-ago memory of what might have been a lasting shift in partisan alignment.

We have just entered the 2012 presidential election cycle, and the news is grim for the incumbent. While at least one recent poll gives Obama the lead against Sarah Palin, he is trailing in hypothetical match-ups against former Arkansas Governor Mike Huckabee and former Massachusetts Governor Mitt Romney. Even worse, only 38% in another recent poll said they believed Obama “deserves re-election.”

Take a look at this categorization of states that is based on the best estimate we can make of President Obama’s pre-election job approval level in each state. The Democratic states are those where Obama is still above 50%; the swing states have Obama between 47% and 50%; and the Republican states measure Obama’s job approval below 47%. Keep in mind that the president’s numbers are probably even worse now; they often drop after a devastating defeat such as the one Democrats suffered on November 2. 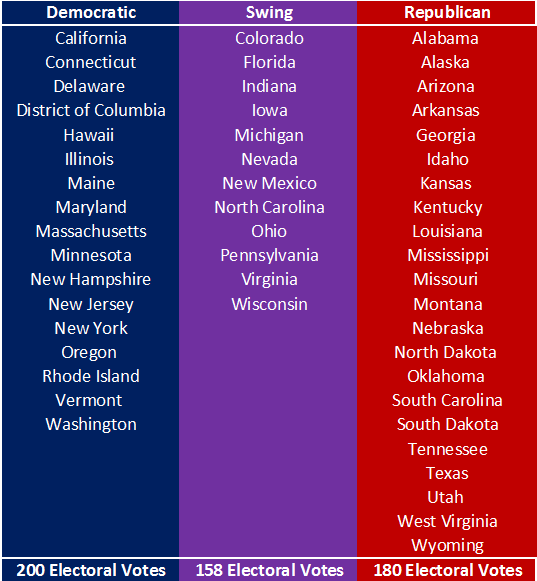 There’s only one logical conclusion to be drawn: President Barack Obama is down for the count, will have an early lame duck presidency, and will be out of the White House in two years.

Almost everyone agrees. Here’s a sampling of the domestic and international media opinion that has been pouring in:

Some cautious observers will argue that it is too early for such sweeping judgments. The economy might improve substantially, or the Tea Party-influenced Republicans could nominate a weak, out-of-the-mainstream candidate.

We beg to differ. If President Obama is smart, he will try to salvage his term in the White House by announcing now that he will not undertake a hopeless campaign for reelection, and instead form a bipartisan national unity government to try to hold the nation together until his successor, inevitably a Republican, is selected in November 2012.

CORRECTION: Due to sloppy research by our interns, the authors would like to clarify a couple of points. It turns out that all news reports cited above were not published in the last ten days, but right after the 1994 Republican midterm landslide. Every time “Barack Obama” appears in print, you should substitute “Bill Clinton”. The acronym “OTB” actually stands for “One-Term Bill” not “One-Term Barack”.

Nonetheless, we are quite confident in our assertions. President Clinton’s easy reelection to a second term in 1996 should imply nothing about 2012. The pendulum of American politics cannot swing so quickly in just two years, except maybe in 1994-1996.

Despite his upset victory over heavily favored Hillary Clinton in the ’08 Democratic contest and his easy win over a much more seasoned John McCain in November two years ago, Barack Obama lacks the political skills necessary to adjust to the new realities of divided government. Unlike Bill Clinton, Obama is an inflexible liberal who couldn’t find the center with both hands, even if his career depended on it. And there is no chance at all the new Republican leadership in Congress could over-reach and repeat the errors of Newt Gingrich and his allies. The GOP legislative caucus contains no core of rigid ideologues that might go too far and create an opening for Obama.

Historically, incumbent presidents who have sought another term have won them by a two-to-one margin. Those aren’t impressive odds. How many of us would bet on a horse with minimal chances like that? Since 1900 only one incumbent president whose party captured the White House from the other party four years earlier (Jimmy Carter) has been beaten. The other incumbent losers—Taft, Hoover, Ford, and the senior Bush—were from a party that had held the White House for two or more consecutive terms. But the key is that Carter and Obama are practically twins; both won the Nobel Peace Prize. Enough said. Moreover, the present moment is unprecedentedly perilous for an incumbent president. There’s really no comparison in the existence of the American Republic, save for about a dozen crises like the Civil War, economic panics, the Great Depression, world wars, and 9/11.

Democrats may also place false hope in the fact that the next presidential election will have a turnout twenty full percentage points higher than we saw in the midterm—probably about 40 million more people than voted on Nov. 2. No doubt these “midterm-missing” voters are disproportionately 18-34 years old and members of minority groups, segments of the population that backed President Obama by margins ranging from 62% to 95% in 2008. Obama can’t seem to get them to cast a ballot except when he’s on the ballot. Well, yes, he’ll be on the ballot in 2012, but they’re likely disillusioned with him, too.

Our readers should also give little credence to the following figure, which shows the relationship between the House seat change that has occurred in a midterm election, and the vote for the incumbent White House party’s presidential candidate two years later. True, it turns out that there is no statistical relationship between a midterm result and the outcome of the next presidential election. But surely, people understand the old axiom, “Lies, damn lies, and statistics.” 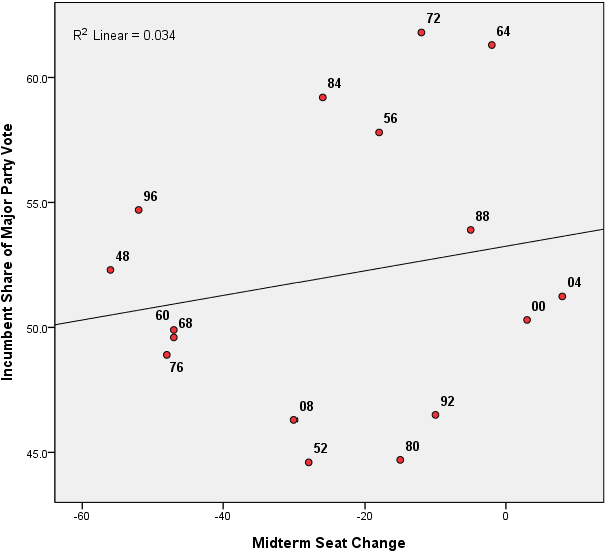 Despite the quibbles we’ll undoubtedly hear from predictable partisans, we are certain of our earlier declaration: Barack Obama, henceforth called OTB in our work, is a one-term president. We look forward to the many columns and television commentaries that will echo our conclusion.