Last week, the Crystal Ball updated some 2014 general election ratings in the Senate. The takeaway: Control of Congress’ upper chamber very much hangs in the balance.

As a follow-up, this week we’re taking a look at some important Senate primaries in states that are likely to have uncompetitive general elections. In heavily Democratic and Republican states, winning the dominant party’s primary is tantamount to election in November, which means the most important developments in these races will likely occur well before the fall.

One of the driving narratives in this cycle and in recent elections is the conflict between establishment and Tea Party forces within the Republican Party. This internal clash has prompted a number of primary challenges by Tea Party candidates against so-called establishment GOP incumbents, a pattern repeated in 2014.

However, most intra-party challenges, in both parties, will fail in 2014, as they have throughout most of modern American history. Since 1946, just 5% of incumbent senators seeking reelection have lost in their party primary. Interestingly, and as one might expect, just 2% of House incumbents seeking reelection have lost primaries in that same time period. Table 1 below gives the Senate data from each cycle between 1946 and 2012.

Notes: *The 2006 and 2010 cycles each saw one incumbent lose renomination in his/her respective party primary but then win the general election: In 2006, Sen. Joe Lieberman (D-CT) won as an independent candidate; in 2010 Sen. Lisa Murkowski (R-AK) won as a write-in candidate. “Defeated in party primary” includes loss of renomination by other means, such as a convention.

There are 28 incumbents seeking reelection in 36 total Senate races this year. Given the historical rate of incumbents losing in primaries (5%), that would mean the odds are that about one incumbent this cycle will lose renomination in his or her party primary, though of course the eventual total may be larger or smaller than that.

In fact, if one looks at the current playing field and the dynamics in each contest, it’s very hard to imagine more than three incumbents losing this cycle, at least at the moment. Currently, we only have three primary races featuring incumbents running for renomination where the incumbent is not at least rated “likely” to win: Hawaii’s Democratic primary and the Republican primaries in Mississippi and South Carolina. Overall, of the Senate primaries we have rated so far, only one is a Democratic contest while the rest are Republican battles. Below are our ratings for seven Senate primaries featuring incumbents running in states that are unlikely to be competitive in the general election. A potential eighth contest, a Senate primary in Wyoming, went off the board recently when Liz Cheney (R), daughter of former Vice President Dick Cheney (R), cut short her primary challenge to Sen. Mike Enzi (R). Enzi now has a clear path to renomination.

HAWAII (D): Appointed Sen. Brian Schatz (D) just outraised Rep. Colleen Hanabusa (D) again –$705,000 to $455,000 in the fourth quarter — and seems to be running the more complete campaign. There’s plenty of time to go before the Aug. 9 primary, but we think Schatz is at least a slight favorite to win the primary at this point. Given that, we’re rating the Democratic primary as LEANS SCHATZ, with the winner in the Democratic tilt likely to also be victorious in the general election. Ex-Rep. Charles Djou (R), a credible Republican candidate, is mentioned as a possible general election challenger, but he has yet to actually enter the race.

KANSAS (R): We hear occasional rumblings about how Sen. Pat Roberts (R) might be vulnerable to physician Milton Wolf (R) in a primary, but the evidence for this belief is scant right now. Let’s see if Wolf can raise the kind of money he needs to make a show of strength to outside conservative groups. The only polling we’ve seen comes with the obvious caveat that it was commissioned by the incumbent’s campaign, but the survey showed Roberts leading Wolf 69%-15% among likely GOP primary voters. Also worth noting is that while some other conservative groups have endorsed Roberts, the Club for Growth — despite having little use for the incumbent Roberts — has not waded into this race yet. We see the primary as LIKELY ROBERTS.

KENTUCKY (R): The Bluegrass State’s GOP primary is naturally getting a lot of attention. Politico led off its new “On the Ground” series on the hottest 2014 races with an in-depth look at businessman Matt Bevin (R), who is taking on Senate Minority Leader Mitch McConnell (R) on the Republican side. In light of the incumbent’s mediocre approval rating, Team McConnell is rightfully taking Bevin’s primary candidacy seriously. However, we remain very skeptical that McConnell could lose a primary or a general election during the sixth year of a Democratic presidency in a state where the president is so unpopular. Moreover, McConnell has a huge war chest he can use against both Bevin and, assuming he wins the primary, Kentucky Secretary of State Alison Lundergan Grimes (D) in the general election. We rate the primary as LIKELY MCCONNELL, matching our general election outlook.

MISSISSIPPI (R): For all the talk about Kentucky’s GOP primary, a place where there may be some real fire beneath the smoke is in Mississippi’s Republican contest. As it turns out, Sen. Thad Cochran (R) may be the most at-risk GOP senator seeking reelection. The 76-year old, six-term incumbent will face state Sen. Chris McDaniel (R), who has the honor of being the lone Senate primary challenger that the insurgent-backing Club for Growth has endorsed. Cochran, described as “an old-school appropriator” in a recent National Review article on McDaniel, appears vulnerable: Multiple polls have shown McDaniel either narrowly trailing Cochran or in a dead heat. At this point, we rate the Republican primary, which should be tantamount to election in the conservative Magnolia State, as only LEANS COCHRAN. There’s little question that Cochran is in some danger of becoming this cycle’s Dick Lugar — a veteran Republican who loses his primary because he is deemed insufficiently conservative by the party base. At the same time, most top GOP Mississippi officials are backing Cochran; they fear their impoverished state losing one of its only clear advantages — seniority on the Senate Appropriations Committee, where the bread is buttered.

SOUTH CAROLINA (R): After Cochran, Sen. Lindsey Graham (R) is probably the second-most endangered Republican incumbent seeking renomination and reelection in 2014. Graham has attracted criticism from the right for his efforts to work toward comprehensive immigration reform and his penchant for considering compromise in a number of policy areas. He easily survived a primary challenge in 2008, but his future is more uncertain this time around. Multiple Republicans have entered the race to take on Graham in the Republican primary, including state Sen. Lee Bright, businesswoman Nancy Mace, former congressional candidate Richard Cash and attorney Bill Connor. In most states, having a bevy of challengers would probably benefit Graham because all he would need is a plurality to win renomination. However, South Carolina requires the winner to get at least a majority to avoid a runoff between the top two finishers. Graham will want to avoid a runoff to prevent his opposition from having the opportunity to coalesce around one candidate. Luckily for Graham, it’s unclear as of yet whether his opponents, individually or collectively, are strong enough to truly endanger him, and the runoff is a mere two weeks after the primary, giving an insurgent challenger little time to consolidate opposition to Graham. The compressed runoff helped now-Rep. Mark Sanford (R, SC-1), a damaged, scandal-drenched candidate, win the GOP nomination in a special election last year. All that said, Graham’s tenuous position means we’re only comfortable rating this race as LEANS GRAHAM, with polling at the end of last year showing Graham only narrowly above the 50% mark.

TENNESSEE (R): Sen. Lamar Alexander (R) is another Republican that a number of conservative groups would love to defeat. But there’s little indication at this point that state Rep. Joe Carr (R) is a candidate who could do that. Carr got big-footed from a challenge to scandal-tinged Rep. Scott DesJarlais (R), so now he’s challenging Alexander. Typically, an overmatched candidate would take a step down in competition, but in moving from a House race to a Senate race, Carr went from an easier race to a harder one. Carr’s got a lot to prove; the filing deadline isn’t until April 3 if someone else wanted to enter the race. LIKELY ALEXANDER

TEXAS (R): Rep. Steve Stockman’s Republican primary challenge against incumbent Sen. John Cornyn (R) is what the word “quixotic” was invented to describe. So far, his candidacy has been a strange one, featuring a last-minute filing and an inability to win support from the conservative groups he would absolutely need to have any chance against Cornyn. Add Stockman’s recent overseas disappearing act to all this and there’s little reason to think Cornyn is in any danger. Cornyn has also been aggressive in treating even this minor challenge seriously, so he won’t be caught napping. SAFE CORNYN 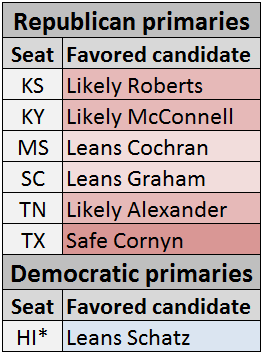 Note: *The Hawaii Senate race is a special election.