— As a result of Saturday’s jungle primary, the Crystal Ball has changed its rating for the Louisiana gubernatorial race to Toss-up from Leans Democratic.

— In a runoff against businessman Eddie Rispone (R), Gov. John Bel Edwards (D-LA) must turn out more black voters while retaining his crossover appeal with whites.

— Saturday’s primary offers the best evidence yet that political realignment is becoming a reality in Bayou State politics.

The nationalization of Louisiana

From its use of Napoleonic Code to its carnival celebrations, Louisiana is unique among the states. Still, this weekend’s electoral festivities proved that even the Bayou State is conforming to national trends.

Despite a healthy approval rating, Gov. John Bel Edwards (D-LA) was forced into a runoff. Edwards polled at 46.6% and will join businessman Eddie Rispone (R) in a Nov. 16 runoff. As shown in Map 1, Rispone took 27%, edging out Rep. Ralph Abraham (R, LA-5). 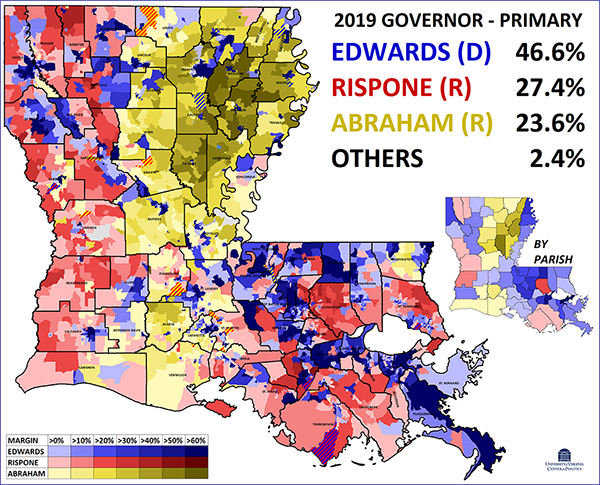 The widening urban/rural chasm that has dominated national politics since 2016 was evident. Formerly Republican strongholds in metro New Orleans swung to the governor while in the rice fields of Acadiana, he seemed to perform only marginally better than a generic Democrat.

Breaking down the election by congressional district illustrates how the election took shape (Map 2). Edwards’ 19.2% raw statewide margin meant that he carried five of the six districts. Abraham took a plurality in his northern 5th district, but ran behind Rispone in all the others, except for the Cajun LA-3. We noted in our preview last week that the race between the two Republicans might break along these two regional lines, and Rispone ended up attracting a bit more support statewide than Abraham.

Edwards combined with minor Democrat Omar Dantzler for 47.4%, compared to 51.8% for the Republican candidates (the remaining 0.8% went to Gary Landrieu, who has a famous Democratic last name but ran as an independent). Democrats took an overwhelming 81.5% in the majority-minority LA-2, but looking to the runoff, if the governor carries any Republican-leaning districts, LA-6 seems like the most likely option. Still, Democrats’ 46.1% in the 6th District was worse than their statewide 47.4%.

A persistent problem for Democrats in the post-Barack Obama era has been suboptimal black turnout, especially in the South; as a result, Democratic candidates have relied more heavily on college-educated whites. In Louisiana, this realignment has played out at the congressional district level.

Aside from LA-2, the Shreveport-based LA-4 would be most amicable to Democrats in the Obama era while LA-1, the wealthy New Orleans suburbs, was the most stridently GOP seat. In her 2008 reelection, former Sen. Mary Landrieu (D-LA) took 51% in the current LA-4 but just 43% in LA-1. On Saturday, Democratic gubernatorial candidates matched Landrieu’s 43% in LA-1 but fell to 40% in LA-4. Not surprisingly, LA-4 is significantly more African American by registration, at 33% compared to just 12% for LA-1.

As we explored last week, the conventional winning formula for a Democrat in Louisiana is 30% of the white vote combined with a 30% black electorate. Republican pollster and state analyst John Couvillon estimates Edwards took a relatively strong 31% of the white vote, but black voters made up just 26.5% of the electorate.

Edwards is tasked with energizing black voters while retaining his (respectable) support with whites — or at least mitigating his slippage with them. Additionally, Rispone has been willing to spend millions of his own money and will almost certainly be aided by the president.

In the wake of the 2015 primary, Republicans went into the runoff divided. Notably, then-Lt. Gov. Jay Dardenne (R) made a highly visible speech endorsing Edwards while denouncing the GOP candidate, then-Sen. David Vitter (R). Dardenne, a known commodity in Baton Rouge with a distinguished record in state politics, was effective at bringing moderate Republicans on board with Edwards’ campaign. Likewise, then-Public Service Commissioner Scott Angelle (R), who finished third in the primary, refused to support Vitter. This time, there seems to be no such disunity, as Abraham immediately endorsed Rispone following the primary.

Going forward, a promising statistic for Edwards is that, according to Inside Elections analyst Ryan Matsumoto, recent Democratic statewide candidates have gained an average of 7.7% between primaries and runoffs. The minimum Edwards would need, 3.4%, is toward the lower end of that.

We’ll be monitoring the runoff as it develops, but all things considered, the race feels like a Toss-up for now. Edwards outperformed other Democrats who ran for statewide offices on Saturday — they generally polled in the low-30s, compared to his 47% — so party affiliation still doesn’t entirely trump candidate quality in Louisiana. In an increasingly partisan environment, the question in November will be whether voters still see Edwards as a different type of Democrat.