— “Medicare for All” has been a major issue in the Democratic primary race. But it also came up a lot in the 2018 cycle.

— A regression analysis comparing the performance of 2018 Democratic House candidates shows that those who supported Medicare for All performed worse than those who did not, even when controlling for other factors.

— Democratic presidential candidates would do well to take heed of these results, particularly as the eventual nominee determines what he or she wishes to emphasize in the general election.

Medicare for All: A warning from 2018

“Medicare for All” has emerged as a key issue in the 2020 Democratic presidential nomination campaign. Two of the leading candidates, Sens. Bernie Sanders (I-VT) and Elizabeth Warren (D-MA), have made Medicare for All a central issue in their campaigns. Warren’s and Sanders’ proposals would abolish private health insurance in the U.S. within a few years and move all Americans into a government health plan based on the current Medicare program but with no copayments or deductibles.

Several Democratic candidates, including former Vice President Joe Biden, who has led in most national polls, have been highly critical of this idea. These candidates, along with a number of health policy experts and pundits, have attacked Sanders’ and Warren’s Medicare for All proposal as prohibitively expensive and politically unrealistic. They have also argued that embracing Medicare for All would alienate many independents and moderate Democrats and risk costing Democrats the electoral votes of several key swing states.

But 2020 is not the first election in which Medicare for All was an important campaign issue. It was also debated extensively during the 2018 midterm elections. By examining the impact of Medicare for All on the results of the 2018 U.S. House elections, we may gain some insights into how this issue could affect the 2020 presidential election.

Fortunately, we have very good information about the positions taken by Democratic House candidates on Medicare for All based on their responses to a survey conducted by a group advocating for this policy, National Nurses United. According to the results of this survey, 51% (219 of 429 districts included in the survey) of Democratic House candidates endorsed a version of Medicare for All supported by NNU — one that is fairly close to that proposed by Sanders and Warren.

Table 1: Support for Medicare for All among Democratic House candidates by district partisanship 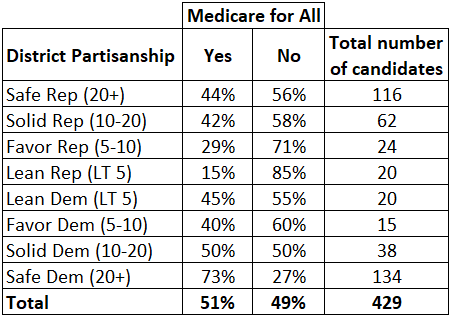 Notes: District Partisanship based on 2016 presidential vote margin. A handful of districts were not included because there either was no Democratic nominee or the Democratic nominee had not yet been determined at time of survey release.

Table 2: Outcomes of House elections by candidate position on Medicare for All for Democratic challengers and open seat candidates in competitive districts 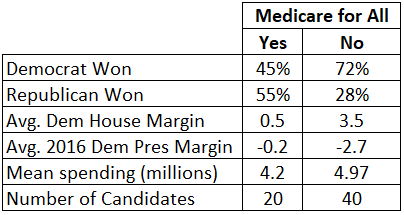 The evidence in Table 2 suggests that Democrats in marginal House districts were right to be concerned about the potential impact of Medicare for All on their electoral prospects. This table displays the relationship between the Democratic candidate’s position on Medicare for All and the election results in 60 competitive House districts — districts that featured no incumbent running or a Republican incumbent seeking another term where Donald Trump won or lost by a margin of less than 10 points. These 60 districts accounted for at least 31 of the 40 net seats gained by Democrats in 2018.[1]

The results in Table 2 show that Democratic candidates supporting Medicare for All did substantially worse than those who did not — winning only 45% of their races compared with 72% for the non-supporters. Their average vote margin of 0.5 percentage points was also somewhat worse than the average vote margin of 3.5 points for the non-supporters. This was true despite the fact that in terms of 2016 presidential vote margin, the districts of supporters were somewhat more Democratic (average Clinton margin of -0.2 points) than the districts of non-supporters (average Clinton margin of -2.7 points). However, non-supporters did spend more money on their campaigns than supporters — an average of nearly $5 million compared with an average of $4.2 million. 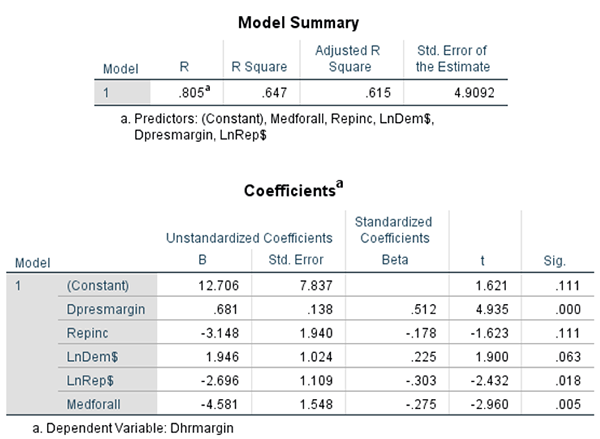 In order to further explore the impact of Medicare for All on the results of these competitive House contests, we need to conduct a multivariate analysis controlling for other factors influencing the outcomes. Table 3 presents the results of a multiple regression analysis of the House results in these 60 districts. The dependent variable here is the Democratic margin in the House election. The independent variables are the Democratic presidential margin in the district in 2016, a dummy variable for districts with a Republican incumbent (vs. open seat contests), the natural logarithm of Democratic campaign spending, the natural logarithm of Republican campaign spending[2] and, finally, whether the Democratic candidate supported Medicare for All.

The results in Table 3 indicate that after controlling for all of the other variables affecting the outcomes of these contests, Democratic candidates who endorsed Medicare for All did significantly worse than those who did not. The estimated coefficient of -4.6 indicates that support for Medicare for All cost Democratic candidates in these competitive districts almost five points of vote margin — a substantial effect in a close election.

An analysis of the impact of Medicare for All on the 2018 House elections indicates that Democratic challengers and open seat candidates in competitive districts who endorsed a version of Medicare for All similar to that proposed by Bernie Sanders and Elizabeth Warren did significantly worse than those who did not. This negative effect, close to five points of margin after controlling for a variety of other factors, was clearly large enough to affect the outcomes of some House contests.

It is possible that the estimated effect of Medicare for All was a byproduct of other differences between supporters and non-supporters. For example, supporters might have taken more liberal positions on a variety of other issues as well as Medicare for All. Even if that is the case, however, these findings are not encouraging to supporters of Medicare for All. They indicate that candidates in competitive races who take positions to the left of the median voter could get punished at the polls. Democratic presidential candidates would do well to take heed of these results, particularly as the eventual nominee determines what he or she wishes to emphasize in the general election.

[1] There were a few districts in Pennsylvania in which the party of the current incumbent could not be determined due to court-ordered redistricting.

[2] The natural logarithm of spending is used to account for diminishing returns on spending. This measure works far better than simple spending or difference in spending measures.