The 2014 midterm elections are a long way off but one thing is already fairly clear: Democrats face an uphill battle in trying to win back control of the House of Representatives. Thanks in part to their control of redistricting in a large number of key states, Republicans easily managed to hold on to their House majority in 2012. Despite losing the national House vote by well over a million votes, the GOP suffered a net loss of only eight seats in the House. So Republicans will go into the 2014 midterm election with 234 seats to 201 seats for the Democrats. This means that Democrats would need to pick up at least 17 seats to regain control of the House.

The midterm forecasting model predicts the change in Republican House seats based on three factors — the number of seats held by Republicans in the current House, the margin by which the Republican candidate won or lost the previous presidential election and the Republican margin in the generic ballot in early September.

I estimated the weight to assign to each predictor by performing a regression analysis based on the results of the 17 midterm elections since World War II. The results were:

The model was highly accurate in predicting Republican seat gains or losses. For the 17 midterm elections since World War II, it explained 94% of the variation in Republican seat change with a standard error of 9.8 seats. Moreover, two of the three predictors are already known for 2014: Republicans hold 234 seats in the current House and the Republican presidential candidate lost the 2012 presidential election by a margin of 4% of the major party vote. The only unknown is the generic ballot. We can therefore make conditional predictions of the change in Republican House seats depending on the results of the generic ballot in early September of 2014. Those predictions are presented in Table 1. 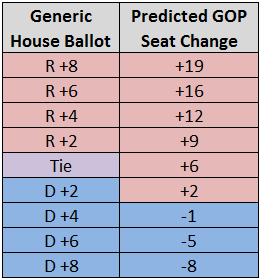 The results of the midterm forecasting model indicate that while Democrats have a real chance to buck the normal pattern of midterm elections and gain seats in the House of Representatives, they are unlikely to pick up the 17 seats that they would need to regain control of the chamber. That outcome would require a wave election like 2006 or 2010. But the 2014 midterm election is unlikely to be a wave election. It is much more likely to be a status quo election for the House of Representatives with one party or the other making a small gain and Republicans holding onto their majority.

These results indicate that neither party will have a large number of House seats at risk in 2014. Barring the emergence of a major national issue that results in a substantial advantage for one party or the other on the generic ballot, the seat swing in the 2014 House elections is likely to be fairly small. Nevertheless, the pattern of out-party gains in midterm elections is strong enough that, like Newt Gingrich in 1998, John Boehner may find his speakership in jeopardy if Democrats make even modest gains in the House elections.

*The generic ballot is a poll question asking whether respondents would vote for the Democratic or Republican House candidate in their own district without providing the names of the candidates.  For the purpose of estimating the forecasting model, I used generic ballot results from the Gallup Poll, which has been asking this question in midterm elections since 1946.