— District partisanship was by far the strongest determinant of the results of House elections in 2018, with Republican candidates typically running behind Donald Trump’s 2016 margins in all types of districts.

— Whether incumbents under- or over-performed was unrelated to ideology. Moderate Republicans actually were more likely to be defeated than those with solidly conservative records.

How the 2016 presidential results explained the 2018 House results

In my book, The Great Alignment: Race, Party Transformation and the Rise of Donald Trump, I argue that the United States has entered a new era of electoral competition in the 21st century. The most important characteristics of 21st century elections are partisan polarization and nationalized elections, and the results of the 2018 House elections provide striking evidence of both. The outcomes of House contests in 2018 were overwhelmingly determined by two factors — the partisan composition of House districts and the unpopularity of President Trump in many of those districts, including some that had supported him in 2016.

Democrats gained at least 40 seats in the House with one disputed election in North Carolina still undecided. This was their largest seat gain since the post-Watergate election of 1974. The data in Table 1 show that the large majority of seats that Democrats gained were in GOP districts that Hillary Clinton either carried or lost by less than five percentage points in 2016. 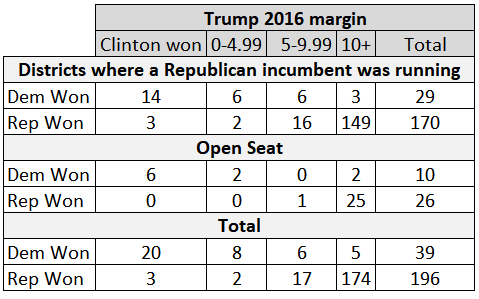 There was a remarkably strong relationship between the 2016 presidential vote and the 2018 House vote. Across all 394 House contests where there was both a Democrat and a Republican on the ballot, the correlation between Donald Trump’s 2016 vote margin and the Republican candidate’s 2018 vote margin was .97. The correlation was .93 in contests with a Republican incumbent who was running, .94 in contests where a Democratic incumbent was running, and .97 in open-seat contests. However, in all three types of contests, Democrats generally ran ahead of Hillary Clinton. Democratic House candidates improved on Clinton’s vote margin by an average of 3.3 points in districts where Republican incumbents were running and by an average of seven points in districts where Democratic incumbents were running or in districts where there was no incumbent on the ballot.

These results suggest that the outcomes of House contests in 2018 had very little to do with the characteristics of the local House candidates. In making their choices, voters apparently were far more concerned about which party would control the House than about who would represent their district. As a result, the advantage of incumbency reached its lowest level in decades — less than three points in terms of margin, according to an analysis by Gary Jacobson.

An important implication of these results is that the voting records of House incumbents may have had far less impact on their reelection chances than in the past. Even when members tried to appeal to voters from the opposing party by moving to the center of the ideological spectrum, they may have received little electoral benefit.

It is not surprising that moderate Republicans were more likely to be defeated than those with more conservative voting records because they tended to represent more competitive districts than their more conservative colleagues. However, the overall relationship between the 2016 Trump vote and conservatism among GOP incumbents was actually fairly weak — a correlation of only .28. In contrast, the correlation between the 2016 Clinton vote and liberalism among Democratic incumbents was a much stronger .66.

In order to estimate the impact of incumbent ideology on House election outcomes in 2018, I conducted multiple regression analyses using incumbent vote share as the dependent variable and incumbent ideological extremism (based on DW-NOMINATE scores) and 2016 presidential vote margin as independent variables. I did separate analyses of contests with running Republican and Democratic incumbents. The results are displayed in Tables 2 and 3. 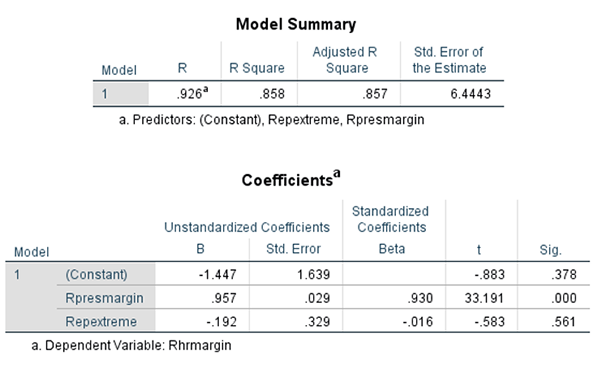 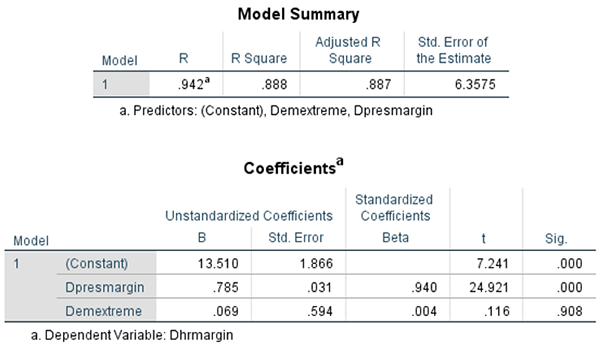 There is little evidence here that individual incumbents’ voting records affected the outcomes of their elections in 2018. After controlling for the partisan lean of their districts, measured by the 2016 presidential vote, ideological moderates did no better than those with more extreme voting records. In fact, among Democrats, the estimated effect of incumbent ideology was in the wrong direction — those with extremely liberal voting records did slightly better than moderates.

District partisanship was by far the strongest determinant of the results of House elections in 2018, with Republican candidates typically running behind Donald Trump’s 2016 margins in all types of districts. Some incumbents did better or worse than predicted based on the partisan lean of their districts. However, whether incumbents under- or over-performed was unrelated to ideology. Other factors such as media savvy, constituency service, and the strength or weakness of their challengers appear to have been far more important than incumbents’ voting records.

For some incumbents in competitive districts, projecting an image of moderation and bipartisanship may be helpful. Actually having a moderate voting record, however, does not appear to be helpful.