— In the second impeachment trial of his presidency, former President Donald Trump was acquitted by the Senate. Seven Republicans joined 50 Democrats in voting to convict Trump.

— The sole Republican running for reelection in 2022 who voted to convict Trump was Sen. Lisa Murkowski (R-AK) — she has a reputation as a political maverick.

— Democrats will be targeting a few open-seat contests next year in the Senate, specifically North Carolina and Pennsylvania, where retiring Republicans have been censured by their local parties.

— For now, Senate Democrats probably won’t see much electoral backlash from their votes, though Democrats representing Trump states may feel heat in 2024.

Over the weekend, former President Trump was acquitted by the Senate. Days before his term as president expired last month, the House, in a bipartisan vote, impeached Trump for inciting an insurrection at the Capitol. After a shorter-than-expected trial in the Senate — one which featured no witnesses — 57 senators, out of 100, voted to convict the former president. As this was short of the constitutionally required two-thirds of the chamber, Trump was acquitted.

Though Democrats control both houses of Congress, achieving a two-thirds majority in the Senate to secure a conviction was always going to be a tall order. It seems hard enough to get more than 60 votes in the Senate for any major policy these days — let alone for something as politically, and emotionally, charged as impeachment. 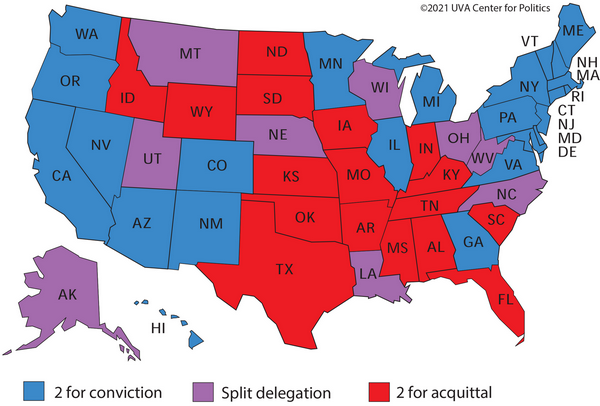 A month ago, when the Crystal Ball first looked at how Trump’s second impeachment trial may shape up, we noted that, in the Senate, his fate largely rested with Senate Minority Leader Mitch McConnell (R-KY). While he himself voted against conviction, many observers went into the process expecting fewer than seven GOP defections.

Given his standing within the caucus, McConnell could have likely whipped the necessary votes if he felt that barring the former president from running for office again, a potential consequence of conviction, was worth it. Instead, the minority leader made it known that, while he considers Trump responsible for January’s insurrection at the Capitol, he viewed the trial as out of the Senate’s purview: citing Article II, Section 4 of the Constitution, he argued that as a former president, Trump shouldn’t be eligible for conviction. Much of the GOP conference agreed.

Republicans up in 2022 mostly supported Trump

To a large extent, Republican hands were tied, as Trump is still a popular figure in the party. When he was on the ballot himself, Trump generated turnout that boosted Republicans down the ballot. In 2016, he arguably kept the Senate in GOP hands and in 2020, Republicans beat expectations in the chamber, only narrowly losing control. While Trump didn’t carry the states he needed for reelection, the rural turnout he inspired helped vulnerable Republicans in states like North Carolina and Iowa, while other red state Senate contests that seemed competitive — such as South Carolina and Montana — ended up as solid Republican wins.

The Republican senators up for election next year would very much like to have Trump’s base on their side. To GOP members, this would be helpful both in their primaries as well as in the general election, where turning out Trump’s voters, without the former president on the ballot, will be a priority. Perhaps not surprisingly, every Republican senator facing voters in 2022 was against conviction, with the exception of Sen. Lisa Murkowski.

Murkowski, in some ways, can be viewed as an independent who caucuses with Republicans. A moderate, she’s faced primary challenges since her earliest years as an incumbent legislator; she famously lost her 2010 senatorial primary, but mounted a successful write-in campaign to keep her seat that year. Murkowski seemed free to vote her conscience, as she won’t realistically be a favorite of the Trump crowd anytime soon — the former president has vowed to campaign against her. But the Alaska senator has put together diverse electoral coalitions in the past and, as the Crystal Ball outlined recently, the state’s new ranked-choice electoral system may insulate her from more ideological challengers.

Two of the top three Democratic Senate targets that the Crystal Ball identified in our initial 2022 ratings — Pennsylvania, North Carolina, and Wisconsin — are open seats. Both retiring Sens. Richard Burr and Pat Toomey voted for conviction but were promptly censured by partisans in their states. It’s a good sign of where the party is that Republican candidates running to replace them struck a much more pro-Trump tone. Former Rep. Mark Walker (R, NC-6), who’s framing himself as something of a consensus candidate for North Carolina Republicans, charged that Burr cast a “wrong vote.” In the third state, Wisconsin, there was no question that Sen. Ron Johnson (R-WI) would support acquittal. Though he’s still deciding whether to run again, Johnson is popular with conservatives in his bright purple state.

Last weekend’s vote may lead to some new maneuvering from Republicans who aren’t in especially tough races, too. One of the most surprising votes for conviction was Sen. Bill Cassidy — since his election in 2014, he’s generally supported GOP leadership. When asked for his reasoning, he simply summed up that Trump “is guilty.” While Cassidy isn’t up in 2022 himself, his colleague, Sen. John Kennedy (R-LA) is.

Kennedy got to the Senate by beating out several other Republicans in a 2016 jungle primary, in part because he was able to own the conservative mantle. It’s easy to see Kennedy criticizing Cassidy’s stance on the campaign trail, as he tries to preserve that image. After the vote, the Louisiana Republican Party immediately censured Cassidy but praised Kennedy.

As an aside, this type of contrast between Louisiana senators of the same party isn’t new. For the first eight years of her three-term tenure, former Sen. Mary Landrieu’s (D-LA) critics would often compare her to the state’s other member at the time, Sen. John Breaux (D-LA). Republicans would bash Landrieu as a New Orleans liberal, while Breaux was held up as a “conservative” Cajun Democrat.

Aside from Kennedy, the only other Republican up in 2022 who had a home-state colleague of the same party vote for conviction is Utah’s Mike Lee. Though he serves with Sen. Mitt Romney, a frequent Trump critic, Lee has a libertarian streak, and few question his credibility with conservatives.

If Republicans are concerned about their near-term electoral prospects with Trump off the ballot, the consequences of last weekend’s vote may hurt Democrats most in the next presidential year.

In a straight-party vote, the entire Democratic caucus voted for Trump’s conviction. Public opinion does seem to be on their side: according to an Ipsos/ABC News poll that was out Monday, about 60% of respondents agreed that the former president’s actions merited conviction.

So with the 2022 midterms on the horizon, impeachment probably won’t be a liability for many Democratic senators, as none of them will be up in states that Trump carried. But 2024 promises to be a much tougher cycle for Democrats. That year, they’ll be defending roughly two-thirds of the states with elections — and Trump himself could feasibly be leading the GOP ticket again.

For Republicans, the most obvious 2024 targets will be three Democrats who represent states that Trump won in both times he was on the ballot. Specifically, these are Sens. Jon Tester (D-MT), Sherrod Brown (D-OH), and Joe Manchin (D-WV). All three have been reelected because they’ve been able to cast themselves as different types of Democrats. Though the impeachment vote may well be a distant memory by 2024, Republicans will almost certainly point out that these members voted with their party when it mattered most.

Any competent Republican presidential nominee should carry those three states in 2024, so the electoral threat that those Democratic senators would face is clear. This vote could potentially complicate their efforts to attain the crossover support they’ll almost assuredly need in order to win.

Over the last two presidential election cycles, just one senator (Susan Collins in Maine) won while the other party’s presidential candidate was carrying their state. Even going beyond federal offices, aside from these senators, there are no Democrats left in partisan, statewide positions in Montana, Ohio, or West Virginia.

This isn’t to say that those seats will be sure-fire Republican flips. Though Manchin has, at times, indicated he may retire in 2024, the others won’t be pushovers, should they run again. Brown and Tester were reelected in 2018 after voting against both of the Supreme Court nominees that Trump put forward during the first part of his presidency.

For now, the Senate will return to its more routine business of considering President Biden’s nominees and negotiating another COVID-19 relief bill. But, looking to future campaigns, last weekend’s vote will likely figure into partisan messaging from both sides.