— Over the course of less than a year, the electoral coalitions in NC-9 shifted along regional lines, despite similar overall outcomes.

— Traditionally loyal to Democrats, the Lumbee Indians in North Carolina have emerged as a key swing constituency, and Democrats should not take their votes for granted.

Earlier this month, the final election of the 2018 midterms was settled, as voters went to the polls, again, in North Carolina’s Ninth Congressional District. While the race drew national attention, largely due to the election fraud allegations and litigation that prompted the do-over election, the overall result was mostly static from 2018 to 2019. In the invalidated 2018 election, veteran Dan McCready (D) came up three-tenths of a point short. In the re-do election, McCready lost another close race, by 2%. Compared to McCready’s 2018 Republican opponent, former pastor Mark Harris (R), state Sen. Dan Bishop (R) was able to make inroads in much of the district. Map 1 shows the changes in the results from the initial, invalidated vote in 2018 and the do-over from two weeks ago. 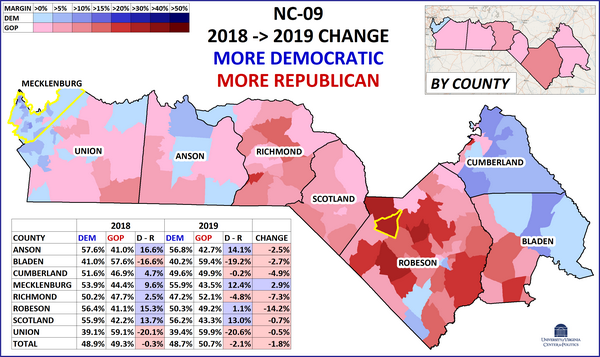 NC-9 spans a diverse cross-section of the state, but the three counties that most impacted the outcome were Mecklenburg, Union, and Robeson. In 2018, 75.8% of the votes in NC-9 came from this trio; in 2019, they increased their share to 77.8%. As overall turnout in the district dropped by 33%, it meant that these three counties punched above their weight in 2019.

In the western corner of the district, the Mecklenburg County part of NC-9 casts about 34% of the votes in the district. Ostensibly, the Mecklenburg electorate seemed full of contradictions; Bishop’s political base was here, but it was, ironically, the only county where McCready improved from 2018. The Mecklenburg County part of NC-9 (outlined in gold) overlaps almost perfectly with Bishop’s state Senate district, SD-39. These suburbs, formerly known as the “Republican wedge” in south Charlotte, served as a launching pad for former GOP Govs. Pat McCrory and Jim Martin. In the Trump era, though, suburban Charlotte has moved left, as the “Clinton Republicans” there have started voting more reliably blue. In 2018, McCready carried SD-39 with 53.6%. Despite losing by a larger margin in 2019, he improved to 55.4% in this area.

Just east of Mecklenburg County, Union County serves as the GOP bulwark in NC-9. Union is comparable to counties like Waukesha, WI or Montgomery, TX, as a large suburban county that has remained red even as many other suburban places have trended Democratic. For much of the 20th century, Union County was dominated by the textile industry; aside from an affinity for Richard Nixon, the mill workers here helped color the county blue. By the Reagan era, the Charlotte suburbs were spilling into Union County, bringing an influx of wealthier voters into to the western part of the county. This new constituency, coupled with the rural nature of the eastern part, put the GOP in a position to dominate local politics. Though McCready improved in the parts of the county closer to Charlotte, he performed slightly worse in 2019 than 2018. Union cast 32% of the district-wide vote; Bishop’s 60% share there helped cancel out his losses in Mecklenburg.

Robeson County is the most populous county in NC-9’s eastern region and has seen dynamic political trends in recent elections. Western Robeson is home to the Lumbee Indian tribe; once a monolithically Democratic bloc, the Lumbee are now, perhaps, the most overlooked swing voters in the state, and they are a culturally conservative tribe. McCready did well in the Lumbee-majority precincts in 2018, carrying them by 21%. This was quite a turnaround from 2016, when President Trump made major inroads with them. In 2019, though, Bishop won those same precincts by 3%. The Bishop campaign spent the vast majority of its resources courting voters in the eastern area of the district, and it showed in areas like this.

In Robeson County, precinct #35 houses the town of Prospect (outlined in gold on the map) and is a prime example of the electoral volatility of the Lumbee country. By registration, the Prospect precinct is about 90% American Indian, making it the most heavily-Lumbee precinct in the county, as North Carolina expert Michael Bitzer of Catawba College notes in the linked tweet thread. In 2012, despite winning statewide in a 12% statewide rout, Gov. Pat McCrory (R) took just 43% there. In 2016, McCrory was defeated, but won Prospect with 76%; meanwhile, looking down the ballot, longtime Secretary of State Elaine Marshall (D) managed to take 51% in the precinct (as shown in Map 2). McCready’s share in the Prospect precinct saw a similarly major shift; it fell from 53% to 39% between the two NC-9 elections. Though it may be tempting and easy to attribute these differences to fraud or hacking, especially given Robeson County’s colorful political history, these types of swings have come to characterize the Lumbee vote. 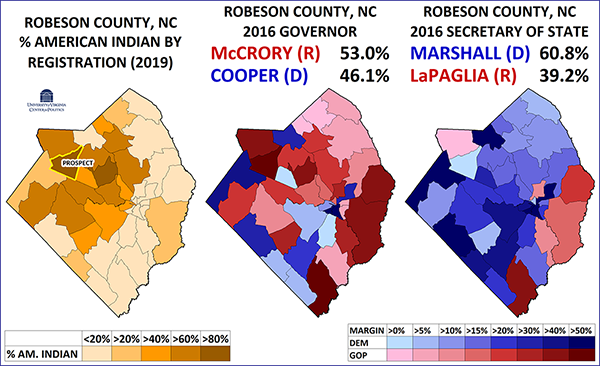 On one level, the NC-9 saga was very much a continuation of 2016 trends. Mecklenburg County is home to professionals with college degrees and upper-middle class families. This is exactly the type of demographic that has reacted poorly to Trump; they swung against him in 2016, and the leftward lurch continued both in 2018 and in 2019. Meanwhile, going eastward, McCready couldn’t match Barack Obama’s numbers with blue collar whites or with members of rural minority communities.

Conversely, as the saying goes, special elections are special. North Carolina is known for its close elections, and NC-9 has been stable. Sen. Thom Tillis (R) won his seat by 1.5% statewide in 2014, while carrying NC-9 by 12%. Two years later, Gov. Pat McCrory (R) was narrowly ousted, but carried NC-9 by the same 12%. If the Democratic nominee loses NC-9 by just 2%, they’re on track for a statewide blowout — something that rarely happens in Tar Heel elections, and something that this result does not necessarily predict for the future.