— Voters who supported Joe Biden are likelier to be among the strongest supporters of compromise than Donald Trump voters, and there also are markedly more women in this group than men. These voters prioritize taking proactive steps to address concerns they have about the nation.

— Trump voters are also likelier to be among those least open to compromise, and there are slightly more men among this group than women. These voters see compromise as contrary to their interests.

— A mix of both Biden and Trump voters are open to some kind of compromise, either among Americans as a whole or among members of Congress.

Identifying those most open to political compromise

That is one key takeaway from the latest analysis of our ongoing University of Virginia Center for Politics/Project Home Fire polling and data analytics project.

After looking at the divides in American life, including support for secession among a significant share of those who voted for Donald Trump and Joe Biden, and analyzing immigration attitudes as a key dividing line between the two camps, we wanted to highlight the kinds of people who are most receptive to compromise, based on our analysis of a survey project we conducted in late July and early August.

The committed compromisers group is made up of two-thirds Biden voters (66%) and just one-third (34%) Trump voters (see Table 1 below). Those in this group favor both Americans and their congressional representatives working together to find common ground and solve our nation’s critical challenges. They see ongoing conflict as a harbinger of bad things to come and disagree with the idea of a national divorce.

Meanwhile, about 3 in 5 (61%) of “Conflict Hard Cores” are Trump voters, while about 2 in 5 are Biden (39%) voters. They believe the other side has become too extreme for compromise and that their party’s congressional representatives should resist compromising with the other side. They reject the idea of prioritizing compromise over conflict, and the level of fear and distrust of the other side among this group is high. They see compromise as contrary to their interests, and present as seeing the benefits of their own interests as superior to the benefits of what compromise can offer (see Tables 2 and 3 below).

What follows is an explanation of how we came to these findings, and what they might mean for incentivizing compromise between Trump and Biden voters.

This analysis revealed that a surprisingly large amount of Biden and Trump voters (28%) — or more than 43 million Americans who voted in the 2020 presidential election as extrapolated from the results of this survey — self-select as “double receptives,” or what we call “Committed Compromisers.” That is, they strongly agree that “Americans must prioritize compromise over conflict to overcome our political divisions and address our nation’s critical challenges” and that “Republicans/Democrats in Congress should work to achieve compromise with the congressional Democrats/Republicans in solving America’s problems.”

On the other hand, we found 23% of Biden and Trump voters — more than 36 million Americans who voted in the 2020 presidential election, extrapolated from the survey — self-select as “double rejectors,” or what we call “Conflict Hard Cores.” That is, they believe both that “Americans on the political right/left have become so extreme in what they want America to become that there is no longer room to compromise with them” and that “Republicans/Democrats in Congress should resist compromising with the congressional Democrats/Republicans and seek solutions to America’s problems on their own.” 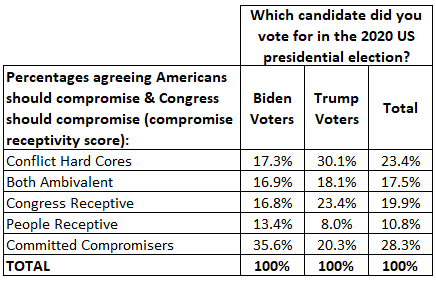 To better understand what most strongly predicts Biden and Trump voter compromise receptivity, we ran an analysis across almost 290 different variables. Focusing on the Conflict Hard Cores and the Committed Compromisers — those most inclined to block compromise or accelerate compromise, respectively — we find that those who reject compromise are motivated by a “fear of the other” mindset that manifests itself as hostility towards people on the other side, while those who prioritize compromise are disillusioned with what is happening because of the polarization and conflict that dominates our politics today.

Conflict Hard Cores do not see how compromise translates into benefits for them: This group overlaps significantly with those voters who are opposed to starting a dialogue on immigration, as well as those who are supportive of secession. More than 8 in 10 of these voters express some form of distrust for voters they associate with the other side, see elected officials from the opposite party as presenting a clear and present danger to American democracy, and believe they will experience personal loss or suffering due to the policies of the other side.

Table 2: Conflict Hard Cores/Committed Compromisers fear of the other statements 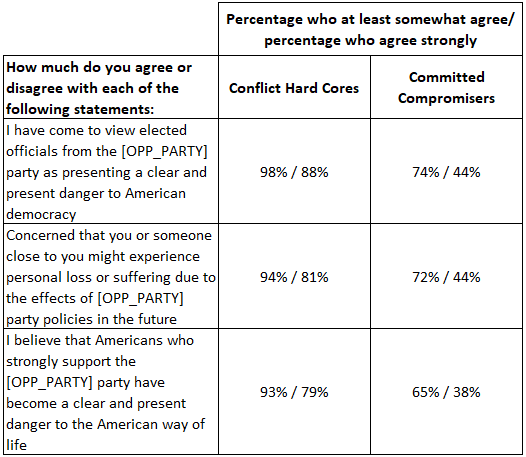 Committed Compromisers see compromise as a path forward. This group overlaps more with those voters open to a conversation about immigration that balances their interests with those of immigrants, and they are more likely to disagree with the idea of a national divorce. Those who prioritize compromise say they have spent a lot of time viewing video footage of the events that took place at the United States Capitol on Jan. 6, 2021, suggesting they are critical of those events. They reject the idea that the election was stolen from Donald Trump. Further, these voters set up as motivated by anxiety about what is happening in society and favor taking proactive steps to address systemic concerns they have — from addressing systemic racism in America to expanding access to voting in elections to investing in clean energy to help reduce carbon emission and combat climate change. 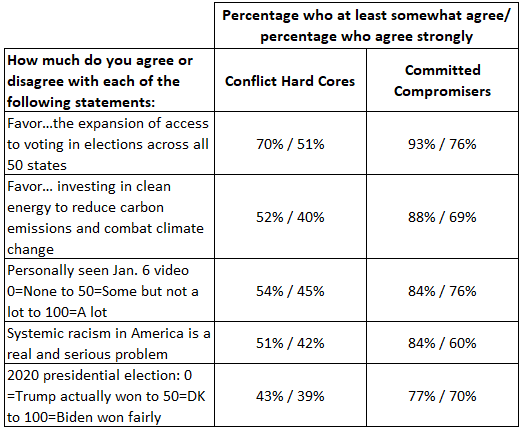 Note: The same 0-100 point scale described in the note under Table 2 is also used here.

Significantly, looking across both these groups it is women who are both less unwilling and more willing to favor compromise over conflict than men. Amongst the Conflict Hard Cores 53% are men, while 47% are women. Looking at the Committed Compromisers, 62% are women vs. 38% men. So, to a greater extent than women, men present as compromise blockers who are motivated by a fear of the other side and who are likelier to evince a winner take most attitude that prioritizes polarization, radicalization, and conflict. On the other hand, women are likelier than men to more strongly present as compromise accelerators who elevate comity and community over anger and alienation. Those in the Committed Compromisers group are likelier to want to take steps to address racism, expand voting rights, and protect the environment. These issues are powerful in predicting compromise receptivity. They speak to the concerns women have about what is happening in society and what it means for them and others. They rise to the goal of elevating an “others focus” that is consistent with their leanings towards compromise over conflict.

From conflict to compromise

Looking across the UVA Center for Politics and Project Home Fire releases to date, we see mounting evidence that the level of distrust that exists in our nation right now is unprecedented in recent history. It poses a real threat to the future of our democracy and our ability to address domestic and international challenges. Left unchecked we risk waiting until it is too late to find our way back.

We know there is a better way forward: We believe there are pathways for engaging people and moving them to action; bringing people together and moving forward based on our shared values and our long history together; challenging the jaded view that conflict is the only way forward; and building consensus and creating new solutions grounded in the motivations of compromise receptive Biden and Trump voters.