— Republicans are still looking for a challenger to Sen. Maggie Hassan (D-NH) after Gov. Chris Sununu (R-NH) surprisingly passed on running against her next year.

— Sununu’s decision to run for reelection means Republicans are heavy favorites to hold onto the New Hampshire governorship.

WMUR reported later on Tuesday that national Republicans’ likely second choice for the nomination, former Sen. Kelly Ayotte (R-NH), also was not going to run. Ayotte lost to Hassan by just 1,017 votes in 2016. Additionally, former Massachusetts Sen. Scott Brown (R) has also indicated he isn’t likely to run. Brown, who credibly challenged Sen. Jeanne Shaheen (D-NH) in 2014 after losing his reelection bid to now-Sen. Elizabeth Warren (D-MA) in 2012, said his family’s focus is on the congressional bid of his wife, Gail Huff Brown (R), who is one of several contenders for the Republican nomination in the state’s 1st Congressional District.

As of now, the only prominent Hassan challenger is retired Army Brig. Gen. Donald Bolduc (R), who lost a primary for the GOP Senate nomination in 2020. We do not believe national Republicans view him as a top-tier challenger.

Sununu’s surprise announcement is a reminder that we shouldn’t assume someone is running for an office until that person actually clearly indicates that he or she is in fact running. We had telegraphed for months our intention to move our rating in New Hampshire from Leans Democratic to Toss-up if Sununu entered the race, but we were waiting for an announcement. That’s why we kept New Hampshire at Leans Democratic last week even while we moved 3 other Democratic-held Senate seats, those in Arizona, Georgia, and Nevada, to Toss-up. With Sununu out, and with Ayotte and Brown remaining on the sidelines, we are going to keep New Hampshire at Leans Democratic for now. Candidate quality is likely more important for Republicans in the Granite State than it is in Arizona, Georgia, and Nevada simply because New Hampshire is a more Democratic state at the federal level: Joe Biden won the state by 7 points in 2020, while he only won the other 3 states by 0.3, 0.2, and 2.4 points, respectively. However, the political environment next year could be bad enough for Democrats that it may not take a Sununu-level challenger to beat Hassan.

There is still a ton of time for more candidates to emerge in the Granite State. The candidate filing deadline is not until next June in advance of a Sept. 13 primary — one of the latest in the nation. We can’t rule out the possibility that one of the heavy hitters mentioned above (Sununu, Ayotte, or Brown) will change their minds and decide to run after all, although because Sununu is running for reelection as governor we have to assume he has fully closed the door on a Senate bid.

Meanwhile, a bad development for the National Republican Senatorial Committee is a good development for the Republican Governors Association. Sununu’s decision to run for another term likely takes that race off the board for next year, and we’re moving the New Hampshire gubernatorial race from Leans Republican to Safe Republican. While Sununu’s approval rating isn’t as strong lately as it’s been previously, he ran way ahead of Donald Trump last year (see Map 1) and is likely strong enough to dissuade a credible Democratic challenge. 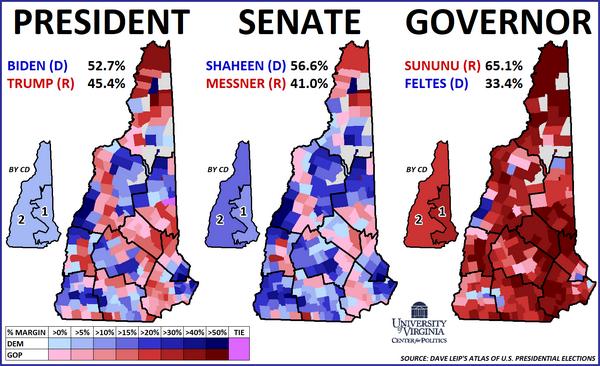 We’ll revisit this rating if a prominent Democratic challenger emerges. One person to watch in New Hampshire is Rep. Chris Pappas (D, NH-1). New Hampshire Republicans appear likely to make his swing district less Democratic, perhaps turning it into a Trump-won seat — which would make him incredibly vulnerable next year. Perhaps that could push him into running for a different office, including governor.

Meanwhile, Map 1 is also a reminder that New Hampshire is a state where voters still can split their tickets, and the state has frequently proven to be swingy historically. Hassan is still vulnerable next year, but she’s one of the few Democrats who has seen her prospects for next year actually improve in recent days.