Whatever price elected Republicans eventually pay for standing by President Donald J. Trump — and every party eventually pays at least some price for holding the White House — one could argue that Republicans have already gotten enough from Trump to justify backing him. In his always-interesting quarterly report, GOP lobbyist Bruce Mehlman has compiled some of the ways Trump has kept the Republican coalition together.

The biggest prizes for the right may be Supreme Court Justice Neil Gorsuch and potential Supreme Court Justice-To-Be Brett Kavanaugh. Assuming Kavanaugh’s confirmation, he and Gorsuch could be on the court for decades thanks to lifetime appointments. Anguish from the left over these appointments may lead to further escalations of the judicial wars in coming years, such as a future Senate majority mimicking and extending Senate Majority Leader Mitch McConnell’s (R-KY) successful 2016 gambit to not even hold a hearing on a nominee from a president of the other party, or a future president and Congress attempting to alter the size of the court for partisan gain.

Whatever happens, this much is clear: Lifetime federal court appointments are among the most valuable of partisan political spoils, and they are only increasing in value.

But does it have to be this way? Is there a way to de-escalate the judicial wars?

As part of a recent poll on money in politics conducted by Ipsos in conjunction with the Center for Politics (details on that previously released poll are here), we asked Americans what they thought about judicial term limits. More than two-thirds of respondents (70%) said they supported the idea. The details are in Table 1.

Table 1: Do you agree or disagree with the following statement? “Supreme Court Justices should have term limits.” 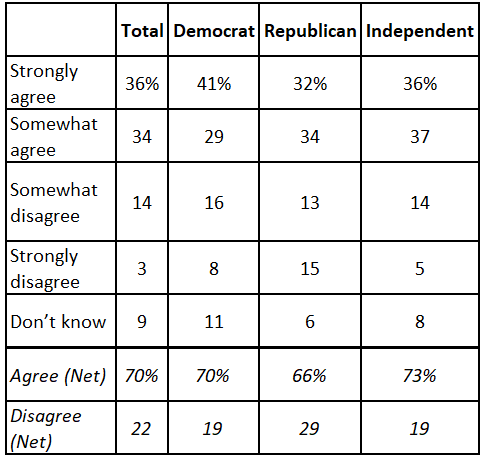 Reuters/Ipsos found similar levels of support for a Supreme Court term limit of 10 years in a 2015 poll. Back then, in the wake of the Supreme Court’s landmark ruling mandating same-sex marriage in all 50 states, Republicans were a bit more supportive of Supreme Court term limits than Democrats. Now, after the Kavanaugh nomination has increased the odds of a durable conservative court majority, Democrats are a little bit more inclined than Republicans to back SCOTUS term limits. As is often the case in politics, where you stand is based at least in part on where you sit.

That said, Americans typically support the idea of term limits, for judges or otherwise. For instance, term limits for Congress routinely attract levels of support as high or higher than what our poll with Ipsos found in support of judicial term limits. Currently 15 states have term limits for state legislators, most of which were implemented in the early 1990s as part of a national movement. Many states also tried to apply term limits to Congress, but the Supreme Court ruled 5-4 against congressional term limits in 1995, arguing that term limits could not be applied to Congress without a constitutional amendment.

Judicial term limits face a similar constitutional hurdle, and amending the Constitution requires a two-thirds vote in both chambers of Congress and support from three-quarters of the states. So are judicial term limits likely even though they are popular? No. But in a time of horrific partisan rancor and growing government dysfunction and partisanship, the American political imagination should open itself to at least considering seemingly drastic reforms.

In his 2007 book A More Perfect Constitution, Center for Politics Director Larry J. Sabato considered a slew of ways to change the United States’ guiding document. One of the proposals he considered was judicial term limits: specifically, a 15-year lifetime term for Supreme Court justices. What follows is a condensed and edited excerpt of the section of A More Perfect Constitution laying out his argument:

The constitutional principle of lifetime tenure during good behavior for federal judges is noteworthy, especially given the fact that almost all of the 50 states appoint or elect their judges for limited terms.

Not all state-based ideas are worth replicating at the federal level. The practice of electing judges is highly questionable. These races have become increasingly vicious, forcing judicial candidates to get down in the muck and attack their opponents on personal character matters. Partisan judicial battles can also produce a real conﬂict of interest by pushing future judges to take positions, while stumping, on issues coming before their courts later on.

Fortunately, we have no such problem at the federal level, where all judges are appointed — nominated by the president and conﬁrmed (or rejected) by the Senate. Yet in recent years, the federal courts have become divisive for different reasons.

The “least political branch,” a variation on Alexander Hamilton’s description of the judiciary often used by the civic texts, has become exceptionally political. How else to explain why every appointment now receives the kind of intense scrutiny formerly reserved for presidents, senators, and governors?

Some solutions can be found in the states, and several common practices there ought to be applied to the federal judiciary. First, lifetime tenure should be abolished. Some observers already insist that federal judges are not guaranteed lifetime tenure by the Constitution, which states only that judges should “hold their Ofﬁces during good Behaviour.” Others have noted that the president or Senate could request a commitment from any nominee to serve a limited term; but any such commitment would not be legally binding, and it is difﬁcult to see a set of circumstances that would compel a president or Senate to request a term limit.

In truth, the custom of lifetime tenure is now so entrenched that only a change in the Constitution can alter the practice. The late chief justice William H. Rehnquist once deﬁned “during good Behaviour” as “mean[ing], for all practical purposes, for life.”  Because of this, and as the judiciary has become almost as polarized along partisan lines as the elective branches, presidents have been seeking out younger and younger judgeship appointees at every level of the judiciary, hoping to inﬂuence the courts long after they leave the White House. The data on length of judicial service also clearly show that Supreme Court justices are serving in their positions longer, too. The ﬁrst chief justice, John Jay, stayed a mere ﬁve years, and his two immediate successors had even shorter tenures. Compare that with the 33 years served on the Court by Rehnquist. It is true that the fourth chief justice, the revered John Marshall, set the precedent for Rehnquist by staying on the Court for 34 years, but Marshall was the great exception in the Republic’s ﬁrst century. The ﬁrst 10 justices stayed on the Supreme Court, on average, a bit under eight years each, and the ﬁrst 90 justices left the pre-1970 Court, on average, after 15 years at age 68. By contrast, tenure of 20-plus years has now become the norm. As one Court observer calculated, Justices who left the Supreme Court in the period 1971 to 2000 served an average of 25.5 years!  Further, the average age of departing justices over that period increased considerably, from about age 70 to approaching the age of 80.

The insularity produced by lifetime tenure, combined with youthful appointment and long service, often means that senior judges represent the views and outlooks of past generations better than the current day. Therefore, a nonrenewable, lengthy term of 15 years is an attractive innovation, and the limit would apply to all federal judges, from the district courts all the way up to the Supreme Court. At the district and appellate levels only, judges approaching the 15-year limit could apply to the Senate for a ﬁve-year extension. These judgeships, while important, are a great deal less critical and powerful than the Supreme Court posts, so the prospect of ﬁve extra years for those judges who wish to apply for the extension seems reasonable and might ease somewhat the conﬁrmation burden on the Senate. One suspects that many lower-court judges, nearing retirement or preferring to rejoin the more lucrative private legal sector, probably would not request an extension. For those who ask for another ﬁve years, the Senate would need to reconﬁrm the judges by the customary majority vote. Much as we observe in the process of reconﬁrmation at the state level, though, many judges would be extended in ofﬁce without controversy and with a streamlined procedure, given the short length of the extension. The ones who are weeded out might well follow the state pattern; that is, overwhelmingly, the only judges not reelected or reconﬁrmed by the legislatures are those who have demonstrated serious personal problems or have proven tone-deaf to ethical challenges during their terms.

Undoubtedly, given the partisanship in the modern U.S. Senate, other judges would be denied extensions by being in the minority party in the Senate, assuming that party control of the upper chamber had switched in the ﬁfteen years since ﬁrst appointment. This is not a bad thing, since one of the arguments for term limits for judges is to ensure that the judiciary more accurately reﬂects the current makeup of the nation. After all, a single laggard branch can stymie reforms that the American people have decisively voted for; a Republican-dominated Supreme Court overturned much of Franklin D. Roosevelt’s New Deal efforts to combat the Great Depression, for example. Still, with some exceptions, the Senate would be unlikely to tie itself in knots about short-term extensions for most lower-court judges, even if partisan control of the Senate has changed hands over the 15-year period. Far more pressing business would normally take precedence.

Supreme Court slots are far more critical to the nation, and for that reason, the 15-year limit should be absolute — a lifetime limit. This is a long time to serve — nearly four current presidential terms, or about a third of the average American’s working life. At the same time, it is short enough to prevent justices from becoming too detached and generationally removed from the American mainstream. And as noted earlier, it is about the length of time the ﬁrst 90 justices served (on average) in the Republic’s ﬁrst 18 decades. Fifteen years is also long enough to permit both institutional memory and collective wisdom to develop within the Court, yet short enough to deter most justices from evolving a dramatically different philosophy or deteriorating beyond tolerable limits. The term might also ensure that presidents — and the rest of us — get what they have bargained for, whether a liberal or a moderate or a conservative. With the notable and rare exception of a justice like David Souter, who started afﬁliating with the liberals on the Supreme Court just a few years after his appointment as a supposed conservative, ideological evolution of justices usually takes considerable time, somewhat longer than a decade. While it is their right to evolve, there is also a touch of arrogance involved, not to mention the complete lack of accountability. Judicial independence must be honored and valued, but not to extremes.

Tremendous authority has been concentrated in the federal courts’ hands, especially in the Supreme Court, so much so that it is hard to believe that the founders would not have limited them in some ways had they realized what the courts would become in time. It is now appropriate to carry forward the founders’ preferences for checks on all centers of great power by making these constitutional changes in the Supreme Court and lower courts. It is time to bring the judiciary down from Mount Olympus — not to sea level but to an elevated pedestal within sight of the America they are sworn to serve.